Persona 5 is, of course, the sixth or the thirty-first game in the popular persona series, depending on how you count it. In the latest installment of the popular JRPG spinoff franchise, you step into the shoes of PeePee AdfHitlr, a teenager who was unfairly branded with a criminal record after punching a man who didn't even have hair. Fans have been eagerly awaiting this game since long before its initial promised release date of Winter 2005. But is this truly the worthy sequel to Persona 4: Dancing All Night that we've been waiting for?

Persona 5 has been in development for a long time, and despite its release on PS4, the age of its development often shows. For example, character models can seem a little simplistic when viewed up close, every reminder to save is accompanied by a warning to not remove the PS2's memory card, and characters frequently make excited allusion to the continued existence of the Twin Towers. However, if you can get past these minor annoyances, you'll find a deeply rewarding RPG experience. All your favorite numbers are there. Attack, Magic, Evasion... even Defense!

All your favorite demons from the wider Megami Tensei series are back. Both the one that has a huge visible dick and the one that is a huge visible dick. Blob guy. And of course, the woman ones where you can see the bottom side of the boobs. With the demon negotiating system, last seen in Shin Megami Tensei IV: Apocalypse, nearly every encounterable enemy is controllable in this game's battle system, where your character's HP is a precious resource. However, don't give up so easily: you can find a health potion inside a treasure chest and use it to get more HP. Health potions can even be used in battle!

TIP: Don't be afraid of restarting the game over and over to try and get the best starting persona possible! 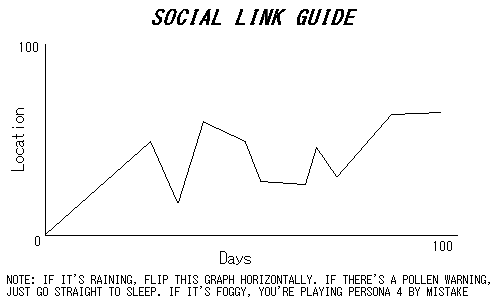 Some people are disappointed that Persona 5 wasn't released for PS Vita. Some people need to get a fucking clue.

The most notable aspect of the Persona series makes a reappearance here - I am of course referring to the sudden, unexplained appearance of predatory, goblin-esque homosexuals. Also making a reappearance are the numerous befriendable characters scattered over the game's overworld. You go up to them and press X and your friend level goes up by one point, or even nothing happens. Persona 5 features such characters as:

I have actually played Persona 5, which is weird and fairly unprecedented for my game reviews. With that said, I have not yet finished it, so PLEASE do not spoil it for me if there's a third girl.

Perhaps the most blatant changes from Persona 4 aren't major mechanical or plot differences, but the small quality-of-life changes. For example, you no longer receive invitations from your party members in the form of phone calls you either accept or deny immediately; instead, you receive text messages that you can accept or deny at your leisure. Also, instead of having to check your calendar to see when the deadline for the current dungeon is, you have a large "DAYS LEFT" counter in the top right of the screen. Plus, in a series first, you never see it coming, you see! That my mind is, too fast for eyes. You're done in, by the! Time it's hit you, your last surprise.

I'm coming
For you
My game's always so fast, so fine
You're spun in
By the net you didn't catch it in time

You'll never see it coming
You'll see that my mind is too fast for eyes
You're done in
By the time it's hit you, your last surprise

I'm coming
For you
My game's always so fast, so fine
You're spun in
By the net you didn't catch it in time