A Gripping Emotional Tribute to Milk 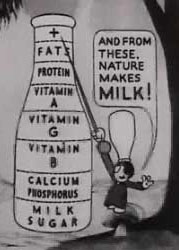 Milk is just full of essential vitamins. Anthrax on the other hand contains non-essential poisons. My expert medical advice: more milk, less anthrax!Since the dawn of time a couple thousand years ago, man has been turning to a wholesome variety of beverages for refreshment and dehydration prevention. The hallowed halls of liquid satiation are home to many a character, from water and juice to pop and coffee, all the way to alcohol and unstable growth serums. But perhaps the greatest drink occupying space in this imaginary beverage super castle that I draw pictures of in my journal is a little something called milk. Milk first appeared when it blasted out of the crotches of cows, captivating primitive man and undercover time traveler alike. The white liquid, when ingested, produced the pleasurable sensation of consuming liquid chalk. The delicious taste is only half the prize, though. Milk is also an ingredient in many popular food items as well as a healthy treat. Don't even forget for a second that drinking milk will make your skin as durable as rugged leather, just like the exteriors of cows.

As I mentioned, cows produce milk. How do these lowly bovine know how to make such a delicious and healthy drink? The answer, young man or woman, is that cows know a thing or two about taste. Your friendly neighborhood cow has been blessed with not one, not two, but four stomachs! You don't get to have four stomachs by taking the shortcut through flavor country. With four stomachs, you're traveling scenic routes all the way through the highway transpiration system of scrumptiousness. These bonus stomachs, coupled with the fact cows really don't have any valid purpose other than to be a source of food and drink, ensure that milk is quite simply the best, most ass kicking beverage available on the planet Earth and very likely in the entire solar system. However, given that our galaxy is named the Milky Way, it's a pretty safe bet that there is milk elsewhere in space.

I've already given some pretty good reasons as to why you should love milk with all your heart and soul, but since I don't know when or how to close a sale here are even more. For starters, just think about a world without milk. You'll quickly realize that a lot of your old friends are gone! These are just some of many dinner table All Stars that depend on the existence of milk: 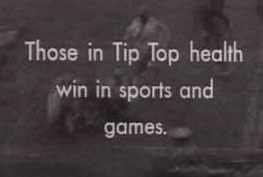 Peppy, strong, and healthy folks get and hold jobs everywhere!

Cheese
Cheese is grown from milk seeds planted in the ground. There would be a lot of empty fields without our good friend milk. You know what happens to empty fields? Not much!

Cereal
You can bet your britches that cereal is pretty much going to suck without milk. What are you going to use in place of milk? Peroxide? Soapy dishwater? Carbolic acid? Goat's blood? Obviously milk is the ideal choice for cereal.

Chocolate
Gasp, a world without chocolate? What are fat housewives going to cram into their faces when the latest soap opera development triggers an emotional avalanche? I'd suggest big handfuls of tiny spiders, but that just doesn't seem practical. I reckon a cork would be pretty practical. Face it, fat women like their chocolate, but without milk they just don't get it.

Various Types of Gravy
Thanks to some skullduggery on the part of Mother Nature; milk is a critical ingredient in milk gravy. Without milk there are going to be a lot of gravy boats going out to sea with no fuel. Surely you care about defending deliciousness enough to ensure that your gravy navy is fully armed and prepared to deal with any possible threat.

Ice cream
Can you imagine a land with no ice cream? I can, and it's called Communist China. Ice cream comes in many flavors and colors, including red, white, and blue. But it doesn't come without milk. I'm pretty sure a lack of ice cream alone would encourage millions of children to kill themselves. Just what the Communists would want!

Spousal Abuse
Amazingly enough, spousal abuse wouldn't exist without milk! You're probably wondering just how I snuck this into a list of foods, but I consider spousal abuse to be an intrinsic part of the dining process. How else will women learn whether or not they've earned their husband's approval? Well they can't if their husband is a damn weakling who isn't strong enough to offer up a solid punch. Milk would fix that problem by building strong bones and muscles.

Convinced that milk is the ultimate weapon in the war on thirst and hunger? You damn well better be! Short of freezing milk into an icicle and then stabbing you in the mouth with it, I can't think of a better way to make you add milk to your diet. It's not like it's expensive, either. Milk isn't that much more expensive than gasoline and it's much safer to drink. Also unlike gasoline, it's going to boost your muscles and make you strong like an experienced serial killer. You'll be able to snap necks with ease, as well as help out around the house and do more at work. A harder working you means a wealthier you!

Of course you might be one of those hippy types who believes that milk is a form of animal exploitation. Or worse, you might be lactose intolerant. As far as I'm concerned, these are not valid excuses. You only get stronger by sacrificing, after all. No pain no gain! And really, does it matter if it's your pain or the pain of an animal? Not to my knowledge it doesn't. Unless it's one of those sacred cows, in which case those should probably only be killed when no one is watching.

If you absolutely need more convincing, I recommend you watch the film "Tip-Top's in Peppyland" available for download at archive.org. It's a silent movie, but contains some lovely scenes of clowns performing semi-lewd acts in front of a minor, as well as disturbing voyeuristic cartoons of children working out and dancing. It also has some educational information on milk.

Something Awful's most sensible advice columnist is back with another intelligent batch of guidance. Be sure to stop by and read it or you'll break her poor heart. Here is one of the many questions that Helen confronts this week:

Helen, I just love your advice, and I have a real question for you. Lately I've been having a terrible problem with keeping my skin looking young. I have 3 kids to take care of and I'm pushing 60 but I still want to be sexy for my husband. How can I do this without using all of those yucky chemicals they sell ont he market these days?

Thanks, Wrinkle-Free in K.C.

Why yes, I'm still here and advocating that you read Helen's latest column! Do it!