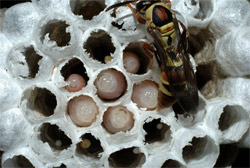 The only thing more horrible than wasps are their horrible babies. Look at them. They're pretty much asking for the hose.Kafir edged closer to the door, his helmet's visor down. The idea was that he would slap the door open and I would hit the surface of the door with the hose and deflect the water into the shed at the proper angle to douse the wasp's nest.

In retrospect I should have just burned my house down and collected the insurance. People throw around the phrase "utterly inept" a little too much. They use it to describe bad baseball teams or accounting errors. Utterly inept should be reserved for those almost magical moments when a human being (or two) is so completely bereft of any trace of eptness that nothing but calamity can follow.

I definitely should have burned down the house.

I took carefully aim with the spray attachment for the hose. I nodded my readiness. Kafir made his move, lunging forward and slapping the door with his splayed fingers. It slammed open and I squeezed the sprayer in my hand, unleashing a solid stream of liquid death on the wasps. Only the door had hit the side wall of the shed and had bounced closed again.

The stream of water rattled the shed like a drum and the door swung open very slightly. Just a tiny crack really, but it turned out to be more than wide enough to allow something as big as, say, a large bee to come rocketing out through the opening. Okay, it was more like ten giant and enraged bees. And they all made right for Kafir, who began to scream and flail his arms.

Sure enough, the wasps that landed on his arms and chest could not pierce his leathers with their stingers. The interesting thing about motorcycle helmets is that they aren't air tight. For a wasp the size of a lima bean, a sliver of exposed flesh around Kafir's throat must have been like a red carpet. I didn't realize it at the time, but nearly half of the wasps had almost instantly flown either inside the helmet or straight down the front of his motorcycle jacket.
A stream of muffled Arabic expletives and the occasional "fuck shit" emerged from behind Kafir's visor.

The neighbor I had talked to three times in the past was suddenly screaming and flailing his arms. I shot him with the hose almost instinctively as he collapsed in my neighbor's delicate flowerbed and began thrashing around in her pink and white perennials. I sprayed Kafir again with the hose as he struggled to open his visor and get at the wasps that were punishing his face with their insectoid anger.

Unbeknownst to me, the wasps on his body had been successfully dislodged by the hose and all of Kafir's flailing. These turned on their new enemy with the ferocity of tiny beavers with miniature knives tied to their tails. I dropped the hose immediately and began a hysterical dance as the wasps abused my body in ways indescribable in a decent society. How one of the wasps ended up in the leg of my shorts is something I'm not proud of, but for the next two days my groin was decidedly asymmetrical. 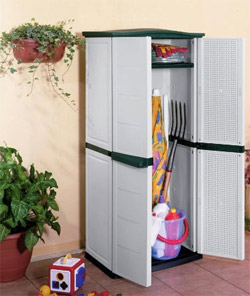 This is my shed, only replace the beach toys with angry wasps and all the plants around the outside with me and Kafir rolling around on the ground.Kafir managed to get the best of his wasps first, and he helped me defeat the last of mine by stomping on my chest with a white cowboy boot. A little fun fact on wasps: they can sting multiple times while being crushed beneath the toe of a cowboy boot.

An hour later, Kafir and I sat defeated on the old couch in my garage. We held a beer to various parts of our body, groaning and whistling as each sting reasserted its domination of our nervous system. Kafir didn't even open his beer. Despite his embrace of American culture, he still doesn't drink.

"We not talk of this again," Kafir advised.

He looked at me with his one good eye, the eyelid of his other eye having swollen to the size of a decorative gourd and become useless.

"Yeah," I agreed. "This never happened."

The next day I did what I should have done from the beginning. I closed the door of the shed, tipped it onto its front, and dragged it, Tiki torches and all, to a retention pond just down the block. The Canada Geese that like to cover our sidewalks in a thick carpet of their excrement scattered as the shed splashed into the murky water. I folded my arms across my chest and watched with satisfaction as the shed began to sink.

Only&it wasn't sinking. Whatever asshole designed the shed apparently made it seaworthy. I had just launched the wasp ark of my suburban subdivision. Going by the buzzing echoing from within the shed the passengers of the vessel seemed agitated.

I did what the situation called for at that point. I whistled nonchalantly and walked as quickly and as innocently as possible back to my house. Surely some sort of animal exists in retention ponds that can eat a shed full of Tiki torches and angry wasps.

What was that thing in Star Wars that lived in the garbage disposal? It's got to be based on something.