I can't believe we have to explain this. There are only eleven distinct versions of Watch Dogs (not counting the game's release on different platforms) with 23 physical and digital bonus items that you can get for buying specific editions of the game in certain places, contingent upon your purchase of the additional Season Pass. There's a chart with 253 fields to explain all the possibilities, including the incredible fact that it is not possible to get all 23 items with any version of the game. 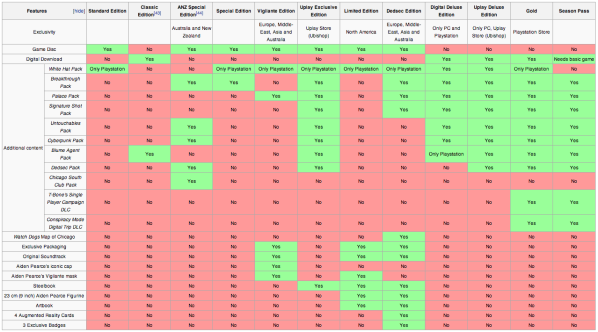 It's really not hard.

Yet some of you seem befuddled. Fine. Whatever.

Look, here's the best way to explain it.

If you want Aiden Pearce's Iconic Cap (a physical item) you need to buy the Vigilante Edition, which is only available in Europe, the Middle East, Asia, and Australia. Of course you'd like the cap. It's iconic. Everyone is buzzing about this highly compelling gruff white man and his baseball cap. People are already saying Aiden Pearce is the sort of hero that deserves a high-selling franchise with yearly installments for the next decade. You'll want to own the nondescript baseball cap at the center of this unprecedented international frenzy.

The Vigilante Edition also comes with Aiden Pearce's Vigilante Mask, another physical item. So it's obviously a great deal. But let's say you want the Vigilante Mask and the nine inch figurine. In that case you'll simply need to buy the North American Limited Edition. That won't get you the Iconic Cap, but it does come with exclusive packaging and the White Hat digital content pack.

Now if you want the White Hat pack and the augmented reality cards as well as 3 EXCLUSIVE badges, you'll just have to go to Europe and buy the Dedsec Edition.

One word of warning, however: That version won't come with the Chicago South Club Pack DLC (exclusive to the New Zealand Special Edition) or the Cyberpunk Pack, which comes with the Uplay Exclusive version as well as Digital Deluxe, Gold, and Season Pass.

Please note that the Dedsec DLC pack does not come with the Dedsec Edition. Hardcore fans who want to get their hands on the Dedsec DLC and the incredible steelbook case need to buy the Uplay Exclusive Edition.

Now, admittedly, things start to get tricky when you consider our upcoming games and how they interact with the Watch Dogs bonuses.

If you pre-order Far Cry 4 (also coming out this year) and Watch Dogs (NOT waiting until after release to buy either game) you will receive an exclusive untextured bazooka in both games. Better yet, pre-order the Game of the Year Edition of Watch Dogs as well as the Game of the Year Deluxe Edition of Far Cry 4 to get your hands on an extremely limited physical item: A 3/4th scale sculpture of a hamburger.

Let's say you buy Far Cry 4: White Savior Edition and the Watch Dogs Season Pass without buying the base game of Watch Dogs. You'll be rewarded with Crazy Hurk's Wacky Missions, a series of exclusive levels that continue the adventures started in a retailer exclusive Far Cry 3 DLC that only came with copies of the game sold in The Olive Garden. Please note that you will not get the Wacky Missions DLC if you actually buy Watch Dogs, and that any future purchase of that game will remove Wacky Missions from your Uplay account.

Purchase Assassin's Creed: Unity Alien MacGuffin Edition along with Watch Dogs Hackers With Rad Attitudes Edition to get a commemorative plate featuring incredible artwork of a man shooting a man.

Please note that if you want the Aiden Pearce Iconic Cup Cozy and authentic paramilitary lobster bib, you must purchase all four season passes for Watch Dogs (either Platinum or Newborn edition), Far Cry 4 (any edition but Ultimate), and Assassin's Creed: Unity (Golden Cloaca or Gun Shoot Many Man Then Scripted Cutscene Happen editions).

That's about it. Pretty simple, really. If you still need help for some reason, please refer to the clues we scattered in random copies of the Limited Edition Watch Dogs Pre-Order Information Pack.