Who's Gonna Protect My Internet Now? 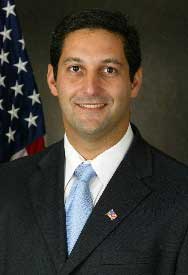 Oh Amit Yoran, who is going to help protect us from ourselves now?

We Americans sometimes take things for granted. For example, I've been taking my girlfriend for granted nonstop for about a year now, and I plan on continuing this until late January 2005 or until a near-fatal car accident reminds me of how precious and fleeting life is, preferably by having the role of myself played by Fred Savage. There's a whole box of crap in my basement that I've been taking for granted for nearly two years, mostly because my basement is teeming with mutated spiders and devil rats which have undergone extensive training by the Navy SEALS. I refuse to stop taking this box for granted until a team of strong, courageous men agree to venture into this deathtrap and eradicate the evil pests with rocket propelled grenades. The leader of Team Basement Liberation could be played by Olivier Gruner if he's not too busy starring in quality Cine Excel Entertainment movies such as "Vampire: Attack of the Vampire" or "Underwater Robotic Mechanized Assault Yeti Cyborg Legion 6: Return of Theo Huxtable."

Today I'll be fulfilling one of my sworn obligations as a legitimate media outlet by demanding innocent, sweetly brain damaged folks from around the globe begin to OH MY GOD PANIC IT'S THE END OF THE WORLD AND THERE'S NOTHING WE CAN DO AND WE'RE ALL DOOMED I TELL YOU, DOOMED! Once again everything we know and love runs the risk of being flushed down the toilet bowl of despair inside the bathroom of broken dreams by using the toilet plunger of eternal infamy because THE INTERNET AS WE KNOW IT IS DOOMED!

U.S. cybersecurity chief resigns - The government's cybersecurity chief has resigned after one year with the Department of Homeland Security, confiding to industry colleagues his frustration over what he considers a lack of attention paid to computer security issues within the agency. Amit Yoran, a former software executive from Symantec Corp., informed the White House about his plans to quit as director of the National Cyber Security Division and made his resignation effective at the end of Thursday, effectively giving a single's day notice of his intentions to leave. Yoran said Friday he "felt the timing was right to pursue other opportunities." It was unclear immediately who might succeed him even temporarily. Yoran's deputy is Donald "Andy" Purdy, a former senior adviser to the White House on cybersecurity issues.

As a famous philosopher once said, "you know the party is over when Amit Yoran leaves the room." Come back, Amit Yoran! We love you and didn't mean to hurt you, baby! Now some of you more ignorant and / or filthy folks out there may not be aware of the many, many duties Amit Yoran accomplished for each and every citizen of the Internet during his however long stay as the government's cybersecurity chief. In fact, some of you might not have even been aware that the United States had a cybersecurity chief! Well you know what folks? Protecting idiot Internet shlubs like you and me is hard work, and Amit Yoran spent a ton of sleepless nights devising cunning plans to make all our online experiences much more fun and safe, like riding a roller coaster through a hallway full of baby ducklings stuffed with marshmallows and pillows. Amit Yoran was probably one of the most overworked men in America during his tenure as the cybersecurity chief, and his duties included (but were not limited to): 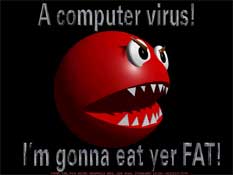 An actual image of a computer virus, the same one which murdered Balki Bartokomous towards the end of "The Langoliers."

Checking his own email and pressing the "delete" button when discovering any messages promising to deliver "teenage cream pies" directly to his desktop, shortly after giggling like a schoolchild.

Asking his secretary if he had any appointments scheduled for that particular afternoon, then saying "hmmmm" and thoughtfully tapping a pencil against his head after she reminds him nobody has ever called their office since moving in.

Pretending to talk to President Bush on his "PicturePhone," which was a regular phone with the word "PICTURE" written across it with a red Sharpie marker.

Occasionally scrawling down important Internet-related things on his cybersecurity notepad, such as "take out trash tonight" and filling an entire page with copies of the phrase "SO LONELY."

Briefly thinking about computers every time he passed a CompUSA.

Looking shocked and confused when his secretary would walk in, smell the air in his office, and ask him if he smelled something "really gross." 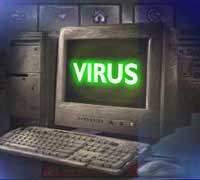 This is what your computer does when it is infected with a virus. You can tell because it says "VIRUS" on it.

The removal of suspicious VRML geometry which could possibly steal sensitive credit card data, such as the shady-looking blue cube that was repeatedly seen hiding behind the yellow cone whenever a user attempted to buy something online.

The phasing out of email and the introduction of "amail," where the "a" stands for "awesome" and the "mail" stands for "mail." Amail would be exactly the same as email, only there would be a line of text at the bottom that reads "THIS MESSAGE BROUGHT TO YOU COURTESY OF GEORGE BUSH" and a little clickable tool tip which offers such sound Internet advice as "when posting on the Internet, make sure you have an online buddy who will hold your hand and alert the proper authorities if you are abducted by a popup ad for free iPods."

Discovering a method to somehow physically eat birthday cake over the Internet.

Creating a color-coordinated set of warning alerts for the Internet that increase whenever something scary and threatening occurs, such as the discovery of an efficient email virus of the launch of a new Insane Clown Posse fan site. Level green means everything is okay and you may continue to download your erotic "Charmed" fan fiction text files, while level neon red means that if you even try to turn on your computer, John Ashcroft will personally kick down your door and throw your entire house in a specially constructed "Internet Jail," which is just like a regular jail only the wardens are a lot more obese.

Researching the feasibility of forcing computer manufacturers to install every piece of spyware, adware, malware, and computer viruses on their machines before they ship them out, thus saving users the hassle of inadvertently accomplishing the same thing over a time span of days, perhaps hours.

The creation of a governmental supercomputer which could scan and analyze the Shroud of Turin, thereby recreating a digital reproduction of Jesus through latent DNA samples left in the cloth, and releasing an Internet Explorer plugin which downloads this representation of Christ to your computer. This software, dubbed "iChrist," warns users when they are visiting any non-Christian site and is able to transform jpegs of blood into jpegs of wine. If you pay $15 and upgrade to the full, registered version, iChrist informs you of the latest sports scores and weather forecasts with "an outrageous Jesus edge." All Barabbus fan sites are automatically blocked.

This computer is very safe because it's disguised as a mailbox or something, therefore making it more difficult for viruses to discover.

Regardless, the Internet is back to its wild, untamable roots, much like that one Danielle Steel novel about the woman in the 1800s who traveled to a plantation in Louisiana and made out with a bare-chested man in a field of flowers shortly before learning it was her sister in drag and she had cancer and amnesia and was looking for her biological parents who she was separated from decades ago when a Lifetime Network camera crew showed up and abducted her to star in their original movie, "Mommy Where Are You? I've Been Abducted By a Lifetime Network Camera Crew: The Julie Clarke Story." So I guess it's once again up to responsible Internet citizens like you and me (mostly me) to make the online world a more safe and secure place. Luckily I am an Internet expert and know all kinds of smart shit about the Internet like IP addresses and how much glue it takes to fix a router, so I will offer up a few critical tips necessary to ensure your personal safety on the World Wide Web (FTP):

INTERNET SECURITY AND SAFETY TIP #1: Many dangerous viruses and worms use security flaws in the Microsoft Windows operating system to spread. Inspect your operating system at the end of each day for worms and viruses, periodically tapping on the monitor and listening for a wet, hollow sound. If your computer starts acting strange or you see any foreign residue on the bottom of your registry, call a trained Internet technician to come by and exorcise your computer or, if none are available, spray the inside of your computer with a garden hose until it smells like it's fixed. Don't worry about water hurting the CPU or anything; I saw a movie where some guy was swimming in a pool and a large piece of electrical equipment fell in it and he died, so that means computers like water.

INTERNET SECURITY AND SAFETY TIP #2: Another potential open door for viruses is email. Only open email if it's from a person you know and the title of the message is "NOT A VIRUS!!! REALLY!!! I SWEAR IT!!!" If you accidentally open email from an unfamiliar source, back away from your computer and begin shrieking like Donald Sutherland at the end of "Invasion of the Body Snatchers." Wait in your closet with the lights off until trained Internet technicians arrive at your house and disinfect your computer with a mixture of baking soda and Miracle Gro.

INTERNET SECURITY AND SAFETY TIP #3: Viruses often find it difficult to spread when your desktop is cluttered up with thousands of icons and programs running in the system tray. All these programs are distracting and confusing, prohibiting them from spreading as efficiently. Try to fill your desktop with links to every single exe file on your computer, then organize them into the shape of a really long maze with the starting point being "My Computer" and the end being the recycling bin. The viruses will come out of your computer, travel through the maze of program icons, and fall into the trash! As noted computer expert Kevin "pdf Dawg" Mitnik once said, "it's so easy to use, no wonder it's number one!" 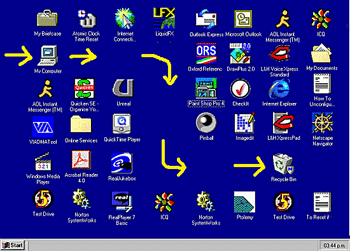 With this type of desktop layout, the viruses are trapped after entering your computer and have no choice but to flow straight into the trash.

INTERNET SECURITY AND SAFETY TIP #4: Don't fall for the scam of buying more RAM. This is one of the biggest swindles in the computer industry; the maximum number of computer viruses and spyware your computer can run is directly proportional to the amount of RAM you have! When buying a computer, refuse to accept it until they take out all the RAM and prove to you there's no secret RAM hiding in the case like behind the hard drive or in a dark corner next to the motherboard.

INTERNET SECURITY AND SAFETY TIP #5: If you notice a speed and performance drop on your computer after using it nonstop for six years or more, this is because you don't heave enough neon on it. Buy a translucent computer case mod and install as much green glowing neon on it as possible. If it still acts sluggishly, stencil something catchy across the side of it like "FRAG MACHINE" or "FRAG MACHINE 2000" or "MY GIRLFRIEND."

Alas poor Yoran, we will miss you!