This is a dark day for me, and believe me, I'm none too happy about what I'm about to say, but hear me out. As those of you who visited this humble website yesterday know, our own beloved Reid "Frolixo" Paskiewicz treated us to a saucy article about how crappy Renaissance faires are, and how he nonetheless goes every year. If you would like to read that article, you may do so by scrolling down to the bottom of this page. Not all the way to the bottom, though, or you'll miss it. I, however, did not read Frolixo's article about Renaissance faires yesterday, because I was too busy being at a fucking Renaissance faire. You have to understand how much this upsets me. See, as a writer for a semi-humorous website that gets its jollies by making fun of people who do things that are even the least bit socially awkward or unusual, the yearly Renaissance faire is like the Holy Land. It's a veritable Mecca of material. Everyone who attends these things - myself included - is, at least to some degree, a colossal dork. There is absolutely no way to attend a Ren faire and then not write about it the next day. Hell, that's the primary reason I went in the first place. I thought, "Hey, that's one more week where I don't have to think up my own article topic, unlike most weeks, when I just scan the headlines of wacky Australian news sites for some stupid news item I can drag out into a full length piece." I have to write about this thing. But, as fortune would have it, Frolixo beat me to the punch, through no fault of his own. It would be one thing if I thought what he said was way off base, but no, to my infinite shame I agree with everything he said. So here's the problem: it's two in the morning, I just got home from a night of post-Ren faire shenanigans, and I'm way too tired to come up with anything clever or fresh. So I'm just going to add in a few points of my own that Frolixo neglected to mention and call it a day. 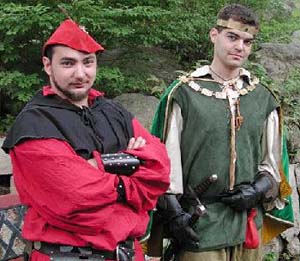 The most crucial aspect of the Renaissance faire experience that Frolixo touched upon, but didn't do justice, is the people. You have to remember that while there are those who go to Ren faires in normal modern street clothes, such as myself, these places swarm with people who dress in full Renaissance regalia and whose primary concern while within the confines of the faire is to purchase more accessories for their Renaissance regalia. As you may recall, everything sold within a Ren faire is insanely expensive. For instance, I saw a ratty leather coat today that might have gone for a hundred to a hundred fifty bucks at a novelty clothing store. At the faire, it was priced at nine hundred dollars. Nine hundred dollars. I've been on this planet for nearly twenty-one years, and I have never spent nine hundred dollars on any single purchase ever. I should make it clear that I have been in possession of no less than five cars in that time, and I can still say I've never spent nine hundred dollars on anything. Use that to give you some perspective. Nonetheless, there are hordes of people who shell out their life savings to buy incredibly expensive clothing that they only wear to go to other Ren faires for the sole purpose of buying more incredibly expensive clothing. Clearly, this is not an environment inhabited by people with all their cylinders firing properly.

I think that it may be precisely that reason that people who would not normally go anyplace public feel that the Ren faire is the perfect place to go. They figure, nobody there has any concept of what is normal and sensible to functional society, so who are they to judge how strange I am? That is why your average Ren faire attracts the most bizarre people on Earth. First you've got the ones who are just physically weird. These events call out the most oddly proportioned people you will ever see in one place in your life, with the possible exception of the Republican National Convention (see that? I'm lazy and topical!). Sure, there are your typical skinny guys and fat people, but only at a Ren faire can you see a nine foot tall woman in a bustier with breasts that register on the radar of overhead aircraft. Due to the peculiar nature of the clothing worn by so many Renaissance enthusiasts, every ounce of fat on many of these people is squeezed into one section of their bodies, creating all sorts of strange, undulated bulges. And as a rule, we're talking about a good number of fat people here. Let's put it this way, I saw two separate women who were so morbidly obese that they couldn't move without the aid of electric wheelchairs. On an average day, I don't see any people who are too fat to sustain their own locomotion. Today I saw two. And one of them was wearing a corset, although I'm not sure if you can really call it a corset at that point. Your typical corset contracts the wearer's waist, forcing the chestral region upwards and outwards, creating the appearance of a large and heaving bosom. This particular garment wasn't contracting shit, and if it was, I can only assume that without the corset, this woman would have been so large that the light currently emanating from your computer screen would be sucked into her gravitational field. 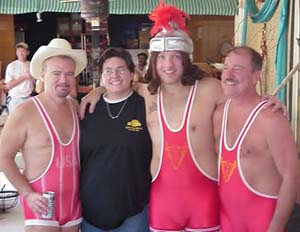 You don't have to be gay to go to a Ren faire, but it helps!

People tend to settle into one of a number of categories in terms of their involvement with the Ren faire experience.

For some people, just going to the faire in modern day clothing isn't enough. They need to prove to the costumed individuals around them that they are not one of them. These people will object loudly to anything remotely resembling participating in a Renaissance activity. For the record, "Renaissance activities" can include things like: acknowledging any of the wandering performers as anything other than college kids trying to make a few easy bucks, holding a sword, staff, or other prop for someone they know who came in costume, or clapping in rhythm at a performer's request to help out an act. Furthermore, the Haterz will not only refuse to play along, they will actively try to disrupt things by any means available to them, such as intentionally clapping out of rhythm or shouting random obscenities while a performer is juggling flaming knives over an audience member's head.

There are those who just go to enjoy the humorous accents and lively performances, but choose to stay firmly rooted in their own time period. These people can be distinguished by their T-shirts, blue jeans, cellular telephones, and vaguely detached smirks. They tend to make up a good portion of the crowd and are often seen as easy targets for performers looking to score some cheap laughs. 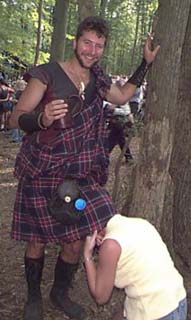 Don't worry, he's wearing underwear under that thing. Ironically, though, his underwear bears a photorealistic artistic rendition of his genitals.

Ren faires are typically bright, happy affairs. However, the Renaissance goths know that the Renaissance was only a time of joy and prosperity for a privileged few. The lower classes lived in squalor and servitude, fighting for survival against a constant onslaught of famine, cruelty, and plague. It was a black time for all, and dammit, somebody has to represent the truth! That's why the Renaissance goths will dress in only the blackest of medieval clothing, including capes made out of a cut up pleather trenchcoat and genuine sixteenth century boots from Hot Topic. The Renaissance goths will generally find one another and brood together upon the bleakness of life somewhere near the food court, while the rest of the people enjoy the experience that twenty-five bucks for.

The hardcore Ren faire patrons are the ones dressed better than the paid professional Renaissance actors. They've spent the last fifteen years perfecting the ultimate costume - the right tunic, the right chain mail, the right bracers, the right boots, the right headgear, the right crest, the right sword, the right plastic elf ears. Over the years, their obsession unites them, creating couples who then start coming in matched outfits. IF and when they manage to successfully spawn offspring, they will bring them along and dress them up as well. Beware of toddlers running around in authentic Renaissance outfits that cost more than your entire wardrobe.

I could go on and on, but frankly, two articles in two days about this topic is a bit much. Also, it's late and I'm tired. In the end, the Ren faire experience can be a positive one, as long as you go in with the right mindset. For instance, you know you're going to spend a shitload of money, no matter what, so buy stuff you can use! Unless your town is sacked by Vikings, you'll probably never get to use that Mighty Broadsword of Greater Cleaving that you bought for four hundred dollars. Just buy a souvenir shotglass, so at least you can drink until you forget the fact that you just dropped twenty bucks on two ounces of easily broken glass. And yes, get a bread bowl. Food of the gods.