The first major update to Microsoft's troubled tablet/desktop operating system was released on Thursday. While it's too early to tell if Windows 8.1 is a step in the right direction, there are certainly a lot of changes.

The traditional Windows Start button has returned. Unfortunately, it doesn't do what you might think - open a Start menu on the desktop. It doesn't even act as a shortcut to whisk you away from the desktop to the wholly separate Windows 8 Start Metro tile screen... thing. Instead, when the Start button is clicked it simply plays an amusing midi of a car horn playing La Cucaracha. 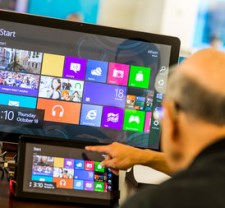 Tap, swipe, pinch! Or click, I guess.The 8.1 update brings a greatly improved tablet experience for your desktop. Windows 8 was an uncomfortable compromise between tablets and traditional desktop computers. Windows 8.1 has a stronger sense of identity. If you're using a PC, it will actively berate you for not being on a tablet. Friendly help messages will remind you to "Touch the screen already, dumbass" and "Swipe and pinch everything to make it better." Users who insist upon continuing to use a mouse will find that the device's driver frequently uninstalls itself as a helpful nudge to stop using computers. What are you, some sort of neanderthal?

Here's a fun Easter Egg: By default, the icon for every native Windows 8 application now depicts a YouTube personality making a very wacky face, often at an odd angle. To access this Easter Egg, look at an icon and see it.

When you perform a local search, Windows will now use Bing to pull in results from the internet. This is completely real and not even remotely a joke but it is way funnier than anything I will come up with in today's article.

Many first-time Windows 8 users found it surprisingly difficult to shut their computer off. First they had to activate a charm bar (accessed by hovering over one of the right hand corners of the screen), then they had to click a gear icon, then a power icon, then they finally had to choose Shut Down. Windows 8.1 simplifies the process. If you hover your mouse at a point exactly 300 pixels from the top of your monitor and 250 pixels from the left, then quadruple click, your computer will restart. When the PC powers off you must quickly unplug it before it turns back on.

Upon starting Windows 8.1 for the first time, you are asked to choose your favorite color. This is used as your desktop background. It also becomes the default text color across the system and in all applications. The color you chose is also passed along to Microsoft's advertising partners so that you can benefit from ads that are more accurately personalized. This color also becomes the default hue in your monitor's calibration profile, tinting absolutely everything to varying shades of the same color. If you click on the virtual head of Steve Ballmer (always located in the top right of your screen) he will shout that the color you have chosen is terrific and he's really excited to be here. 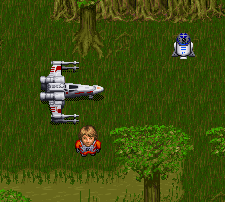 All of our readers will be delighted to learn that there is absolutely nothing in Windows 8.1 which blocks Yoda Stories from functioning. Microsoft has not placed a string of code in the OS update that specifically prevents users from enjoying the 1997 graphical roguelike. Updating to the newest version of Windows does not stop one from enjoying an infinite amount of simplistic randomly generated adventures as a chibi Luke Skywalker in his orange pilot jumpsuit. If you have enough space on your desktop you can even run four separate instances of the game at once and place them side by side.

As far as I can tell, this Yoda Stories functionality is the main selling point of Windows 8.1, and of Windows as a modern platform going forward. I can not in good conscience recommend the operating system for general computing purposes. I can, however, urge Yoda Stories power users to adopt Windows 8.1 and never look back.