About a month ago I wrote a pretty silly and fairly mindless piece here at SA that poked fun at the hype surrounding the Internet's new toy, Twitter, for which a real use hadn't yet been found. Naturally, this was like 3 or 4 days before the Iranian election, and then right after that Jacko ups and dies, so now everyone's all Twitter-this and Twitter-that. Yeah, I know, pretty dumb timing. I had failed to realize the true power of what I was so flippantly mocking. Here's this tool that is just humming along minding its own business, and then here's this sudden use for it that's so far and away beyond what I thought could've been possible. Think about it, could a small collection of people on the Internet cause a large population to revolt in disgust-- even in horror-- over what they were seeing before their very eyes? The answer is yes, but I'm not talking about political unrest, I'm talking about a few guys showing everyone else goatse.

For those of you using the Internet for the first time, to 'goatse' someone is to mislead them into viewing a specific classic picture of a guy pulling open his butthole with his hands. Before we continue, let me say that everyone knows that doing this isn't really funny and hasn't been for like 10 years, but for just a moment, consider the hot dog. A single hot dog is nothing special, it's bland and boring and mildly gross, but when some weird guy eats nearly 70 of them in a minute it's suddenly pretty amazing. Well, showing goatse to your idiot friend in Nevada is nothing, but showing Nevada is kind of special.

The evening of June 15, SA's own Abraham (owner of goatse.asia), mentioned that over 21,000 people viewed goatse within 5 minutes off a single man's single tweet:

Despite hoobastank_band's limited amount of followers, thousands of people clicked the link. The key here being the hashtags at the end of the Twitter post. When you're trying to follow a topic on Twitter, you often look for these in order to filter out the "im going 2 collage" crud-type posts. If millions of people are looking at certain hashtags, millions of people will see those certain posts.

Hoobastank, the band, how could you?!

Very often, in an effort to be the first to retweet the newest information on a topic, these links were retweeted again and again by people before anyone even clicked them. By the time they did, they and their friends had all goatsed their aunts and uncles and countless boatloads of people watching Twitter's trending topics. Add to that several copycats doing their thing, and before long Abraham was reporting that over two million people had clicked the tweeted and retweeted goatse links. That's about the population of Slovenia, four times the population of Sarah Palin's Alaska, or about one goatse for each hour the United States has existed. For a moment, it seemed that one-hit wonder band Hoobastank was responsible for the world's largest goatse-ing in history...

Thankfully, before anyone called VH1 to check, someone who can only be assumed to be the guy from Hoobastank got online and set the record straight. HoobaFans: He was not the gross link maker guy. It was someone else. He didn't do the attacks, no evidence. 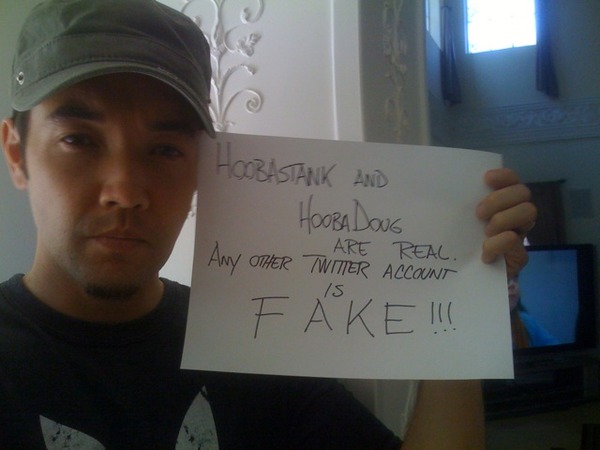 So there you have it. After probably several frantic phone calls between bandmates, agents, publicists, and web developers, the guy from Hoobastank took time out of his day to prove that he did not show millions of people a man's butt.

I'm really sorry, Twitter. I take back everything I ever said about you and your service. It's actually really neat.