A Look Inside the 1997 Family Matters Writers Retreat 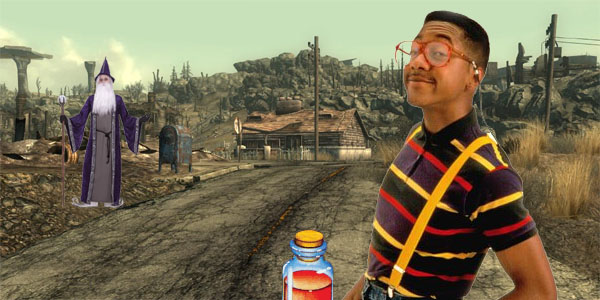 Okay, team. We're about to plow headfirst into season 9, and on a new network that isn't going to approve of the more "outlandish" stories we've been doing for the past few years. I swear, once you let one potion slip into a script, you start seeing the damn things on every page.

I wanted all of you to have a long, hard, think about this fact, and return with some down-to-earth, family centered story ideas to submit anonymously on these little cards. So let's just take a look at the first one: "Urkel-bot Finds a Potion." Okay, yeah -- this is what I was talking about. We jump to the weird ideas right away without thinking about what makes them interesting. Why would Urkel-bot need a potion? What would he do with it? Let's start asking ourselves these questions before we pitch.

Next card -- "Urkel-bot's Potion Hunt." Yeah, again, these ideas are getting a little too potion-heavy for me. We've been using the limitless narrative possibilities of potions as a crutch for too long, everyone. And we have plenty of characters that deserve more attention, like Laura, Carl, the Brother, and the other ones. Think, "What could they do with a potion?" Then replace the potion with a teen issue, like smoking in the car.

Okay -- yeah, thanks for this next one, Mike. "Uncle Jesse Hangs Out in the Past on a Cooler, Better Show Where the Writers Get Laid All the Time." We're all familiar with your three years on the House. I wasn't around to watch Michelangelo paint the Sistine Chapel but that's not my fault, either.

This next one says: "Steve and Carl Use the Internet to go Back in Time and Meet the Creator of Potions." There's a lot going on here. First, good use of our two strongest characters. Also liked how you worked something topical into the plot. But then we flush away all of that goodwill with another time travel story that somehow involves potions. Potions! Sorry, but -- is it possible for someone to have invented the potion? Aren't we just talking about specifically shaped glass containers with liquid in them?

Number five says "Trouble at Potion-Con '98" and we're going to skip it for now. 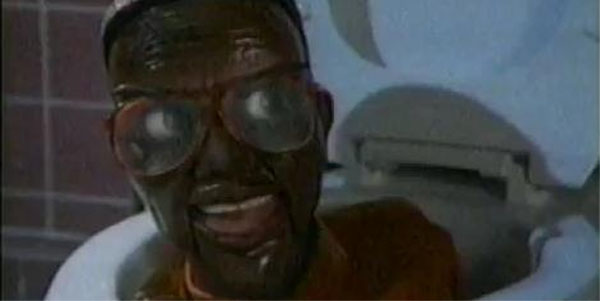 Back on track with number six: "Wizurkel Visits and Magic Ensues." Now we're making progress -- introducing a new character is a confident move for a sitcom in its later years. Again, we're trying to get back to more realistic stories, so could Jaleel be playing some sort of character that's more relatable and can't be tied directly to potions? I mean, I think "wizard," and I see one throwing back a potion. And that's not just because "potion" is the word I read the most everyday.

Getting down to our last few, we have -- come on. I had you guys take improv classes over the summer, but apparently we're still throwing out lame ideas like -- and it says this -- "That Thing with the Conveyor Belt on I Love Lucy, But with Our Characters." Okay, let's stop and think: won't people notice the blatant theft on display? Do you think this idea fits with our universe? Haven't we done this bit at least twice before? You all know the answer.

Okay people, this is it. We have three more days to figure out 22 episodes and all you've given me is garbage. If this last one doesn't at least have something salvageable, I'm fucking jumping ship to Meego. Let's see -- okay! "Carl and Harriet go to a Couples Retreat to Work on Their Problems." Yes, see -- this is what I was talking about! Down-to-earth, character-focused storytelling. Now, what problems do they have? That's for us to find oh hey there's another card stuck to the back of this one 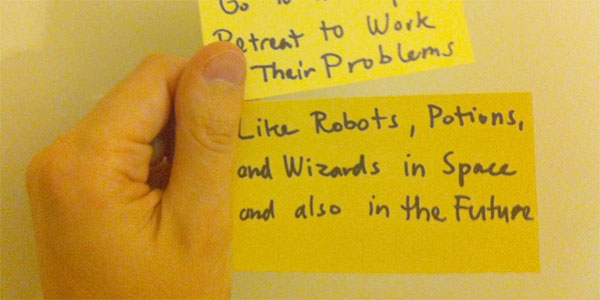