I, Batman's Armor, Am Voting Trump 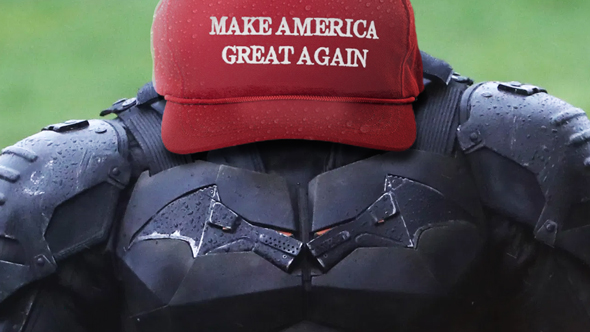 You've pushed me too far this time. I try my best to satisfy you people, but enough is never enough. While I was out here taking LITERAL BULLETS for Gotham City's greatest hero, all you CUCKS can do is laugh and point out how you think my shoulder pads make me look like a roller derby patron. Well guess what? This time the JOKE'S ON YOU, because you just lost my vote.
I was THIS close to voting Bernie, Biden, Obama, or whatever this year; but after all this abuse, I have NO CHOICE but to vote Trump. My armored, arrow-primed gloves have been forced by YOUR hand. My right to bear the arms of my owner's dead parents' killer within the cavity of the bat symbol is mine to KEEP, whether you LIKE IT OR NOT.
I try to be supportive of your cause, but while I'm strapped to The Batman's body as he prowls the night on his ultra-sick BAT-HOG, you people take every opportunity to bring us down. "Oh, the ears are too small, the cape's all wrong, boo hoo hoo!" We're out here going for a leather-bound crusader, badass guerilla look that you crybabies don't have the mental CAPACITY to appreciate. This Batman FUCKS without shame or recourse, so if my turtle shell muscle ripples are too much for your snowflake sensibilities than I guess you better PACK UP and MOVE TO CANADA, because I'm not going ANYWHERE. 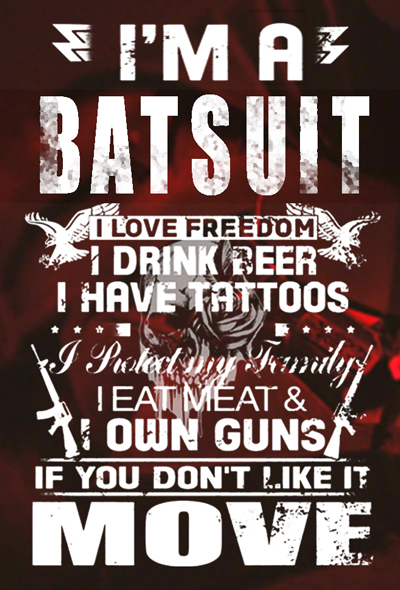 Hell, I don't think you people EVER had respect for me. It's always something, isn't it? First I was too blue, then my cowl was too restrictive, then my rock hard NIPS gave all of y'all a damn heart attack. Not to mention the many of you who scoffed at my BULK for the time my owner was taking on Superman. Meanwhile Superman's suit is getting nothing but praise, letting it all hang out like that. What do you expect? WHINERS, all of you. It's time to be PUT. IN. PLACE.
But who knows? Maybe I'll be swayed. Maybe if your kind really pack your shit together, show up at the next photo leak with the RIGHT ATTITUDE, I'll reconsider my 2020 candidate. It'd have to be one hell of an apology, though. We're talking "this Batsuit is going down in history as possibly the coolest design ever" kind of turnaround, because anything less and I'm going straight down Trump creek. LESSONS must be learned here after all. I demand nothing less than TOTAL RESPECT, as is every American superhero suit's constitutional right. The ball is in YOUR COURT, what will it be?