Notes From A ZOG Youth Rally 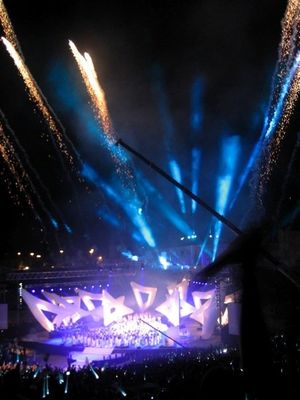 Bad DANCING! to really, really, ANNOYING music! The music was some sort of Israeli pop, and I was reminded that no matter how similar a foreign culture may seem to our own, there will always come a time when that culture pulls out a tattered shoebox of cassette tapes filled with synthesizer drenched dance-pop and you will realize that it has horrible taste in music. (Except Britain, which has always managed a competent imitation of American music.) In any case, the near constant fireworks mercifully drowned out the songs, so we all watched the dancers, dressed in skin tight silver outfits, stumble through an awkward series of hip-hop dance moves before suddenly clearing the stage because the Prime Minister had arrived.

Prime Minister Olmert took the podium and gamely worked through an extremely weak English-as-a-second-language speech that still sounded more coherent and poised then a presidential speech has sounded since January 19, 2001. His basic message was that we, as Jews, should consider Israel our true homes, and that we should move here, and build homes here, and get married here, and have children here, and get jobs here, and have children here, and remodel our kitchens here, and have a few more children here. Olmert's face was stony and he spoke with conviction. The problem of rising Arab populations and sinking Jewish populations in Israel is a pressing issue for his government. Their strategy for Israel's long term future directly involved the reproductive organs of everyone within hearing range.

He leaned over the podium, his brow furrowed, his fists clenched.

"Get drunk and have a lot of unprotected sex. Pop out as many little Jews as possible," he shouted. He pointed at us with a quivering finger and his voice was strong and proud. "I want you all fucking around the clock."

His speech ended, we all clapped, and he walked out again. The presenter thanked him, but didn't bother pretending to mean it. The god-awful music started again and women in leprechaun suits danced around the Stars of David. Some fireworks went off.

Then a man walked out on stage holding an acoustic guitar and led the crowd in a sing-along version of "Imagine". I watched thousands of Jews waving Israeli flags while singing "Imagine there's no countries. It isn't hard to do. Nothing to kill or die for, and no religion too."

Finally the show was over. My tour group agreed that it had been the worst Mega Event ever. We met by the exit, ready to leave, and were told that we wouldn't be allowed out yet.

So we sat together on big patch of dry, brown grass, and waited, and waited, and waited. None of the women in our group were pregnant; we were shirking our duties. Every hill, every tree, every piece of the landscape in sight was actually an Israeli soldier in advanced camouflage. My group sang "Wonderwall" with a group of off-duty soldiers as we all waited to be let go.