Great orbits of Jupiter, this crap never ends! kidsinister unleashes this horrifyingly inept attempt at a "Army of Darkness" joke. Okay, let's break this down and see where it breaks down. You have a blurry stretched out image of the Necronomicon in the background. That's definitely bad looking. You have title text that looks like it was ripped from a 1997 Geocities website for a Diablo clan. That's no good either. And what's this, a stupid quote written in ugly red Comic Sans thrown in at the bottom? Well that just takes the cake and shits on it. Forget the ugly edges around the hand and bowl, because they hardly stand out in the midst of this dreadful sea of all-encompassing ugliness. Your idea could have worked well if you spent more time on quality control and less time rushing to recreate the inside of your colon with Photoshop. 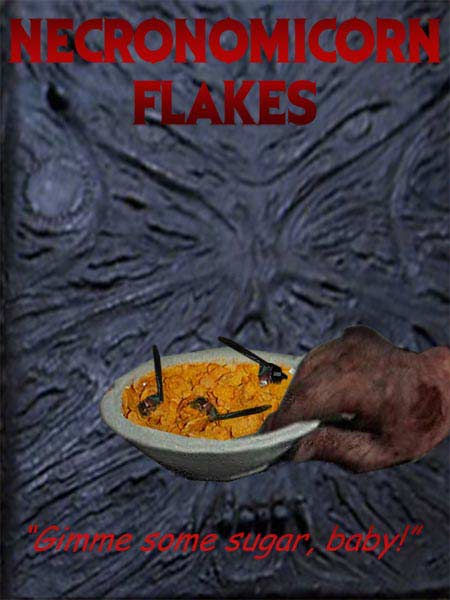 NaziPanzerPope made this fantastic "Deadwood" themed MS Paint collage. What's so awesome is that it contains lots of swearing. I think swearing is funny because you're not supposed to do it. But you can say anything on the Internet so the Internet is fun. And with swearing, you don't have to worry about anything else like making your jokes funny or look good. :) 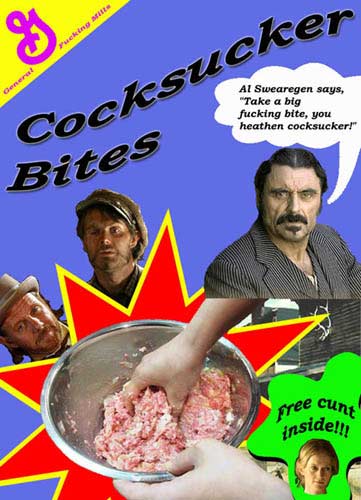 54Brizzavo takes us on a wild ride into the grandness of his imagination. Unfortunately his imagination is terrible at best and this agonizing mess is all he could come up with. I have to think that if 54Brizzavo found himself in the unlikely scenario of having to compete for his life in a rap battle with a resurrected but still brain-dead Terri Schiavo, she would school his ass something fierce. This guy's got nothing and it shows like a tire-sized tumor bulging out of his head. Aside from having terribly bad composition skills, this looks like the work of a serial killer who prefers to murder blank Photoshop canvases instead of prostitutes. This gruesome, filter-laden crime scene photo makes me weep. 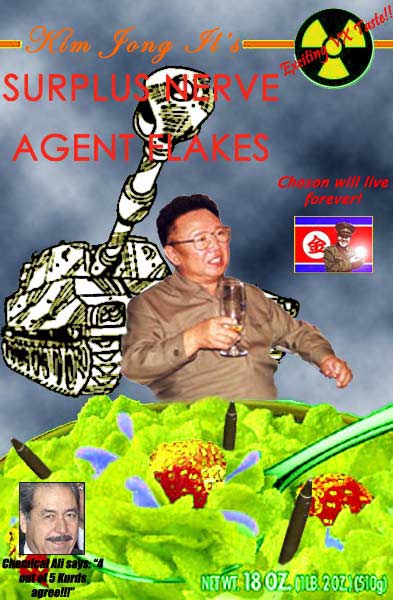 drunken_otter wins the "Wow, what were you thinking?" award for the week. I'm starting to wonder if there are stupid people out there that just have a huge stack of really shitty images pre-made and ready to submit regardless of the theme. Maybe they add a line or two to show some boring relevance, I don't know. Aside from the Kellogg's logo thrown in, what makes this look anything like a cereal box? Oh! Oh! Are those little circles supposed to be artsy? Come on guy, be realistic here! Look at a fucking box of cereal. Look at many. It takes a few minutes. Then look at yours and note how different they are. Baby eating jokes are lame enough, but this is just an abortion. Bonus idiot points for the "50% more Asian" comment, since racial baby eating jokes are always better. 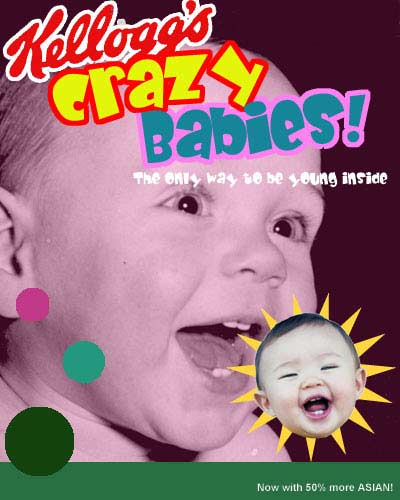 I'm going to say this is big salmon-colored letters because I consider it important.

IF YOU ARE GOING TO MAKE A PATHETIC, HALF-HEARTED, CLICHÉ, MORONIC JOKE, AT LEAST MAKE IT LOOK GOOD.

Okay, that's it for this week. Please come back next week because we'll be here and it would be awkward if no one else showed up!