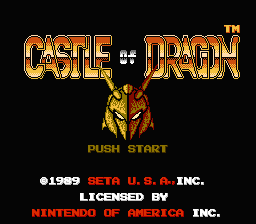 At a glance: I've noticed I've begun to completely disregard anything good about these games, and it makes me sad. You probably didn't it, unless it was a video game that you personally enjoyed in your childhood, in which case you've regressed to toddling around your house wearing diapers woven from ATARI wires. Don't be so glum! I hate every one of these games by default now, before I even see the box art! You would too, if you'd been doing this every goddamn week for a whole fucking year, and the toxic refuse you've stared at all day made your eyeballs slowly acidify and leak back into your eye sockets and liquify your brain and then the whole coagulated mess would dribble down into your nasal cavity and cause you to spew melted eye boogers everywhere until it caked solid so that you couldn't even breathe if you wanted to, which you don't, because if you have to stare at one more 8-bit fireball with a two-frame flashing animation you are going to fucking give yourself an enema using a rusty grappling hook and a vat of paint thinner just so you can be doing something more enjoyable for once, SO HELP YOU GOD.
Platform: Nintendo Entertainment System, 1989 (arcade port)
Know a terrible ROM? Email me! 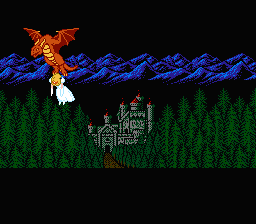 Two consenting adults.pngStory: There comes a time in every little princess's life when she starts to undergo the magical changes of womanhood. Her body starts changing, she begins to question Mom and Dad, and she spends three hours on her hair every morning even though nobody with a Y chromosome is going to bother looking above her neckline. It's a difficult time for many parents, as their beautiful young lady may run off with boys they don't necessarily approve of, such as 20-foot-long demonic dragon kings named DARKLARZA. That's the storyline of Castle of Dragon, and quite frankly it impressed me with its endearing, Lifetime movie-esque humanity.

On the other hand, the princess might have been K-K-KIDNAPPED!

Gameplay: You play as aKnightChaperone in Shining Armor, traversing across the lands in order to bring the princess home before curfew! This could be difficult, but fortunately the entire kingdom exists solely in the right-left dimension. The preferred strategy for killing enemies is scuttling forward, poking a few times, and then fleeing like a little bitch until it seems like a good idea to poke again. As an aside, I still can't figure out why the hell they bothered the give you a shield, as it's about as effective as a paper plate with a happy face drawn on it.

Graphics: I only have two concerns: 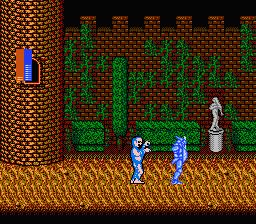 Speaking of social justice: Why is the fat guy with the dragon t-shirt shunned, but not the fat guy with the 12,069 zombie survival scenarios? I'd like to shun him. I'd like to shun him right off a cliff. Ordinarily I'd assume I was playing as some sort of transvestite obsessed with tanning oil. But that would mean... there were alternative sexual identities in Our Children's video games as early as 1990! Society as we know it would have crumbled! Then patched itself together again with thestickyickysaltyunholy fluids of fornication! Then promptly crumbled again! Gads! Someone fetch me some sherry, I've gone and worked myself up all atwitter.

Enemies: Zombies! Bats! Fireballs! Dancing skeletons! Hack-n-slash clichés! I don't even know why a dragon would be commanding zombies, except that they're both fantasy devices so overused that they've become nauseatingly trite. Unless, of course, DARKLARZA is a zombie dragon, which would instead be awesome. Science is still not sure why this works.

Fun: Say you're in madly love with a girl, unless of course you're already a heterosexual female, in which case stop ruining my fucking analogy. This woman is your universe, your sunshine, your semen receptacle. You slave for months, maybe years, to save up enough money from your pitiful paycheck to buy her a diamond ring. You finally show up at her apartment with a little gray box and a dozen roses only to find that this whole time she's been fucking DARKLARZA, the guy who sits in the back of the comic book shop with a rubber lizard tail clipped to his pants.

If you return the ring, exchange the cash for quarters, then spend the next 32 hours at the arcade playing 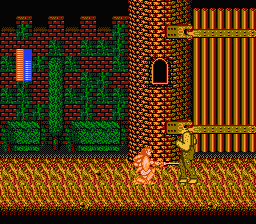 Let the good times thrust. Castle of Dragon in an alcoholic stupor, the act of converting your misguided love for that harpy into something equally worthless might register as "fun" somewhere in the remnants of your shattered heart.

Defining moment: It's been almost exactly a year since I took over the ROM Pit, and what a ride it's been! There's been laughter, there's been tears. There's been this guy sending me an email reading, "So I notice you are a lady that plays video games. This makes me very happypants. If it isn't too much trouble could you send me a pic?"Enthusiastic people have written letters detailing how awesome I am, which makes me feel cool until I get to the line where they invite me to their Twilight fanfiction community. Angry people have written letters detailing their desire to see me drawn and quartered, all of which I either laughed at or pretended to laugh at while sobbing all over my keyboard. Which is messy, on account of the melting eyeballs and all. Also because HP laptops are shit.

But I'd still like to thank all of you who have contacted me -yes, even those of you who may hate my guts and/or enjoy fucking stuffed animals, your feedback helps me bash my face against keys in patterns that fellow broken people find pleasing. And while I never know what kind of crap a ROM is going to spew my way, I take comfort in knowing that, from my first review to this one, one thing remains constant: the crotch-stab.

See you next week, you horrible dregs of society!