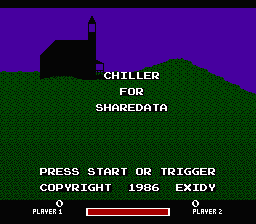 At a glance: Wow! A game from 1986 that's slathered with zombies and rhymes with -iller! I bet there are entirely artistic, non-ripoff-based reasons for that! Of course, that's where the innocence ends. Chiller was an arcade game that got a gorgeous UNLICENSED PORT to the Nintendo Entertainment System. Boy did I get excited when I read that, as every time I play an unlicensed game I am treated to a dreamworld of magic! A selling point for Chiller was that it made use of the Nintendo Light Gun, which was a large orange brick that you could chuck at the TV screen /a younger sibling whenever that goddamn Duck Hunt dog was laughing at you again. But the real reason Chiller is incredible is that it was so SPECTACULARLY gory! A GOLDEN PARADISE OF SIMULATED VIOLENCE!! Sign me up!!
Platform: Nintendo Entertainment System, 1986 (Ported in 1990)
Know a terrible ROM? Email me! 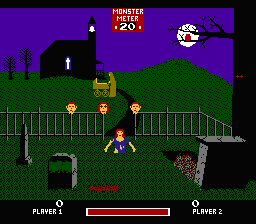 Here we see a monster in a monster of monsters, hiding behind a monster that's sitting on a monster.Story:Shit man, it doesn't need a story. It belongs to a proud tradition of media that throws together a shitty plot to cover up the reality that it's an excuse to hose guts all over the glazed smiles of its insipid fanbase. Movies in this fucking genre don't even need a plot. Just show a topless nun sawing some fornicating kittens open for an hour and a half and call it "FUCKSPLASH: THE RECKONING." The Chiller port pretends to have a plot and I am cranky because of it.

Gameplay: Hey, a non-moving and boring screen! You should move your cursor around to shoot deadly spooky creatures that don't ever actually attack you! The goal is to get the "Monster Meter" down from 20 to 0 by slaying twenty... monsters? Maybe. See, I used to think that "monsters" were "giant abnormal killer fantasy creatures," but thanks to Chiller, I've learned that most arbitrary scribbles can be considered terrifying nether-beasts, including but not limited to:

Whew! Thanks for the cryptozoology lesson, Chiller! To balance stuff out, the developers also included several things that are most definitely not monsters. Well, probably not, anyway. We're not ruling anything out at this point, as long as you keep a wish and a dream in your heart. 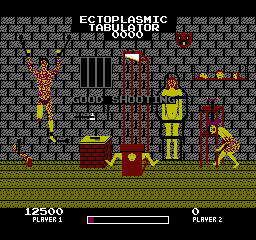 I sure showed THEM! Also I am glad that at the end of every stage the game congratulates me on GOOD SHOOTING, even when the majority of my target just sat there and secreted the Spraycan tool. And they wonder why kids who grew up in the 90's have overinflated self-worth.

Graphics: Thepictureslevels in this game are pretty well-colored for the time -all four of them. Movement really isn't this game's forte; a lot of your targets are forcibly restrained, which serves the dual purpose of allowing the programmers to be both lazy and edgy as fuck. In fact, the only thing they put much effort into is the gore on your stationary, presumably innocent victims. Your magical ghost-hunting bazooka blows off the flesh in bloodied chunks, with little white squiggles peppered in there. These are haunting images that will remain with me until I finally end my life through auto-erotic electrocution.

Creepiness: Just kidding; no one would be afraid looking at these images unless they had a phobia of jagged right angles. What creeps me out is that they clearly put way more effort into the gore than any other graphical aspect. The appeal was not LOOKING at scary gore but being the one EXECUTING the scary gore in-game; they wanted you to enjoy the experience of blasting open the face of some naked chick duct-taped to a wall. So I decree it "pretty scary in general, pretty tame in comparison to other Michael Jackson-related incidents." 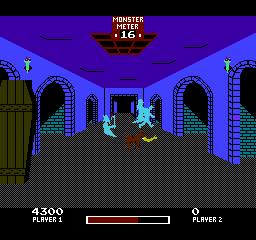 This doesn't really have to do with anything, but if you say "duck hunt" enough it comes out sounding like "dumb cunt."

Fun: I was going to argue that "staring at an unmoving screen and shooting at objects" was not high on my list of Fun Things to Do until -oops!- I remembered Duck Hunt. It really wasn't that different from Chiller, and I was fucking obsessed with that shit as a kid, although in my defense the targets in Duck Hunt had a tendency to actually move. A lot of it just floated on using the Light Gun, which I considered at the time to be almost as awesome as Ninja Turtles underwear. So I guess Chiller could have had an extremely enthusiastic audience -who knows, maybe even YOU liked it!

Well you were wrong and also dumb.

Defining moment: Both games feature smug-ass dogs, although Chiller's dog is more likely to trot away with a dismembered arm clenched in his teeth.