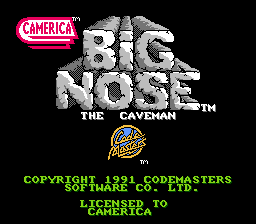 At a Glance: That was a fun weekend in the mental hospital! Now that I'm back with more antipsychotics than a drop of Keith Richards's urine, it's time to return to our exciting routine of "this game is bad please don't play it!" We've got it in spades -assuming "it" is "monotonous garbage"- with Big Nose the Caveman. I had never heard of this game, and is it happens, there's intensely good reason for that. But hey! At least it allows me to show off my considerable knowledge of dinosaur terminology. Gentlemen, start your engines! 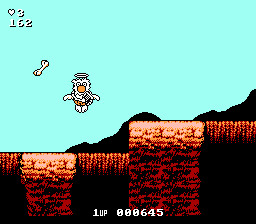 Sorry, sister, but you ain't goin' that way.Story: First off, I'm calling the ACLU, because I have never seen such a stereotypical portrayal of a Caveperson-American as Bignose in my life. Seriously, look at him. Anyway, the plot is that Bignose wants to eat a pterodactyl. Not just any pterodactyl; this one. Thus, he traverses far across four repetitive worlds, bypassing hundreds of other equally delicious and poorly-drawn ancient reptiles and putting me through two hours of agony in the process. Now, maybe it's just my tremendous bilateral brain here, but this is bullshit. Don't tell me that all old games had stupid plots; I can think of several classics that had serious, engaging storylines. Or hey, better yet: don't give it a plot at all! It's a goddamn platformer! Sonic the Hedgehog did just fine without a plot save "run fast and kill shit," and then they tried to make it furry Othello. Now look what's happened to the bastard.

Gameplay: I've been looking for a platformer that screws up side-scrolling even more majestically than Sword of Sodan did, and at last my wildest dreams have come true! In Bignose, the screen scrolls at an adequate speed, but

What finely-crafted artistry!only in one direction. That's correct: Once you scroll right, you can say sayonara to everything behind your little leopard print tush forever! So if you accidentally walk too far past the tree you have to climb up to jump over those conveniently-placed bottomless pits, tough theropod nads! The hazards in Bignose are rarely any more creative than said pits and dull enemies, but at least they have slicked Bignose's feet with astroglide to make things a little more interesting. Wait, no, that's bad! In addition, Bignose has slow reaction time, so if a monster zooms at you from behind, your only prayer is to hope that tunic is lined with kevlar intead of flesh-eating paleolithic fungus.

Thankfully, there aren't twelve hundred "modes" to Bignose; it's all straight-up platforming aside from "flying" levels wherein Bignose can't even about-face. There are "spells" and "upgrades" you can buy from charming shopkeepers, but for the most part, you'll be smackin' A to either beat things with your club or, should you have them, throw stones at biologically inaccurate baddies. I found it odd that you die immediately if you have your club, but stones apparently give you some magical power that allow you to absorb a hit and be reduced to clubness... until I realized that's a lot like the mechanics of Super Mario Bros., which, say, this game reminds me of a lot!

Graphics: I was going to go with "stegosaurus shit", until I realized this game was released in 1991, so I'm 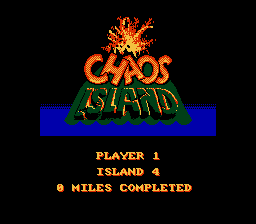 Oh hey, speaking of idiot kids' stuff that takes itself too seriously, have I cursed SEGA yet in this article? I have? Well then, this is just for luck: Fuck you, Sega. Whew, that always feels nice. Now where are my pills?upgrading that to "the soggy feces of a leprosy-infected Tyrannosaurus Rex after feasting on the used tampons of Wilma Flintstone." The dinosaurs and other prehistoric reptiles look like horrible genetic experiments out of a Japanese RPG, twisting and writing in agony. The coloring is bad, and while "texture" wasn't exactly in play in the 8-bit era, it's so hard to differentiate substances that you can't even tell what half of the hazards/features are supposed to be. Most of the backgrounds don't resemble anything even remotely professional, but something scrawled by this little guy on a tight budget. On the off-chance they were: Good work sweetie, A for effort! I'm sure you've grown into a fine man!

Enemies: A fantastic variety! ...of Things that Walk Into You. A tiny stegosaur, tiny dimietrodon, tiny remnants of my once laughter-filled heart, etc. For flavor, we also have Things That Fly Into You and Things that Just Sorta Sit There. As for the bosses, they're either laughably easy or so difficult you have to be able to magically predict their movement pattern before you can beat them. Regardless, I'm giving this game some bonus points because only a few bosses use projectiles, and as they say, "better the complete absence of a devil than the devil you're on fairly intimate terms with who enjoys lobbing fireballs, rocks, or condensed snot at you."

Fun: I can't really be angry at Bignose for sucking, because it's painfully apparent that the programmers did not

This part actually made me gigg- WAIT SO HE DOESN'T FUCKING EAT IT AFTER ALL OF THAT BULLSHIT give a damn. I mean, tapdancing Moses in lacey garters, how hard would it have been to program turning around? In addition to this, both bosses and levels are recycled several times in the whopping two to three hours of gameplay. Here's a boss from the first world, for example; here's one from the last! There's almost nothing exciting about any of the enemies, and some of the bosses are so dull they just add an invincible normal enemy so you don't fall asleep. To top it all off, the graphics are awful, and not in a "cute" way either. Shit, the game fails so hard at being cute that sometimes I suspected they were using some kind of screwed up cute reverse-psychology on me; had a giant tentacle rape monster straight out of The Land of the Rising Dong appeared while I was playing this, I would have squealed with delight and initiated a tea party. Even so, Bignose isn't torture, per say; it's simply a complete waste of time that would be better spent learning some kind of Life Skill, such as leech wranglin' or personal grooming.

Defining Moment: Toward the end of the game, the controls decided to go Linda Blair on me. I don't know if this was because I hit a rock with my club, hopped on a magic spot on the floor, or forgot to wash my hands after using the restroom, but the controls reversed for the long remainder of the level. That's right: I pushed right and Bignose went left, and vice-fantastica-versa. I don't think it was an intentional part of the game, as there are no other effects like that and it lasted forever, but who knows! I got to fight a boss like this, with hopping and dodging and frictionless feet. As obnoxious as it was, it was also the only part of the entire game that was even remotely interesting. Because of a glitch. Bless your hearts, lazy programmers. Shine on.