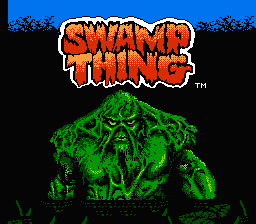 At a Glance: Hey hey hey there, Boss! Have I got a-- What? Rapta Red? Aww no, she's havin' a bit of a relapse, so I'm fillin' in fa' her dis week til they get a few more of them pills she likes so much. I ain't really sure what da hell she wants me t'do here, but dat's okay, cuz I got plans of my own, Boss -big plans! See, I got dis great idea here, fa' one of dem new-fangled "video game" tings, an' it's gonna make us more dollars than even da telephone numbers in my little black book! It's called Swamp Thing, an' da kids're gonna fuckin' love it. Seriously, baby, o' my name ain't Rey P. Mallenfritz! 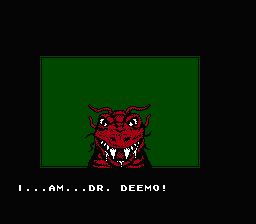 Now here's a muddafukka wit' a medical degree. Dat sends a good message to da kids, right?Story: Okay, so tink about it: Whadda all da kiddies love dese days? Supaheroes! An' what else do they love? Well, uh, if I had ta guess, I'd say biology class! So we'll make dis scientist fucka wit' a magic potion, see, an' a bad guy wants t'steal da potion, so in order t'get it he blows up da lab where da first guy's keepin' it an'-- Eh? Dat don't make any sense? Well don' worry 'bout it, we'll tink of sometin'!

So whateva, in order ta battle faggots o' sometin', our boy turns inta dis walkin' pile o'mold -but it's SUPER mold, see- an' like, his powas are dat... Well fer one, he walks real slow, y'get me? I mean real slow. Oh! T'make him REALLY super, whaddya say he can't fuckin' jump either. Ain't dat fantastic?? An' on top of all dat, he's super-ugly! He'll be like Batman, except insteadda a bat, he's got da powa of my papa's wet socks! Not mine, of course; I got da ladies ta look afta me.

Gameplay: Okay, so ya're wanderin' through da swamp like a jackass because (REY: Don't forget to fill in an 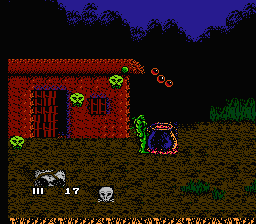 Obviously, standin' on da scaldin' hot metal of da cauldron ain't gonna hurtcha, but pokin' dem tiny little bubbles will. I go f'realism in dese games, see, real state-of-da-art-like.idea before you present this at the big board meeting, honey!! Breakfast's on the counter. Kisses, Walter.) Y'got one button t'punch, an' one button t'jump, even though he can't really jump cuz, shit, dat's one of his powas. But get dis, Boss: If ya pick up one of dese little green ball tings, y'can shoot out fuckin' slime balls! Of course most of da baddies are either immune t'dat shit o' all stooped ova' like, so ya can't, y'know, actually hit 'em, but kids like a challenge t'day so who gives a fuck? HaHA!

What, how many levels should dere be in all? Fuck, I dunno, Boss; ya tink anyone's actually gonna finish dis ting?

Graphics: Graffix? Is dat like, drawin' o'someshit? Lemme tell ya, my little girl drew da sweetest ting da otha day. It was a picture o'me an' Sadie -dat's my secretary- standin' on a big pile of-- Oh, f'da game! Shit, I dunno;

Yeah, dat's our villain. No, not da green guy. No, not da fish. Down dere, see it? In da lowa' right-hand corna'? Lookit dat terrifyin' son of a bitch. put it on dat Nintenno machine o' whateva da fuck it is. I don't tink y'gotta worry bout dem graphics too much, cuz dey''ll, eh, dey'll take care o' it. Dat Nintenno been around fer awhile. Eh? We've gotta tell 'em sometin'? Shit, well, make everytin' real dark an' spooky-like. Everytin', y'know, so it all blends togetha? It kin be like a fuckin' cloud ova da kids' little minds an' shit, so dey see our guy lurchin' along afta their heads hit da pillow. But seriously, my kid's drawin' of me an' Trisha -was fuckin' adorable, s'on da fridge.

Enemies: Hell Boss, I got ideas out my tight little ass for dis! Da first level's da swamp, see -cuz he's a swamp ting- so clearly we're gonna hafta go wit' robots. An' what about knives dat just fly outta nowheres fer no particula reason, keep dem kiddies on edge! Fuck yeah, GHOST KNIVES. Speakin' of ghosts, lata' on we should have some kinda spooky level, where we got scary tings like skulls dat pop eyeballs, an' darkies. But cuz hey, we don't wanna make it too scary or nothin', so why don't we put in some kinda fartin' snake?

But what really sells dis shit is I'm gonna make it edjacational, keep da broads happy! Like we'll have some kinda pterodactyl bullshit where ya hafta fuckin' memorize their movements t'have a prayer of dodgin' 'em. Oh! An' our


Fun: Is it fun? Is it FUN?!! Baby, it's only as much fun as takin' a teen momma's Wellfare check! Y'play as dis retard scientist who's fuckin' ugly an' can't move fast, his powas're completely useless because he can only shoot a few slimeballs atta time an' da screen is swarmin' wit' baddies, an' dere's a shitload of stuff ta hop around even though ya can't fuckin' jump. On top of dat, da colors look shitty, y'don't get enough health t'survive all da beatins ya take from bein' unable ta dodge, an' da levels last for-fuckin'-eva but just repeat ova an' ova again. Boss, what's not t'love? We're gonna be millionaires!