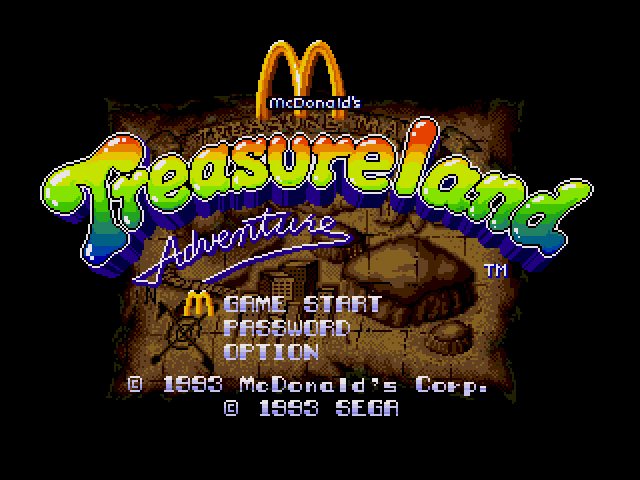 At a Glance: This week, Raptor Red is reporting from sunny Virginia, where she is enjoying such exotic activities as tricorner hats, being eyed hungrily by vultures, and referring to herself in the third person! Anyway, because vacations are technically for having a grand time, I thought I would write about a game that doesn't suck. Much. Wait, at all? McDonald's Treasureland Adventure makes me feel special, much like this happy gentleman. Oh God, what's happening to me? Suddenly I want my mommy... 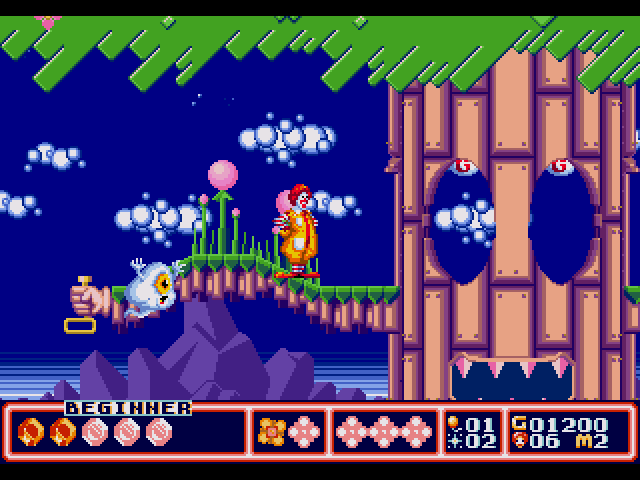 How happy!Graphics: I was not expecting a lot from a game based on a deadly fast food franchise, but immediately on starting Treasureland, I was shocked by the quality. While clearly borrowed from Sonic the Hedgehog in places, the graphics are as they should be in a game aimed atmanipulatingentertaining children: colorful, vibrant, and cheerful. The details in levels are very well-designed, and all of the animation is superb. Yet, sometimes, it seems like -I don't know- such a creepy game...

Gameplay: It's OK-- No, excellent. It takes the simple concept of platformers and turns it into something unique. Ronald has three skills: C to jump, B to attack with magic dust, and A to latch onto objects with his stylish scaf, which leads to d-dizzying fun in later levels that leaves me... strangely excited. There are about a zillion collectibles which you can either find or purchase with the game's mysterious currency. Some are quite useful -if you have balloons in your inventory, for example, they will save you from a splatty death should you happen to fall- and some I never figured out. But does it matter? Does anything really matter?

Ahahaa... Er, p-platformers usually consist of going from Point A to Point B while occasionally fighting nasty bosses, but Treasureland manages to spice it up a bit. There are levels that fall from the sky, sumo wrestlers that crush the earth, platforms that rotate around a conveyor belt which absolutely will not grind you into 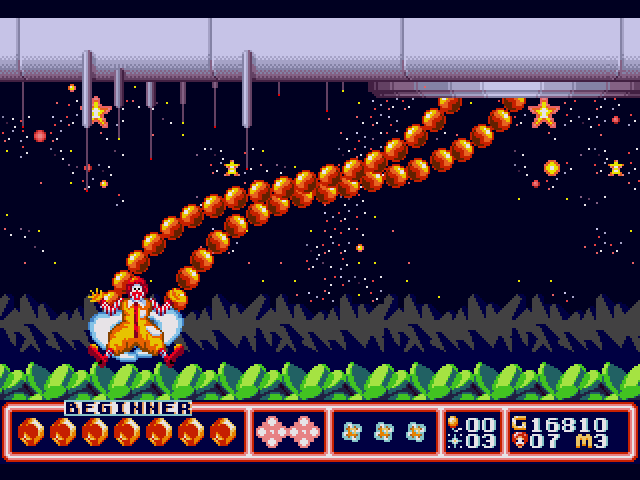 They're reaching into me, gripping my goddamn mind! seductively delectable bits, and more. Three difficulty levels means the game rarely becomes too easy or too hard. I mean, the final levels are a wee bit tricky, but what is the end of a game for if not eliciting rapturously anguished cries? A hee-a hee-a hee. Mother.. Shit, Mother, I want a hamburger. M-M-Mother, don't k-k-keep me from the arches...

Enemies: They are precious! I mean... good! The b-best part of a wondrous game, r-r-right Mother? Eheheheh... Rather than having creatures that run into you, there are all kinds of cutesy... beasts... Snails hide in their shiny shells 'til you turn your naughty little backs! Happy men with honky noses that throw b-b-boxes of love from the sky! Pretty kitties that are stuck inside little traps, scratching and clawing like we all do at each other. The bosses can only be poked when they're eating my tasty tasty lifebloods, which makes me realize the pain of this FUCKING UNFAIR world you brought me into, Mother!! But my new friend Treasureland even keeps me safe from boring projectiles, cuz the only enemies who use them do it in a cool, neato way! What fun!

Story: My daughter says -- fuck-- I-- Ronald finds a piece of a treasure map, and sets out to find the 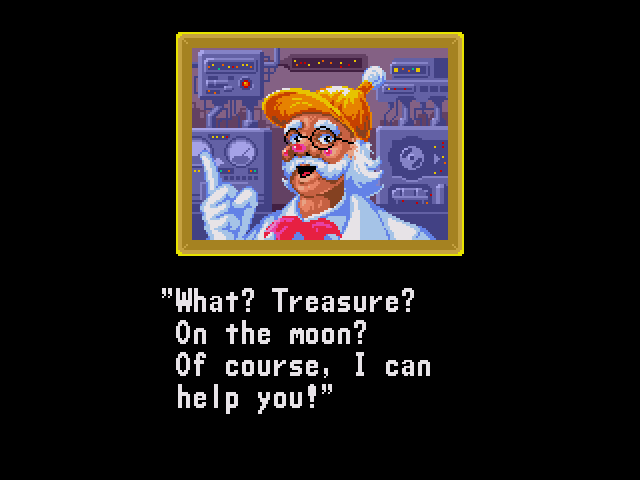 THIS IS THE ONLY KIND OF DOCTOR WE NEED GET THE FUCK AWAY FROM USother pieces! Yet three terrible "bad guys" have stolen them, ever so wickedly! It's time for-- what's that, Mother? You don't like the story? You think it's all one giant subliminal ad? Why would you say that, you silly, stupid bitch? It CAN'T be; look at how much fun this game is! It makes my insides sing! What? You think what makes it terrifying is that it's subtle enough for kids to love it, but grown-ups can see it's an elaborate, extremely well-done advertisement? Well I'm an grown-up, Mother, and I'm not even capable of being fooled, NOT EVEN BY A BIG MAC!! SHUT UP, MOTHER!! SHUT UP SHUT UP SHUT UP!!

Hee-hee. Just kidding, Mommykins. I love you so much, my best friend, my vile cunt. Hahahaha-- Mother? Oh God, Mother, come back! Let me take care of you forever!

Fun: DELIGHTS. so it looks and sounds like sonic -it doesn't really PLAY like sonic, especially as I've made a hat from his little hedgepiggy genitals. it is spiky hahahaha. McDonald's happens to be my world, i am more than happy, it makes a perfect game! No matter childrens will play anything -it is so logical! because it is not for little babies, as mummy's empty 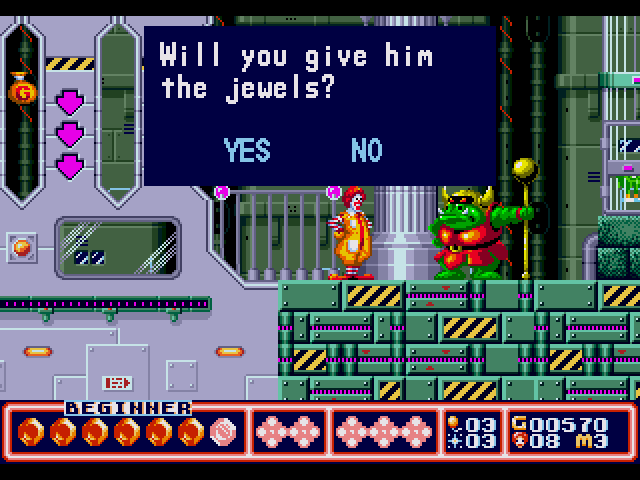 he became one with mother.skull tries to whisper to me. what is the magical part? secret, "special" things, just for meeee! funtime demons leap out of the mirrors instead of your reflection to be your super friends, little chicken-slut is going to have her holes plugged in slavery, perhaps by this trainmachine that looks like uncle's winky HA HA HA. would you like a kiss? I love a kiss! I love to smile, I smile always, even when the ground rushes up to take me to the death. So what is more fun? Nothing. I cannot forget :)

Defining moment: through a darkened tunnel i traverse. and then BuNNIeS come. they are pretty clad in pink like the tiniest virgins. they dance nice-nice. i love you, bunnies. i will hop across your pretty little heads.