The Mr. Bill Show, submitted by benxor. I've been a big proponent of hypnotism and the life-changing effects it can have ever since I worked with a hypnotist over a year ago. Hypnotism isn't for everybody, but I truly believe that if you allow yourself to be hypnotized by a skilled and able professional, the results can be astounding. And if you allow yourself to be hypnotized by Mr. Bill, the particular results that will astound you will be just how much of a crazy sleaze this guy is. In fact, you can skip the hypnotism part and just scope out his website to figure out that little gem of information. Mr. Bill is a hypnotist with three specialties. The first two appear to be designing incredibly obnoxious and visually painful websites and capitalizing every single word in a sentence. His third specialty is hypnotizing short, ugly women for the amusement of the home viewing public. 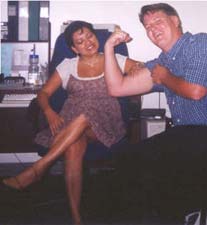 He wrote it, not me. Mr. Bill has over sixty videos for sale, almost all of which show him hypnotizing short, ugly women into thinking that their shoes are itchy. Now, what do we call it when a man sells videos over the internet of a certain type of woman doing a specific action over and over again? That's right, a fetish. Mr. Bill clearly has a thing for feet. Not only does he make these women think they have itchy shoes, getting them to take them off, but he inevitably then touches their feet, or watches while someone else does it. And whenever he touches their feet, he hypnotizes them into acting out an orgasm. If you honestly think these videos aren't selling solely to horny, desperate men with foot fetishes, submission fetishes, or both, then you need to spend more time familiarizing yourself with the denizens of the internet. The only real exception to the standard formula of Mr. Bill's videos is the one he has of Gena Lee Nolin. No, he doesn't hypnotize Gena Lee Nolin. He just sort of stands near her toward the end of the video. But it looks better to have a celebrity's name on his list of videos, so there you go. So he makes ugly websites, he capitalizes every word, and he hypnotizes short, ugly women into having itchy feet. But does he do anything else? He's glad you asked? I'm not, though. I have other things to do with my time than answer your questions.

Also Mr. Bill Will Bring You Information on How The Media Hypnotizes You. For Example, When Tragedy Strikes, The News People Are Right There with Cameras in your face & As soon ssy( Bla Bla Bla )for 5 seconds. The TV Station Goes to commercial for Coffee. Well America Your Tragedy Story Just Sold Coffee And Whatever Other Commercials Followed IN That Particular Break.. So When Mr. Bill Hypnotizes An Attractive Lady For His Reality Show. Don't Be Calling Mr. Bill To Harass Him, Because You Think You Know The Rules. If The So Called Master Minds Can Create A Show Called Queer Eye For Straight GUY. Then Mr. Bill Can Sure In Hell Hypnotize Sexy Babes, Are You With Me World !

Speaking for the world at large, no, no we're not. Sorry, Mr. Bill.