I write these words with no firm belief that they shall ever be read by another living soul. In this most desperate moment, I turn to my pen, in the hopes I might record some history of the travesty that happened here.

My name is Banned Frank, and I am in hiding.

Once, I was Chief Teddyologist for all of Santa's workshop. In those days--those sweet, careless days of yore--I spent my days gaily pinning button noses and plastic eyes to my furry creations. Each teddy bear was a work of art, a veritable paragon of Elvish mastery. And not only Teddy Bears. My buddy Roger could make a mean rocking horse, and Stacy down the hall was great with adult novelties. Now, us elves are pure, sexless creatures, composed of laughter and goodwill, so I can't personally speak to the quality of her pet project, Santa's Sex Toys. But I remember awakening one night to the distinctive sound of balls slapping ass and Mrs. Claus screaming, "Milk and cookies! Goddammit, give me your SWEET MILK AND WARM, FUDGEY, SUCCULENT COOKIES." I may be an elf, but something tells me that dry old broad wasn't aching for anything Nestle makes, unless they're introducing a new line of treats called "Screech Sweets".

One year, Santa heard about this new place that needed toys. See, the old duff wanted to make sure he didn't miss any kids who might need presents. All he needed to know was that there might be starry-eyed children in this virtual world, and off he went. 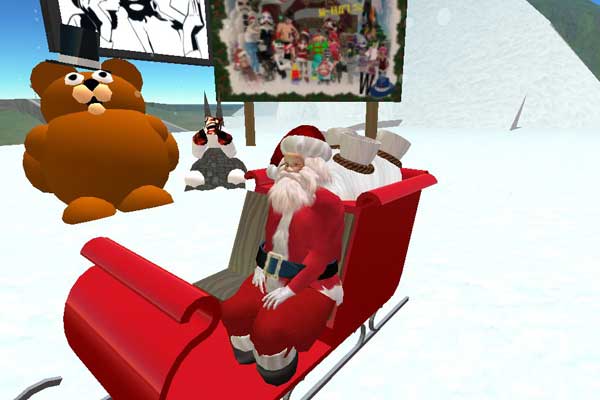 The boss had always made it a point to never leave just before the holiday. He knew we needed his help in the final crunch. Plus, something about this virtual world just didn't seem right to me.

If only I'd known then the horror that was to come. The invasion. The death camps. The way they crushed our lives like an angry child trampels a rival's snow fort. And now, with the spectre of death looming, my unique knowledge of this trying time compels me to record our errors so that others might not fall prey to such misdeeds. What follows is pieced together, from my knowledge and from the video record from Santa's sleigh. I pray that I may finish this epistle before the executioners arrive. Glittery pink pen, don't fail me now.