Tuesday, Aug 27, 2002 by Rich "Lowtax" Kyanka
State Og returns once again to give you the "inside skinny" (that's hip jargon for the kids) on some of the most "hip" (that's inside skinny jargon for the kids) products scheduled for release! If you're not already dead, you're going to wish you were because these things will kill you with excitement!

It'll Take More Than a Single American Government to Shut Us Down!

Howdee hay and daily ho to you fine folks on this beautiful Wednesday, August 28th! State Og is once again back to serve you the hottest (non heat-related) and most hot (heat-related) products since 1852! After numerous failed attempts at shutting down our popular and consumer-oriented product divisions, the United States government has finally admitted defeat and we're back on the fast track to helping you, the consumer, consume our hottest (perhaps heat-related) and most hot (definitely heat-related) products! That's right, we've once again bested the American government in their own court of law, proving that one man with a dream and a multi-billion dollar legal team composed of Harvard graduates and mindless titanium attack drones, cannot be stopped once he puts his mind and army of cyborg ants to the challenge! Hang in there and one day you too will have your chance to shine in the spotlight, preferably not the one that picks out people attempting to escape from prison.

Let's take a look at our fall lineup of exciting and award-winning products which will find a way into your hearts and minds, preferably by burrowing there.

Tired of taking boring cross country trips with your screeching kids, nagging wife, and outrageous gas bills? Well if you haven't already purchased our patented "Family Suffocation Machine" through the State Og Mail-order Catalog (now legal in three states!), try filling your tank with our newest environmentally safe product, Gas-O-Lean! With 50% fewer calories than normal unleaded gasoline (or, as the British fucktraps call it, "Petrol"), your vehicle will lose up to 15 pounds a week on this fat-free gasoline substitute!

Gas-O-Lean uses our special "Attack Atoms" to go after and actively pursue the parts of your vehicle which don't really seem to do anything except weigh it down and lower its gas mileage. In two or three weeks, you'll be cruising along faster and more efficiently than ever before thanks to Gas-O-Lean causing various "unimportant" parts of your car to shrivel and drop off, such as the pointless back windshield, silly distributor cap, laughable odometer, and pointless radiator fan motor! Shave off pounds the State Og way*!

* NOTE: Do NOT attempt to inhale fumes from Gas-O-Lean. Under no circumstances should you come into physical contact with Gas-O-Lean. Do not look at Gas-O-Lean without the use of protective eyewear. Vehicles exposed to Gas-O-Lean may exhibit signs of vampirism.

It's no mystery that stress causes millions of Americans to die every day from stress-related diseases such as AIDS, cancer, and Exploding Man Syndrome. Why put your own health at risk when you can relax in the new State Og HammoCannon?

This faithful replica of a 20-Pounder Parrott cast-iron cannon contains a snug and comfortable hammock just waiting for you to rest your weary ass upon! The hammock, woven from a delicate blend of spider silk and Mothra fur, is attached to an actual cannonball used in the Civil War to make white people explode! Simply set the CannoTimer Fuse to however long you'd like to snooze and then when time is up, you'll be woken with the deafening blast of the HammoCannon launching you 2100 yards, hopefully in the general direction of wherever you plan on going when you want to die. Due to limited quantities (and slight legal ramifications) of the HammoCannon, nobody can ever actually purchase one through our award winning "Call Us And Pay For the Long Distance Charges Your Own Damn Self" hotline.

Put the "Funer" back into "Funeral"! 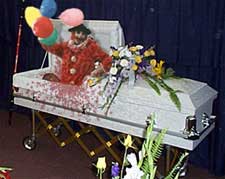 If you're like us, you undoubtedly get bored to tears during funerals for friends and family alike. The person's dead, for Christ's sake, why should we be forced to stand around and observe the fact that they're dead for up to two hours? Well this eternal question popped into State Og CFO Alexander Grizby's mind a few months ago, causing him to develop the new and exciting service "Clown In a Corpse," available ONLY through State Og!

"Clown In a Corpse" puts the "neral" into "funeral" by adding a comedic treat to any dead guy's boring eulogy or funeral. During a random time, usually when the widow or immediate family members of the deceased are standing over their dead loved one, Clown In a Corpse will spring forth from inside the deceased's ribcage, showering everybody with a colorful shower of confetti and internal organs! Imagine the look of surprise and joy that formerly bored funeral attendees will experience when their boring little depress-o-thon is spiced up with the zany antics of Chester Cavity the Clown! They'll be begging for more when he grabs the deceased's arms and legs and begins doing hilarious celebrity impersonations! And don't even get us started on his nonstop laugh parade that his "Acid In a Balloon" gag ensures! No seriously, don't get us started. We're not kidding about that, don't get us started.

State Og will be holding a charity fundraiser for children whose parents mysteriously disappeared at the spooky "State Og Haunted Radium Laboratory." Entertainers will include Jenny Barrow, the heroic survivor of last month's sulfur mine implosion whose unspeakable trauma now allows her the exciting opportunity to see how someone will die by simply touching their hand! Find out how you're going to buy the farm thanks to the charismatic young Barrow! Will it be when the banquet hall collapses because of all the concrete we're storing on the second floor? Did that refrigeration failure and subsequent heat wave and flea epidemic contaminate tonight's 500 dollar a plate steak and eggs? Only Jenny knows the answers to these questions!

You've Got It Made With "Maid In a Cube!"

Filthy and irresponsible homeowners across the world rejoice! State Og has listened to your wants and needs (through our State Og Brain Silo) and we've created what experts have called "definitely... a... (good) product that is... (not)... highly dangerous and should... be purchased at all costs!" Our brand new and intensely exciting "Maid In a Cube" will lighten up your load by performing whatever cumbersome and annoying household chores you hate to do! She's at your service night and day, 24 hours, seven days a week, and all for the low, low price of $99.95! How is this possible? Simple: we've trapped a professional maid (filthy Mexican child) inside a 4x4x4 foot metal cube and we'll ship it to your door within weeks of ordering! Say goodbye to the thankless chores of mopping the floor and washing the plates and say hello to Maid In a Cube*!

* NOTE: "Maid In a Cube" can only accomplish chores inside its cube or through the three inch tall air hole aperture located on the top front side of the cube (or bottom back side if you don't like your version of "Maid In a Cube").

Well that's all for this month folks, but we promised to be back next month with yet another exciting State Og Product And / Or Service Update, one which might actually contain products and / or services that will not get you arrested for owning! Until then, may the ghost of former State Og Advertising Executive Linda Yorba haunt you and break plates over you and your family members' heads!