We're a little bummed around the office this week. You see, State Og was hired by Microsoft to design an exciting state-of-the-art power plug for the Xbox. We believe that state of the art is synonymous with "fire-causing" and that the plug has enjoyed great success, but apparently Microsoft is stuck in a 20th century mindset. Special thanks this week go to: Tom "Smoking Dragon" Clancy, Don "Motorcycle" Jolly, and John "Clitch" Macbean. 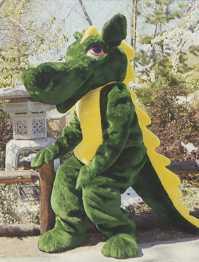 In a joint deal between StateOg, Disney World, and RJ Reynolds tobacco company a character based on the Smoking Dragon modern art series will be added to the Magic Kingdom in Orlando, Florida. The character is planned to appear in Mickey's Toontown Fair; the part of the Magic Kingdom geared towards younger kids. He will also take part in the daily parade and toss out free cigarettes (intended for adult use only).

To give the character a “lovable trouble maker” side we hire only the finest convicted felons out on parole. Plus this will help keep costs down. With any luck we hope the character will eventually become the next Mickey Mouse or Little Mermaid!

We hope this is a start between a long and profitable relationship between the three companies!

State Og, in compliance with new regulations put in place over our location in the Cave Of Many Tongues , CA, must now inform all employees of any sex offenders we have working in the office. For a normal company, this is a stressful and often embarrassing task. But we are saddened to say that the situation is worse for us, because certain management decisions may have resulted in certain employees being commanded by hypnotism to commit sex crimes and then escape without knowledge of the assaults that they committed. We're sorry, and we assure you that those responsible thought it was very funny at the time.

Jack Bremer, Marketing – Was forced to molest upwards of three hundred children, including his own.

Julie Stern, Accounting – Was forced to mate with a Sasquatch. Although this is technically bestiality, we commend Julie on her dedication to the continuance of the mighty Yeti line.

Lee Fellows – Was forced to have sex with Marvin Peel's wife.

Marvin Peel – Was forced to staple his penis to Christian Slater.

Horace Boyle – For more information on the location of your penis, and for instructional bomb-defusing and rudimentary Chinese courses, see the HR department.

Thanks so much for your patience! And sorry about the mind control. We promise we won't do it again, unless we think it would be funny.

On a lighter note, Congratulations to Marvin Peel, who has just found out that his wife his pregnant. We hope that his child will grow into a valuable member of the State Og team!

As per CEO-X's request, I have compiled a brief history of the project and detailed what information I have obtained from eye-witness accounts of the incident in question. Please feel free to reply with any questions you may have, or any bitchin' cocktail recipes you think I'd like.

The MonkeyBot 3000: A Historical Summary

During the Season of the Gallopping Muskrats, Year of the Terrible Sun(sometime last March), our privately funded think tank, HCON was tasked with creating a new concept for our Executive Gadget/Waste of Shareholders' Money line of products. Sales of the Remote Cubicle Drone Zapper™ were down the previous quarter, due to mostly erroneous rumors of FCC and Civil Rights violations, so the line was in need of a new flagship product.

HCON requested and received a large R&D budget. Incidentally this budget approval led to a necessary reduction in employee medical coverage. The new benefits have been working well. The most successful being our having infirmed workers watch a short video of Dr. Dre saying "You be a'ight!". Sadly, due to other shortfalls in the company budget, we were forced to cut that back to the fat Dr. Dre from "Yo! MTV Raps". Back to the subject at hand, HCON set to work on the concept phase.

The concept of a personal robotic monkey companion was the result of a large, pointless, and extremely nerdy argument that had been raging within the walls of HCON's fortress for months. Apparently the descendant order of 4 select creatures is a subject to be debated upon for hours on end. After several combinations of these 4 entities, the monkey/robot hybrid was decided upon by a double-elimination mock lightsaber duel tournament. Numerous reports attribute victory to an intern named Ghyslain. Thus the MonkeyBot concept was born.