The Annual State Og Company Picnic has been postponed due to the swarm of eight foot tall radioactive red ants which teleported onto the picnic site from their homeworld, The Planet Of Eight Foot Tall Radioactive Red Ants. I know, I know. I didn't name the place, they did. The festivities had barely begun when the interlopers arrived, biting all in their path and clicking in delight as their victims swelled to freakish balloon sized caricatures of their former selves. Our hearts go out to all those who left behind loved ones or potato salad as they fled in terror. Special thanks this week go to: Don "Motorcycle" Jolly, Tom "Smoking Dragon" Clancy, and Matt "Coco13" Rock.

It is no secret that the world's oil supply will be exhausted within 70 years. With current technology, the effects of such a shortage would be disastrous. Cars would sit unused. Gas stations would rot, abandoned. Steven Segal would be separated from his common law wife, the exploding building.

Clearly, action must be taken. The various governments of the world have proposed their own solutions – biological substitutes, hybrid energy forms and other crackpot schemes have crawled from the desperate maws of these false prophets. For there is only one true cure. And we have found it. It is in the spirit of mutual good will and universal fortune that State Og presents : the energy of the future.

Think about it. There are reams of children unclaimed by parents or separated from their originators by gunshot, plane crash etc., and children are full of energy. We have watched them running in parks and playgrounds – their thighs milky, like supple bone. Think of the power coursing through those little fingers. Those taught faces. Think of that squeal of delight powering your car. Think of that bright smile lighting up your toaster.

Harnessing the energy of orphans is a simple process, pioneered by an elite cadre of State Og High Acolytes. In layman's terms, it is essentially a perverse rending by which all of the pure energy in an orphan's tiny form is extracted as one would extract dishwater from a sponge. The energy is then funneled into a glowing purple cube, and somehow used to power things.

We'll work that part out later.

The point is that orphans are completely renewable power source. If we run low, we can just start killing parents and stop when we meet quota. Most State Og branches have converted to Orphan power, replenishing their energy stocks in this fashion. Except for some whiny liberals, the whole thing has been a tremendous success.

Onward, friends! To the future!

Tired of waiting for the National Hockey League to work out its differences? Now you don't have to because State Og has started its very own professional hockey-esque league! Some new and exciting rules promise to make this way better than that boring figure skating crap they used to play: 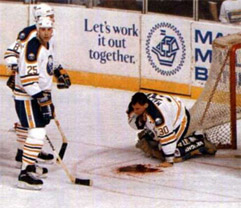 Guess you won't be high sticking anymore, will you jackass?- Ties will be settled with all out brawls

- Free beer and meth nights for the fans

- Fans are encouraged to throw projectiles at the players, knock one out and you get a free t-shirt!

- Zambonies clear the ice during play

We also hope to avoid the labor related problems plaguing the NHL by banning labor unions altogether. In fact, all players play for free or we will denote the explosive tamper-proof collars permanently attached to their necks. These could also be used to replace penalties as John DeFavo demonstrates during a recent trial game between the North Carolina Tarbabies and the Cleveland Drunken Injuns.

The new league, called the XtReMeX Hockey League, will begin play this fall in most major cities.

Holy shit, you are in for some bad fucking news. I just found out that Larry, the official State Og Centaur, is on his way to kick your fucking ass. And he can, man. Those hooves can stomp through steel. It's not like being a centaur is enough, even. He's a mutated centaur, another damned 2 arms sticking out of his flank and he can shoot lasers out of his fucking eyeballs like that X-man, but without the glasses. I mean, I'd be worried if a normal centaur were after me, but you're in some deep shit here.

I'm not sure what the hell his problem is. All of a sudden, Larry storms into my oceanic cubicle, demanding to see the phone book. "Which one?" "All them fuckin yellow pages," and then Larry just starts going berserk, searching for who knows what. He's using those damned laser eyes to keep his place, keeps burning through the book. Suddenly, he throws down the phone book, and gallops off. I look, and bam. The last name he saw was yours. Holy shit, am I sorry. I'd be settling my worldy orders now, because when Larry's after you, you can't fucking get away. I saw him in the parking lot with one of those giant medieval axes, like the executioners would use. I don't even know where he found it. Why the hell would he need it anyway? He's got those laser eyes. Larry, as good a baker he is, is a fucking sadistic bastard I tell ya.

I don't even know why we'd need an official State Og Mascot, let alone a mutated centaur. Like, four people said we could use it for our company picnic on the moon each year. "Kids will love riding him." they said. The next thing, Larry shows up with a State Og banner around his trunk and nobody gives a fuck. I really didn't think to highly of him, and the rumors didn't help much. I've heard from two different sources that Larry's spent time in prison for dealing drugs. Not like, cornerstore weed supplier, but fuckin importing cocaine. Cocaine! Imagine how fucking insane he must be, cause it's not like a witness will mis-ID him. He's a centaur that'll get shit done, extra arms or not.