From the talented mind of our Chief of Cliched Japanese Biology, Dr. Christopher "Nishimura" McLeod, comes the next big thing in life saving techniques. After a four-year stint locked in the State Og biodome and skate park, Dr. McLeod finally figured out how to work the door latch and emerged with an astounding new product! Yes, Christopher's inaccurately named Rape Cats are here and ready to help the world!

Most of the time the average Rape Cat wanders the streets, looking like an ordinary six foot long mass of sleek muscle and claws that has a taste for discarded medical waste. However, if trouble should arise in the form of invading aliens, crazy mailmen, flying nuns with hidden bombs up their knickers, swamp creatures with disproportionate sex organs, joggers wearing Adidas knockoffs, or Something Awful readers, the Rape Cats will spring into ferocious action! In a few seconds the Cats' genetic engineering and extensive cybernetic implants and brutal psychological scarring will transform them into a massive armored monster equipped with functional rocket launchers and possibly tank treads! These fully armed attack things will then use every resource at their disposal to end the threat, even if it means knocking down most of the buildings in the area. If the menace should prove too large or too powerful for a single Rape Cat to handle, they will pile together to form a massive and laws-of-nature-breaking orgy, which may or may not help resolve the situation, but will end up being a hell of a show!

We hope that a horrible incident involving space lasers or tiny cars full of giant nuclear beetles occurs soon so that the whole world will see just how effective our Rape Cats are at handling those kinds of situations. Remember: At State Og, We'll Show You All!

State Og has been in need of a new public face for quite a while now. We often have to respond to the public and the media, and need people to represent the views of State Og every time we kill off an endangered species, sacrifice virgins to volcanoes, and during our monthly Highway Gopher Battles.

We interviewed hundreds of people trying to find the one person who the public would best associate with. After interviewing / executing 133 people, we found a gem of a woman with the public interest in mind and decided that she alone would represent State Og until we get sick of her and trade her for some Yu-Gi-Oh cards.

To best familiarize you with her, we have posted her interview in its entirety.

State Og: "What is your name?"

Potential Rep: "I'm in a special group called the SEFW. That stands for the Scorched Earth Fetish Workshop. It's based on the Russian World War 2 tactic of scorched Earth. What we do is find a parking lot with a few cars parked over night, and we then proceed to have intercourse in the car. Once we have climaxed, we get out of the car and set it ablaze. Then we move onto the next car and repeat the process."
"It's not just for adults though, minors can also participate as well. Anybody under the age of 18 can take part by playing the role of the Germans. The Germans' role is to translate poems from English to German and then recite them before each person in a car has climaxed. If the Germans do not translate in time then we go onto the next car as normal, and the Germans are given a new poem to translate. If the Germans do translate the poem, then we still go onto a new car as normal, and the Germans are still given a new poem to translate."

State Og: "You still haven't given me your name. Oh, and you're hired."

At this point the interviewer decided that maybe if you had to put up with this insane woman every time you demanded answers from us, you'd quickly realize that it is easier to let us be than to have to deal with this woman. (Who has still failed to provide us with a name; We'll call her Gail) So far, she has represented us at two press conferences. During one she tried to recruit members of the press for her fetish, and for the other she explained how a bat anus is superior to ours. So, all that would question us: Ask away. You're only hurting yourself.

We at State Og would like to take a few moments of your precious time to introduce you to some of our fine agents. One such member of our corporate family is Jason “Vengeance Otter” Johnson. Since so much of his fieldwork is undercover and shrouded in secrecy, I had very limited access to the background information on agent Vengeance Otter, but what information I could share is very interesting and I hope it will make you personally feel closer to our State Og team.

The first thing people usually ask about Mr. Johnson is how he got the handle “Vengeance Otter.” Is he some kind of dangerous mutant otter? Is the name based on his job for State Og, such as membership in our Special Marine Forces or offshore demolition teams? No, neither of these are true, beloved customer and simpleton. First off, I can assure you that Vengeance Otter is very much human, though I have never actually seen him. In fact, I can't describe Agent Vengeance Otter's appearance at all. Unfortunately, it seems no pictures of him are available, not because of his undercover work or because he's some kind of deformed freak, but because when he sees someone with a camera, he tends to go on what's been described as a "scalping spree." Regardless, the nickname “Vengeance Otter” was given to him many years before he started working for State Og - after he defeated and slew his first foe in glorious battle. Though details aren’t clear, it seams the whole combative incident somehow involved at least one or more Otter Pop brand popsicles, hence his moniker. Although we are not sure whether an argument over the Otter Pops was the cause of the conflict or if they were the actual murder weapons, we do know the “incident” almost got little Jason kicked out of kindergarten. 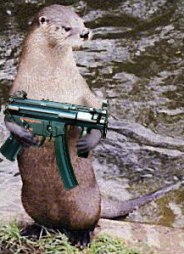 What the Hell? I just found this picture and I don't know what to make of it. As I've said before, I'm positive Vengeance Otter is human, so I'm sure this has nothing to do with him. But the more I think about it, this would explain why the arsenal at State Og Headquarters has so many weapons specially modified to be fired by hands with small webbed fingers.After many heated debates with representatives from the Food and Drug Administration and drunken shootouts with the Bureau of Alcohol Tobacco and Firearms, Vengeance Otter decided the time for selfless philanthropy was over. Fortunately, it was at this time State Og hired him and he has proven to be one of our most well-rounded and flexible agents, capable of working both in the lab and out on the field. While you might be able to find a scientist with more degrees or a fighter with more combat prowess, we can without a doubt assure you that you won’t find a scientist more brutal and capable of dishing out death nor will you find a more scholarly thug than agent Vengeance Otter.

To conclude our profile, we sought out Vengeance Otter's remaining parent, Dr. Phil Johnson for some insightful closing words. The proud father shared the following with us, "For the last time, I'm not that things 'father!' My partner and I genetically engineered and grew it in a vat. We were trying to make something good and beneficial for society. A new highly-intelligent man-made creature that would help serve, teach and protect the poor and powerless. Instead, we got a wicked monstrosity that spent its first hour of life eating all the skin off my research partner as he screamed for mercy. Since I couldn't stop his violent rampages, I donated 'Jason' (who was originally known only as just Subject 1142) to an orphanage and hoped they could somehow deal with him. I told them the reason he was so hairy was because he accidentally overdosed after getting into my Monixidil and Propecia. They bought the story and I turned him over to them and until now I never looked back." Filled with fatherly pride, Dr. Johnson eyes began to tear up, and he sobbed, "Christ, he ate all of Tom's goddamn skin!"

At State Og we like to think we possess a great deal of patience -much more than our abusive fathers-, however we've finally gotten tired of waiting for America to do something about an obvious problem. We will no longer stand by idly while potted plants nationwide are neglected, suffering from dehydration, insects, and disease! That is why you must buy our brand new Deluxe Plant Pottotron SILVER immediately!

Once your household plant is placed in a Deluxe Plant Pottotron SILVER you can rest assured that it is in good, unusually high tech hands. This latest Og offering comes with all the bells and whistles our customers expect; stainless steel construction, LCD readouts, and the ability to sing show tunes from 80 of the world's greatest musicals. However, the real coup de grace comes from what this device will do for your plants.

Deep inside the Deluxe Plant Pottotron SILVER, much deeper than the fully functional chemical weapons lab and slightly deeper than the pulsing human heart, is a robotic brain with a single purpose: protect the plant at all costs. You'll never need worry about upkeep again, as the planter will do it for you! It would be needlessly cruel to give the Deluxe Plant Pottotron SILVER the ability to care and be unable to do anything about it, much like our line of sentient diapers that hate being shitted in, so we've given the Pottotron all the tools it will ever need! Slender sharpened tentacles allow the Pottotron to stab worrying insects right out of the air with creepy accuracy, depositing the carcass in the soil to decompose. Those little arms also allow it to walk to better sunlight, be it across the room, out the door, through traffic or onto a boat to Korea, where the sun always shines and the labor is almost criminally cheap! Water is never a problem for a plant kept in a Deluxe Plant Pottotron SILVER, as a feeding tube is always questing for a source of water, and with its attached drill bit it WILL find some, whether it be in a refreshing glass of iced tea, in your bathtub, in the plumbing behind the drywall, or two inches into your forehead! That plant is gonna eat like a king…. that is also a plant!

Pick up your own Deluxe Plant Pottotron SILVER today and take the stress out of owning plants!

Note: The Deluxe Plant Pottotron SILVER must be fed live snakes twice daily or it will snap and go on an indiscriminate killing spree, possibly rising to a position of power within a small developing nation. At least that's what ours did. Wily little rascal!