Sorry, But Batman: Arkham Asylum Is NOT Realistic

Everyone is raving about Batman: Arkham Asylum like it's the greatest game of all time or something. It's good, sure, but it falls way short of its ultimate goal of realism. 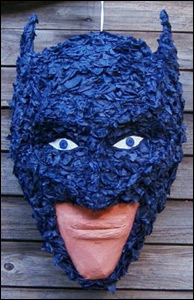 Okay, first of all when a dude is about to attack Batman, a visual cue pops up in the form of Spidey-Sense wavey lines around the attacker's head. Once countered, Batman can knock the enemy out after a series of brutal combos. In real life, I never get any sort of a warning. Furthermore, it only takes one punch to render me unconscious. Way to do your basic research, developers.

When a bad guy in the game is beaten senseless, bats fly out of his ragdoll body and give you experience points. Uh, on what alternate Earth would that happen? The moon? It would make sense for the bats to fly out of Batman when he collapses since he's the only bat-related character in the game, but for everyone else there should be little human babies spewing forth.

Speaking of bad guys, have you seen Killer Croc? He's depicted as a ten foot tall monstrosity. Laughable. In real life, it would cost far too much for any government-funded institution to feed someone of that size.

Also, if Croc barely fits inside the elevator he emerges from when you first encounter him, how does the asylum move him around during normal operation hours? It would be impossible to fit him AND a guard in an elevator. I refuse to believe that they escort Croc through a series of oversized stairwells.

Then there's Detective Mode. Hoo boy. In order to see people up to a hundred yards away as skeletons, a device would have to transmit insane levels of radiation. In real life, this would obviously have long-term effects on Batman, granting him some form of superpower or at least a handful of high-grade psychic abilities.

Arkham Asylum is chock full of indoor gargoyles. When Batman perches atop one of these ghastly fixtures, he remains cloaked from any bad guys that happen to be lurking below. RIDICULOUS. Any indoor gargoyle that has passed county inspection must have a motion-activated safety light for casual grappling, which would totally give Batman away.

The most glaring problem with Batman: Arkham Asylum, however, makes all of these complaints seem almost silly.

There is simply no way that Batman would reveal himself to be the mastermind behind the asylum's takeover. It is completely out of character for him to work alongside the Joker for almost any reason, much less the procurement of Commissioner Gordon's "Buy three subs, get one free" card from Gotham Deli.

Up until that point, the game had made up for its flaws with a fun experience, but the ending took all the wind out of its sails. I didn't get the final cinematic, either, where Batman says "This isn't over, not by a long shot", and we see a dark corner of the bat cave with dozens of eggs wriggling, one cracking open to reveal a tiny hand with a Batglove reaching skyward.

Darkest Of Days
If you remember the cool World War I bits in Twelve Monkeys, you'll keep remembering them long after you've forgotten this. 3/10

Marvel: Ultimate Alliance 2
We simplified the parts that made the original UA great, but made up for it by letting you pay out the ass for DLC versions of all the characters you actually want to play. 6/10

Wet
As long as the game didn't explode into shards of horrible code that blinded you when you opened the case it would have exceeded my expectations, but Wet exceeded my expectations a little bit more by just being a below average third person shooter with some Grindhouse style and self-awareness layered on as an afterthought. 4/10

The Beatles: Rock Band
It's too early to know for sure, but when this month's sales numbers are in I suspect Harmonix will be redeemed for their controversial choice of passing on Chickenfoot: Rock Band. 8/10

Guitar Hero 5
Features just as many playable dead dudes as the newest Rock Band, but manages to do so in a much creepier fashion. 6/10

Need For Speed: Shift
I don't know how many gaming sites will run a byline that reads "Need For Speeds Shifts Into The Next Gear", but I do know they could write something better while waiting for a track to load. 7/10

Scribblenauts
So you write what you want and watch it come to life... hold on while I try "side-scrolling Mario game without control gimmicks on an HD Nintendo system". 8/10