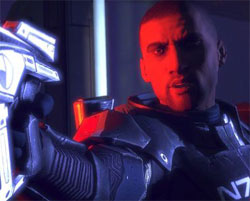 Who's Denis Dyack? Picture Derek Smart with delusions of grandeur, his seething hatred for vending machines redirected at the gaming press.

As the release of Too Human draws near, the outspoken president of Silicon Knights (a game studio, not the medievel jousting restaurant run by Hooters' management) has expressed concerns about how his totally awesome game will forever change the town in which it was developed.

Obviously, a man of such deep compassion has daydreamed about the global impact of his video game between shameful flamewars with 13 year-old message board users and hourly jerkoff sessions in front of a full-length mirror. Like Oppenheimer before him, Dyack realizes that his bomb will change the course of human history.

His concerns are numerous. These are but a few.

Strong Bad's Cool Game For Attractive People Part 1: Homestar Ruiner
At long last, the Garfield of the internet flash animation scene has a game that's almost good enough to rival Garfield: A Tale Of Two Kitties for the Nintendo DS. 5/10

Space Siege
A Diablo clone without loot is like a first person shooter without enemies or a Wii game without disappointment. 4/10

Too Human
He who makes earnest use of cliched Neitzsche quotes might take care lest he thereby become someone that takes themselves way too seriously. 6/10

Bionic Commando Rearmed
See, the "rearmed" in the title is clever because the main character shoots guns. 8/10

Madden NFL 09
How about we stop bothering to review these games until they feature jetpacks or athlete-versus-referee fighting minigames? 7/10

New International Track & Field
Clever timing, releasing a track & field game during the height of excitement over the biggest event of the summer, the Warped Tour. 7/10