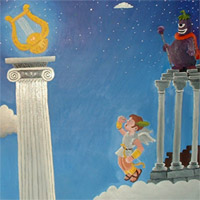 There shall come a time when each and every one of us will pass from this world to stand before Denis Dyack, who sits in judgment of all souls who play, develop, or write about video games. When he cracks open the Prima strategy guide of your time on Earth, the actions you have taken will determine whether you are granted entrance to video game heaven or doomed to an eternity with N-Gage ports of Superman 64 and Bad Day L.A.

While there are many lesser offenses which you should probably feel very guilty about, some acts are so heinous that they stand apart as the cardinal sins of gaming. If you have committed any of the following sins, confess your trespasses to a local GameStop employee or risk eternal punishment.

Team killing on a friendly fire-enabled Team Fortress 2 server after one of your teammates has said "seriously, stop" or "dude, come on".

Incorporating Rock Band into your sex life as part of a rock star + groupie fantasy scenario.

Unplugging a friend's controller just as he's about to clear a particularly difficult battle, then using the cord to strangle him to death.

In a hurry to clear some space in your World Of Warcraft character's inventory, accidentally selling your soul to the gun vendor in Orgrimmar.

Completing one of the Thief games without immediately playing through the game a second time using a mod that lets you put back everything you stole.

Purchasing a game when it comes out when you could easily pre-order the colletor's edition to get an extra DVD full of art that you'll never look at and an exclusive wallscroll, all packaged in a classy tin that could double as a WWII-era first aid kit.

Being proud of your Gamerscore.

Using any cheat code that requires the input of a finger into the vagina of a married woman.

Purposely deleting someone's save file to "make room" for your new game when there are already plenty of slots available. God damn it Gabrielle, do you have any idea how long it took me to breed that golden chocobo and get Knights Of The Round? You may have died in 2002, but I will never forgive you.

Returning to your Animal Crossing town long after you stopped playing, only to abandon your suicidal neighbors once again when you realize that the place has turned to a depressed ruin without you.

Choosing an Evil / Renegade / Dark Side / Pragmatic response in a Bioware RPG.

Turning off your console during a save while a message on the screen specifically asks you not to do so.

Type a four thousand word essay explaining how you ripped off a corporation in Eve Online for millions of isk, failing to tell the more important story of how you squandered the time and money your parents spent raising you.

Bad Company
Telling horrible jokes seems to be the only prerequisite for being recruited into Bad Company, which makes me a lock to become a 5-star general the day I enlist. 7/10

WALL-E
A WALL-E game about cleaning shit up is about as appealing as an E.T. game about falling into pits... oh no. 5/10

Hail To The Chimp
The game's humor is twice as good as all its other features, and the title is as funny as it gets. 4/10

Top Spin 3
Even the best tennis game I've ever played can't be forgiven for the sin of excluding Ana Ivanovic. 8/10

Nascar 09
TURN LEFT TURN LEFT did I make the TURN LEFT joke yet I am a professional game reviewer and I wouldn't be doing my job if I neglected to mention TURN LEFT haha this game's actually pretty good, but TURN LEFT! 7/10

Emergency Heroes
If science could somehow combine State Of Emergency with this turd, we could have Emergency Of Emergency, the world's first euthanasic video game. 1/10

Trauma Center: Under The Knife 2
Cut people open on the go in this game that tragically comes to us a hundred years too late to placate Jack The Ripper. 8/10