EXCLUSIVE E3 MEGATON REPORT: I Bought Rage and Got Rage With Sewers

This is the biggest story of E3, and you won't see it anywhere else.

Today I bought Rage for the PC. That's not the news. It's just something you need to know.

Look, it was on sale, and when I originally played Rage on a console the hologram dice-rolling minigame seemed rad. The point is, I bought Rage. Regular old Rage. At least, I thought I did. Then when I redeemed the code on Steam this is what I saw:

Did I accidentally get one over on someone? Is this windfall the result of an e-commerce fluke? Did I win some secret contest? A better man than myself could spend a lifetime chasing the answer to any one of these questions and die in the dust with empty hands outstretched. 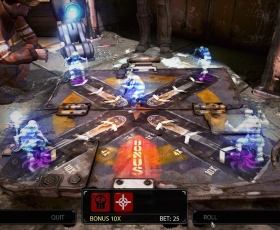 The simple fact is, I have Rage with Sewers. Dwelling on the divine purpose behind this fact would be a waste of time. Sewers cannot be undone.

As far as I have been able to gather (and I haven't installed the game, or performed even the most rudimentary search online) Sewers is at least one sewer, situated somewhere below the world of Rage. But that's just a literal description. In a broader, more philosophical sense, Sewers is a thing I got with Rage.

Rage, with Sewers. The implications are dizzying.

What is the nature of the Sewers? They could be dark and cramped, or a series of high-ceilinged chambers with enormous columns. They could be full of garbage and waist-high water, or suspiciously dry. They could be pitch black, or harshly illuminated by rays of golden sunlight filtering through mossy grates.

I wonder if there are enemies down there.

You've got to figure there are at least some rats. Maybe mutant rats. Beyond that, it's impossible to guess. Literally anything could be in Sewers.

This Sewers situation represents a profound divide. There's me, on one side, a person who owns Rage with Sewers. Then, across a vast gulch of trash and fire, a writhing mass of unfortunate shitheads cling to one another and look back at me longingly. They either own Rage without Sewers or don't have Rage at all. Now they find themselves on the losing side of history.

What have I done to deserve this? Everything. For the universe to deposit a gift like Rage with Sewers into my lap I can only assume I have done everything correctly.

Once again, Video Game Article (backed by the resources and legal council of Something Awful) has broken a story wide open before the languid, complacent games press. Those dumbasses have been left standing around with Amiibo in their mouths debating the sexual lives of Rabbids characters, making a living wage while I continue to toil in despair.