An Absurdly Biased Look at the Neo Geo Mini 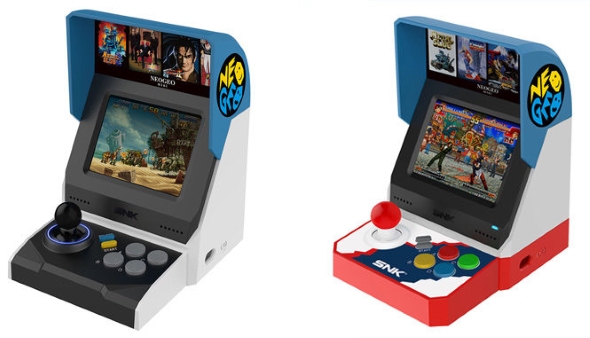 I've been a sucker for SNK since the first time I laid eyes on a Neo Geo MVS cabinet. The sprites in King of the Monsters were so huge! The animation in Metal Slug was so detailed! The everything in Samurai Shodown 2 was so fantastic! It felt like these games had been teleported into my bowling alley's arcade from a distant planet far more advanced than our own.

For years I daydreamed about owning a Neo Geo of my own. Unfortunately the $600 console and $200 carts were slightly beyond my budget of zero dollars.

Now it's 2018 and a miniature Neo Geo with 40 arcade-perfect games can be picked up for around $100. All those years of agonized longing have paid off!

The Neo Geo Mini is tiny. How tiny? Here's a picture of the Earth, for comparison: 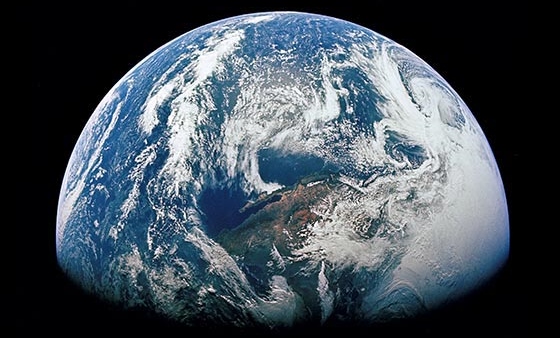 That should give you some sense of how small this system is.

Unlike miniature consoles which need external displays, the Neo Geo Mini is a full-on arcade cabinet with its own built-in screen. You plug it into a USB power source or an outlet, turn it on, and get your butt kicked (if you're me) in forty of the best arcade games ever made.

There's Metal Slug 1-5 and X. Samurai Shodown II, IV, and V. Both King of the Monsters. It even comes with Garou: Mark of the Wolves, which still has some of the most gorgeous background art and character animations to appear in any fighting game. Here's the full list of games on the International version of the Neo Geo Mini, which today's article is based on. There's also a Japanese unit I'm hoping to get my hands on with a slightly different selection of titles.

While you can hook the Mini up to an HDTV, the unit is at its most impressive when it recreates the feel of playing an actual arcade cabinet right on your desk. Once a game begins you forget the size of the hardware and find yourself sucked into the surprisingly effective arcade experience.

This is largely thanks to the screen, which is super sharp and bright. SNK's games are art-heavy and every pixel is exactly as crisp as you'd hope.

While the joystick doesn't have the satisfying click of a Neo Geo MVS, it is precise. It hasn't missed a single input in even the most heated fighting game matches. Then again, my strategy is to flail around wildly and hope for the best.

For two player games you can pick up a black or white Neo Geo Mini Pad. Modeled after the Neo Geo CD controller, these pads plug into either side of the Mini to control player one (left) or player two (right). They feel just as responsive as the system's controls. Unless you don't plug them in at all, in which case nothing happens when you press the buttons. I suggest plugging them in.

By now it's obvious that I kind of love this tiny thing. The only way it could be better is if it included Neo Turf Masters, the greatest golf game of all time.

Would I recommend the Neo Geo Mini? If you're a Neo Geo fan and you don't need a joystick that sounds like Samuel Jackson's character falling down the stairs in Unbreakable, absolutely. If you're not a Neo Geo fan... well, to be honest I can't even imagine what it would be like to be you. Do you even feel joy? 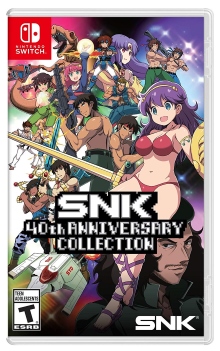 Here's a fun coincidence. As I was putting this update together the fine folks at NIS America sent me a copy of SNK 40th Anniversary Collection.

This classic game compilation for the Nintendo Switch focuses on SNK's pre-Neo Geo titles, many of which I was completely unaware of. Over the last few days I've been losing myself in this lovingly made tribute to a wholly unfamiliar corner of arcade history.

There are fourteen arcade titles (along with their NES ports where possible) included, with eleven more coming as free DLC over the coming weeks. The presentation is packed with options, from filters and border art to screen orientation. There's even a feature I've never seen before in which you watch a playthrough of a selected game - with the option to jump in and take over at any point.

A thorough museum mode digs into SNK's history with all sorts of information and art from the company's early years. My favorite revelation was the existence of a machine called The Monkey and Monkey Friend.

SNK 40th Anniversary Collection sets the standard for retro compilations. It's a blast, and a great way to learn some surprising facts. For instance it taught me that I am terrible at most arcade games. The only skill I seem to possess is the ability to walk or fly directly into bullets.

Thank you for reading this week's Video Game Article, now known as the SNK Appreciation Station.

Thronebreaker: The Witcher Tales
To be fair to Meve, her armor is pretty heavy and the throne's leg was already loose before she sat down. 8/10

The Quiet Man
Just your everyday game about a deaf main character who hears everything, in which the player doesn't get audio or subtitles. 2/10

Return of the Obra Dinn
From Papers, Please to wafers, meebs (I'm assuming those two words are nautical terms). 9/10

SNK 40th Anniversary Collection
If it took 40 years for a compilation this good, just imagine how great the 80th anniversary collection will be! 9/10

Starlink
Possibly the finest game ever made about ground-hugging spaceships talking to buildings. 6/10

Diablo 3 Eternal Collection
Easily the best version of this game, and I'd go into more detail but the entire screen is exploding as I run through it at three hundred miles per hour. 8/10

Tetris Effect
The titular effect is when the clever sound design overwhelms you until you say things like "transcendent" and "magical" and you forget that Puyo Puyo Tetris is still the best post-Gameboy Tetris. 7/10