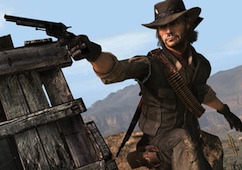 As the most fully-realized western since Time Traveler and the best open-world game since Second Life, Red Dead Redemption is holding strong as my pick for this year's top game. Two months after the game's launch, Rockstar is set to release a patch that will address the surge of cheating in multiplayer while further polishing the single player campaign.

Alien Swarm
For every dollar you didn't pay, approximately four billion aliens will rape you. 8/10

Deathspank
Some people expected Diablo crossed with their memories of Monkey Island, but this is more like Marvel: Ultimate Alliance meets the actual Monkey Island - and that's not a bad thing at all. 7/10

Little League World Series Baseball 2010
Should be sold exclusively in the children's departments of clothing stores to reach its two target markets: kids and the middle aged dudes that linger near them. 4/10

Limbo
A moody platformer in the vein of Out Of This World that - like Flower and Braid before it - will wind up getting way more credit than it deserves for trite artistic decisions that make Crash and Babel seem self-restrained. 7/10