The internet is really only good for a handful of things, and one of them is drowning out level-headed discussion with emotionally driven leaps of logic. Take, for instance, the reaction to every other word from this week's press release announcing Dragon Age 2.

"Determine your rise to power from a destitute refugee to the revered champion of the land." 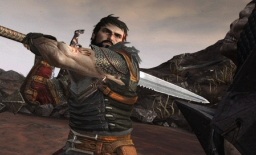 Internet Reaction: Oh, great. The hero's journey. Since every BioWare game has centered around this monomith, they are all literally the same. I cannot tell the difference between Knights Of The Old Republic and Baldur's Gate 2. I'm not just tired of a style of narrative, I am convinced that no writing within a framework that I dislike can be considered good.

Internet Reaction: There will be no strategy. This will be an action game with a cover system, and I don't like it one bit. They should have called this Dragon Effect.

The strategy in the first game wasn't even good. It was terrible. It was the easiest and worst thing I have ever played because there were dice rolls and also skills that could be abused. Now it will be worse because that quote just said that this will without a doubt be a twitch-based game.

"Dragon Age 2 thrusts players into the role of Hawke"

Internet Reaction: A character with a predetermined last name? How dare they do the exact same thing they did in the first game?

And really, Hawke? That does not fit into a world full of dragons and blood-drenched swords and talking trees. This is what happens when things get dumbed down for consoles.

I don't want to stomp around as some brute named Hank Attitude, but that is exactly what the game is going to make me do. There will be absolutely no way to shape the character. Looks like BioWare forgot that RPG stands for "role playing game" and mistook it for "really poor generic".

"Known to be a survivor of the Blight and the Champion of Kirkwall, the legend around Hawke's rise to power is shrouded in myth and rumor."

Internet Reaction: Wait, there's just one origin? You mean to tell me that the origins mechanic in Origins was specific to Origins? This is not what my imagination tells me I was promised!

What happened to my character from the first game? The one that could have died at the climax or wandered into a certain death in the Deep Roads in the epilogue? If I can't continue playing as him/her, then the entirety of Origins will have been for nothing. They should have called this Mass Dragon. Assholes.

"Discover a whole realm rendered in stunning detail with updated graphics and a new visual style."

Internet Reaction: First Diablo III, then Wind Waker, now this. They should have called this Liars That Never Made A Good Game Making The Worst Game.

I bet the critics will fawn over every aspect of this mess dribbling from BioWare's butthole like they have for the last ten years for absolutely no reason (except bribes which I know every reviewer takes) while idiots buy it in droves because they literally have no taste. I wish more people could be sensible. Like me.

Sniper: Ghost Warrior
Destined to join Sniper Elite in the "$2 on Steam" club, which is still too much for people who already know that the best sniper game is free. 5/10

Age Of Conan: Rise Of The Godslayer
No one expected the expansion to this foundering MMO to be so good, and even fewer people are expected to buy it. 8/10

Crackdown 2
The original Crackdown was pretty fun, but this is officially the laziest sequel in the history of reused art assets, animations and game mechanics. 6/10