Welcome back to Video Game Article, the only gaming press outlet brave enough to take the bold position that the Virtual Boy had games that were very red and Duke Nukem Forever is taking a while to come out. We're just that sassy. 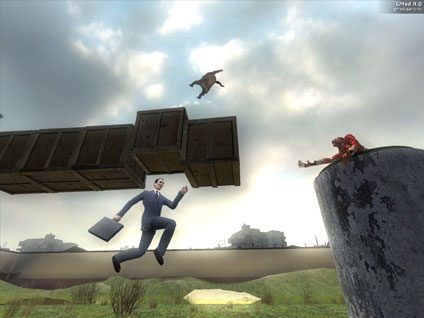 Garry's Mod: Harmless Fun With Physics Or Gross Negligence At Its Worst?
(Editor's note - The following item seemed like science fiction instead of news, but just before our deadline a trusted source confirmed that it was 100% accurate.)

By now everyone has heard of Garry's Mod, the clever modification for Half-Life 2 that allows players to tinker around with the game's physics and pose models with basically no restrictions. This sandbox of infinite possibility has been downloaded and installed on countless computers worldwide over the past year, but last week one player did something that has never been done before.

Shane Brown is a student at the University of Florida and resides in a dorm in the city of Gainesville. On Monday afternoon, Shane installed Garry's Mod for the first time, then loaded it up and played for several hours without posing Alyx's character model in a sexual position with any of the other characters.

You read that right. He never considered bending her over provocatively, didn't get a single urge to cup one of her hands on her crotch and the other on her breast, and seemed distressed when his roommate suggested spawning a clone of Alyx and just making them kiss.

The news sent shockwaves through the campus, leading to protests from nearly all of the school's political groups and Brown's eventual expulsion from the school. Brown hopes to relocate to another school to finish his education, but that might prove difficult considering he must now publicly register himself wherever he relocates in much the same way as a convicted sex offender.

Public outcry has popped up across the country, and several leading lawmakers have seized upon the issue by raising questions as to how a responsible programmer could release a piece of software that would allow Brown to act out such deviant behavior. Facing a possible indictment from congress, Garry issued a brief statement on his website claiming that a patch is coming soon to address the issue. As expected, he refused to speak with us, opting instead to hide behind the gold trimmed marble walls of his newly purchased mansion in the Hollywood Hills.

I'm Out Of Order, You're Out Of Order, This Whole Server Is Out Of Order
NCSoft and Marvel announced thay they have settled their long-running litigation in which the comic book publisher claimed that the character creation system in NCSoft's City of Heroes allowed players to recreate copyrighted Marvel superheroes. As per the terms of the settlement, NCSoft will clear an abandoned office building across the street from Marvel headquarters which has been overrun by generic thugs, for which NCSoft will receive 1) absolutely no loot and 2) a general feeling of disappointment.

Agatha Christie: And Then There Were None
This clumsy attempt to bring the popular novel (by an author whose name escapes me) to life will have you asking "Whodunnit?" as in, "Who gave the greenlight to develop a mystery game that doesn't actually involve the player doing any detective work?" 3.5/10

Call Of Duty 2
A superlative shooter that is so incredibly detailed you'll swear you're right there in the second World War, playing Call of Duty 2 on the Xbox 360 while everyone else is fighting and conserving pantyhose. 9/10

King Kong: The Official Game Of The Movie
While I question the logic of turning an eighty year old movie into a video game and sincerely doubt it will generate any interest among today's youth, this short-but-sweet adventure is more than enough fun for a rental. 8/10

Guitar Hero
I was saddened when I initially found out that Colonoscopy Hero was abandoned by its developers to make this game instead, but rocking out on a plastic guitar with buttons instead of strings turned out to be so ridiculously awesome that my emotional wounds have healed and left only a mildly hideous scar. 9.5/10

American Chopper 2: Full Throttle
Customize your own eyesore of a bike then race it against tattoo artists and hobos for no particular reason in this game that's sort of like the PC classic Full Throttle, only with 100% less Tim Schaefer and 150% less fun. 1/10

Animal Crossing: Wild World
Writing letters that lovingly detailed the most gruesome and upsetting real-life news stories I saw each day then addressing them to blockheaded pink elephants that never stopped grinning was the most fun I ever had with my GameCube, and now that the series found a home on the DS I get to do it while I'm out and about! 8.5/10

As we all know, the people who make video games have pretty much no clue what they're doing. It's the industry's best-kept secret and it isn't even that much of a secret, which just proves how inept this whole operation is. The only way a game will turn out good is if its designers pore over their official forums and GameFAQs, saving each post they come across which remotely resembles coherent thought. They then scan the content of these posts for horrible suggestions made by people who have never created a game in their lives and immediately implement them into their games. The problem with this system is that going through all those posts is time-consuming, which is why development cycles have steadily increased over the years.

To save time for everyone involved in this grueling process I will provide all the suggestions from now on. From time to time I'll be imparting my absolutely free ideas to game companies, and all I ask in return is 5% of the sales profits from software titles which use them. Everyone else can stop posting, thanks.

For the first installment of Free Ideas, I'll offer up some incredible games which would make Nintendo's upcoming Revolution a must-own system. The controller is so unlike anything currently out there and so much fun to visualize using that I could come up with winners like these all day. 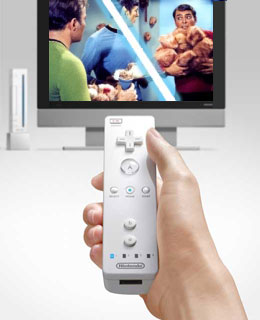 Did someone say killer app? Well would you mind keeping it down? I'm trying to write over here.

Let's face it, the Revolution's controller was practically made to simulate the sensation of holding a lightsaber in your hand. Imagine a first person game set in the Star Wars universe where you, as a Jedi, could deflect laser blasts back at Stormtroopers and fight lightsaber wielding baddies such as Boba Fett and Darth Vader one on one! Elements of lightsaber combat have been attempted before in games such as Jedi Outcast and Yoda's Desktop Adventure, but never with a control setup this intuitive. 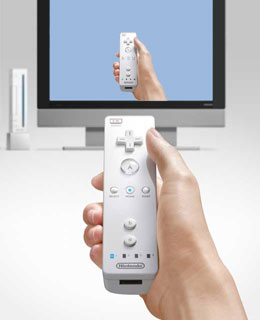 In this game you'd aimlessly move a rendered hand around the screen by moving your ACTUAL HAND. Made by an art house development team that favors minimalism above all else much like the Ico and Shadow of the Colossus creators, Hand Hand Revolution would have no characters to interact with, no points, no user interface, and no objectives. This would be an underground hit with a loyal fanbase almost entirely comprised of Wired and Slate writers as well as stoners. 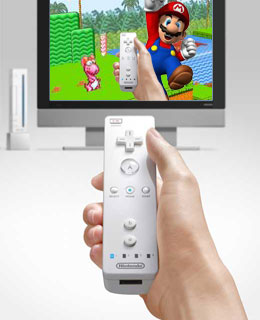 Just like Hand Hand Revolution, but released six months later by Nintendo and set in a coldly rendered and uncreative version of the Mushroom Kingdom with Mario cheering you on. Yay! Will the hand-moving fun ever stop? Maybe when you're dead. 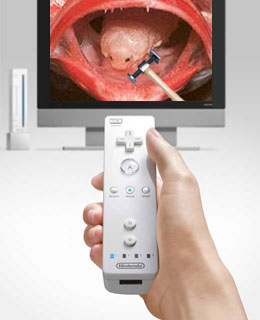 Oh God, do you see that thing? I don't even know what it is but its mere existence infuriates me. Pick up that object over there and start hitting it! There you go. The more you do that, the better I feel about this whole situation. Is it dead? Hit it some more until there's nothing left but a sticky spot on the ground, then hit that for a while.

Woah, you did it! Thanks. That thing was really creepy. Here's some experience points.

Don't celebrate just yet, there's another thing! If I were you, and I know I'm not but this is just some friendly advice, I would probably consider hitting that thing too.

There's probably more of these things. Once you level up you should look around for something bigger to hit them with.