My Cat Ate My Update 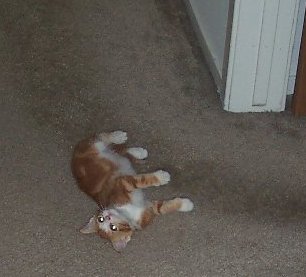 Tragedy struck the Paskiewicz household yesterday when our retarded cat decided it would be a great idea to eat five hair bands, a piece of our couch, and some straw. I came home from work to the pleasant sight of vomit sprayed in little spots on the carpet, and after an awesome projectile vomit exhibition, we decided to take her to an emergency vet. The X-rays showed without a doubt that there was inedible material such as plastic and metal in her GI tract, and there was no choice but to do exploratory surgery on her. I imagine it was like the scene in Jaws where they cut the shark’s stomach open and pull out bunch of crap, tossing it on the ground behind them. I wouldn't be surprised if they found a Rhode Island license plate or a child's leg in there.

So I guess this is just an elaborate way of saying there is no update today because I'm busy taking care of my goofball cat. But I'll tell you what, just so it sort of looks like a real update to the people that just skim the words and look at the pictures; I'll create a list of things they found in my cat's stomach. That way old man Lowtax will never be the wiser. ;-)

DVD of The Sopranos, Season 3

"A Boy and His Blob" for NES

Entire collection of Marvel's "What If?" comic series

As you can see I have my hands full with a downy kitten. I'm just glad we won't be having kids anytime soon (I'm neutered). I promise next week that I will have a really funny* update for your reading amusement. If you want to send our cat, Bella, some get well e-cards, send them to her an email. Just be aware that she will not read them personally because she is a cat, stupid! Thank you.

This is not my own fantastical opinion--many people have thought the same; but I feel it so deeply that I'll tell you what I think. I believe that to execute a man for murder is to punish him immeasurably more dreadfully than is equivalent to his crime. A murder by sentence is far more dreadful than a murder committed by a criminal. The man who is attacked by robbers at night, in a dark wood, or anywhere, undoubtedly hopes and hopes that he may yet escape until the very moment of his death. There are plenty of instances of a man running away, or imploring for mercy--at all events hoping on in some degree--even after his throat was cut. But in the case of an execution, that last hope--having which it is so immeasurably less dreadful to die,--is taken away from the wretch and certainty substituted in its place! There is his sentence, and with it that terrible certainty that he cannot possibly escape death--which, I consider, must be the most dreadful anguish in the world.