Stop Putting These Enemies In Games

There is a fine line between enemies that present a challenge and those that are simply annoying. Actually, that's a lie. The line is pretty wide. Think about the gap between our fantasies when we first heard about motion controls and the horrible reality that came to pass. It's that wide. 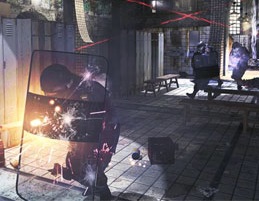 Some enemy archetypes have never been fun in any form, yet they keep popping up. Why? Maybe they're easy barriers to put up between the player and the finish line, prolonging the playtime without enough consideration for the quality of the experience. Or maybe some developers just hate us.

Either way, games have been around long enough for us to collectively know better. Let's get rid of these bad guys for good.

You're hitting a dude, and he suddenly reappears somewhere else. Great. You know what that adds to combat? Probably not strategy. Probably not excitement. Definitely a few moments of finding him once again, possibly having to then walk across the screen for a few not-action-packed seconds, hoping he doesn't teleport again.

This is made worse when the teleporting enemy has a wind-up animation which renders him temporarily incorporeal. Your options are to sit tight while he wastes more of everyone's time or wail away at his invincible head out of pure frustration.

Option 1: The guy with the huge shield has a weak spot that you can attack from the front. His feet are sticking out. He has a conveniently open portal in front of his face the size of a tuna can. Whatever. He will otherwise be invincible, and the whole time you're plinking away at the tiny vulnerable point, you'll be thinking about how weird it is that he didn't cover himself all the way.

Option 2: You have to get behind the guy with the huge shield and hit him from behind. Every single time. A bad guy that was presumably tossed into the mix to make things interesting has only added one more predictable and creatively restrictive element to combat.

If we're going to have dudes with shields, make the shields smaller and require bad guys to dynamically move them in front of attacks as they maneuver in battle and engage us in other ways.

Robo-frogs and robo-mosquitoes in Daikatana. Pygmies in Diablo 2. Duke Nukem Forever's impregnators. Has anyone, anywhere, at any time, enjoyed fighting a swarm of small fast-moving enemies? No. Of course not. These are the video game equivalent of a laser pointer flickered across the ground in front of a cat. Only, somehow, more demeaning.

"You have to be kidding me. Now I have to hit him again? Why? Will he just get healthy a second time, or is there some trick I'm missing? Great, now he's healing faster than I can hurt him. Maybe if I use this other attack... oh, he teleported. Of course."

Yesterday
From the makers of Runaway: The Dream Of The Turtle, The Next Big Thing, and basically every adventure game that seems quirky and interesting until you took a closer look. 4/10

Tiger Woods PGA Tour 13
EA keeps holding back courses then asking people to fork over money for DLC which you'll disable in a few years, and it keeps working. 5/10

Resident Evil: Raccoon City
Seriously, Capcom, what in the world made you think a cut-rate Gears Of War would revitalize this franchise when people are relieved that Gears Of War is finally taking a breather? 5/10

Ninja Gaiden 3
The first few Ninja Gaiden games were hard to get through (because they were terrible) and this one is nearly impossible to finish (for the same reason). 4/10

Yakuza: Dead Souls
Stop me if you heard this before - We're taking our franchise and adding zomb- OH GOD SOMEONE WISHED I HAD NEVER BEEN BORN AND NOW I'M DISAPPEARING, BUT IT'S TAKING ME JUST LONG ENOUGH FOR ME TO FINISH THIS SENTENCE! 4/10

Kid Icarus
This is what you nerds have been waiting 30 years for: irreverent fourth-wall breaking anime. 7/10