To be honest I'm just biding my time until GTA4 comes out. Based on the leaked videos I've seen it looks like Liberty City is paved with butter and the pop-in is ridiculous, but what the hell, I have no will of my own. I'm buying it.

"ONEWHITEDUCK"? Ducks don't usually have this much of a stick up their asses. I wonder what went wrong in this duck's life... Such a shame.

I don't know about caged, but maybe we can put them in like a gay natural habitat for them to live as they do in the wild... Just an idea.

Internet tough guy? Jboss321 is more like Internet fluff guy! I'm not going to lie to you, I've been drinking.

Did anybody else get hungry while reading this post?

I hate PC fucktards. It's all about Xbox 360 supremecy! 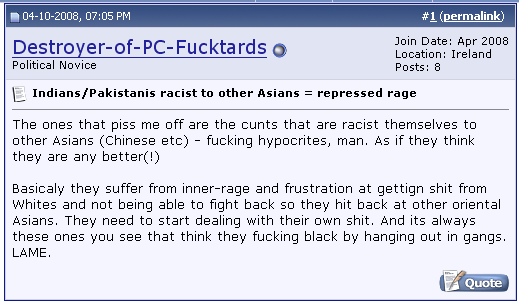