Sunday, Dec 26, 2004 by Zachary "Spokker Jones" Gutierrez
Welcome to the wide world of mentally disturbed people who managed to set up a computer and learn how to use it!

Something happened in Everquest 2 and for some reason it seems to be making a lot of waves in the Faggot RPG Player community. I don't know why anyone cares about this. I don't know why anyone would read about it. But hey, who am I to argue? Apparently some guy was caught having cybersex with some other player in the popular waste of time Everquest 2. I guess this is one of those internet things that gets passed around like a cheap whore at my grandma's bachelor party until it's all used up and more pathetic than funny. But that isn't all friends! It turns out the guy has deemed it necessary to defend himself against these wild accusations that he had sexual relations in an internet game by posting a billion messages on a forum called EQ2 Permafrost. Here are just a few of his posts. I don't know, folks. I just don't know.

Holy shit! You have incurred the wrath of "Ceciliantas" and you will face his Justice. Not his justice, but his Justice. You're in for it now. There is no going back from here. 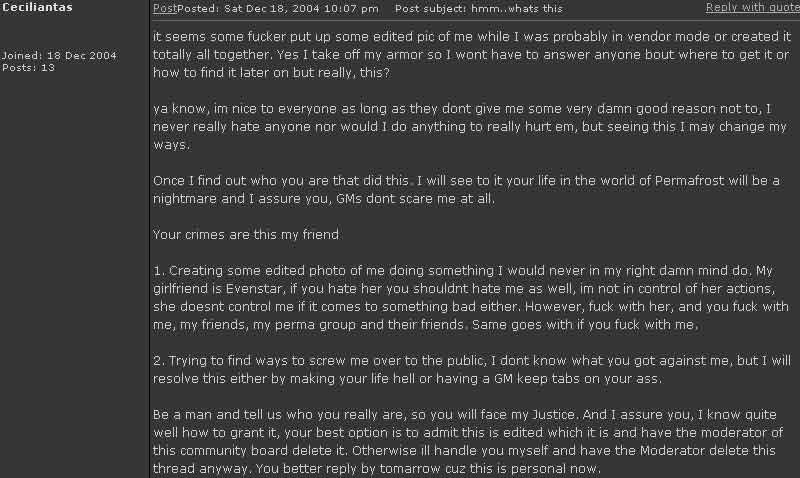 Oh man. I would just die if I got on "Ceciliantas'" ignore list. This guy takes his aggro tanking VERY seriously. You don't want to fuck with a pissed off Everquest player. I did once and he made me smell his armpits. That was the worst day of my life. 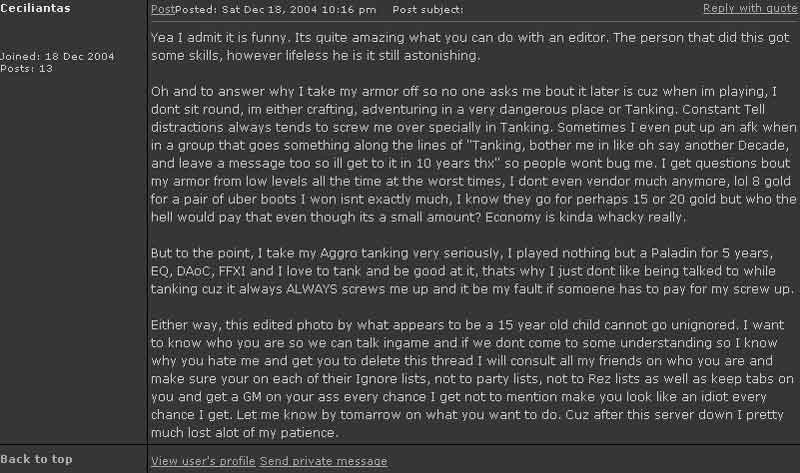 I'm too nervous to even talk to girls on the internet!

Alright, now we know for a fact that this guy is lying. No Everquest player brushes his teeth. It just doesn't happen.

I am a big man in Everquest buddy. You do not want to fuck with me. I'm the fucking Godfather of Everquest. I AM RESPECTED IN THE EVERQUEST COMMUNITY AND YOU WILL BOW DOWN BEFORE ME.

Whenever some idiot who is arguing on a message board says, "I'm done with this. That's all I have to say. I'm leaving!" they always continue posting at least a million more times. That's how it has always been. That's how it always will be. 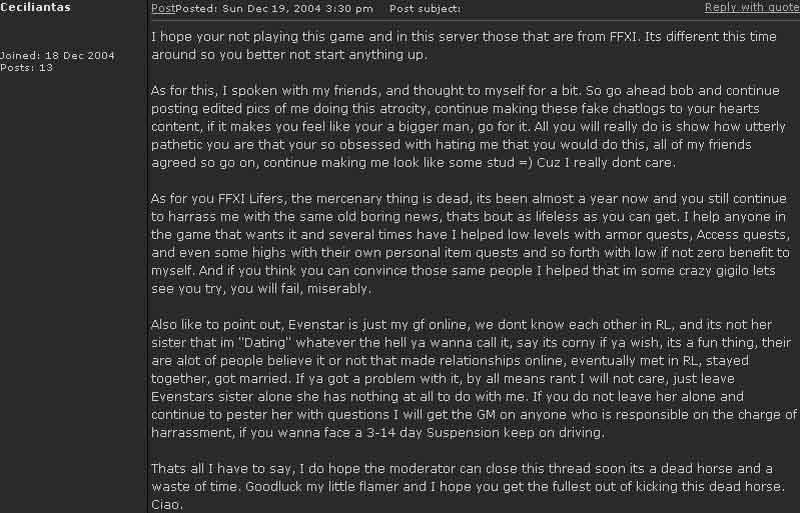 Am I right here folks, or am I right?