Sunday, Jun 11, 2006 by Johnny "Doc Evil" Titanium (@fart)
There are some weeks I begin to think that maybe we've found every horribly sick forum there is and there's nothing great left, and then there are weeks like this week when I think of how foolish I was on those other weeks.

I'll be honest that this is only here because I'm surprised anyone's still talking about this show at all. I've only seen maybe half a dozen episodes but each one was comedy poison. The only person I knew who was really into it was the single lady that lived across the street. She had one of the loudest cars ever. I think she figured if she watched enough episodes that Tim Allen would swing by and fix it or something.

Last summer we had a massive infestation of Home Imps in the garage. Found a giant nest behind the water heater and ended up calling a professional. 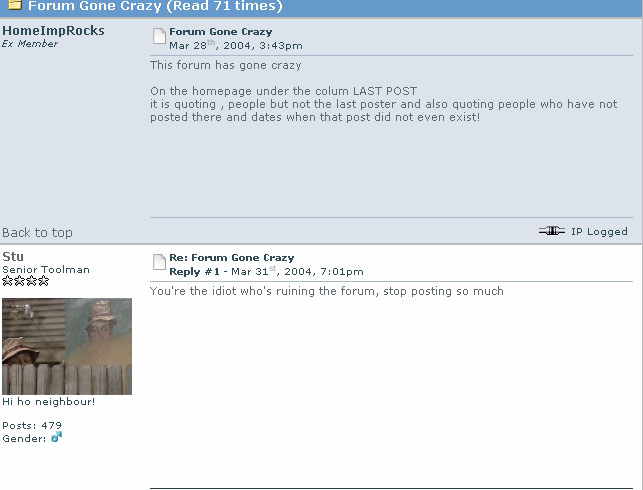 Hey, remember when Tim grunted? That was my favorite episode.

One by one, "Timbo" exposes Home Improvement's forbidden secrets! How does it feel, Hollywood, to have your entire house of lies come crashing down around you???

I am shocked by this thread. Not by the criticism of Tim's new look, but by the part about Jay Leno and Tim Allen both on TV at the same time and the TV apparently remaining on during that.