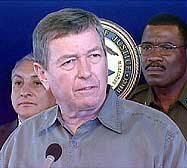 "I'm John Ashcroft and I'm looking out for terror! And who are these guys behind me?"

In yet another shocking twist to the previous shocking twists, John Ashcroft, the CIA, the FBI, the NRA, and NASCAR have all declared that we, the citizens of the United States of America and Texas, should once again be on a terror alert. Apparently there are still some nutty guys with beards running around and trying to make things of ours explode which is a bad thing because most stuff shouldn't explode unless we're talking about that Flavor Burst gum which explodes with fruit flavor. Flavor explosions are okay; plane explosions are not okay. So with that clarification out of the way, Ashcroft has instructed us to be on the highest terror alert level possible. Some of you may not know what being on terror alert exactly entails, so let me explain it in a simple way that allows me to also use those little blue square bullet points:

SCENARIO: You see some bearded foreign guy with a bomb.
TERROR ALERT: You should notify the proper authorities like the Police or somebody who is at least dressed kind of like a Police officer.
NON-TERROR ALERT: Walk in a brisk fashion away from the bomb and go about your normal everyday routine like President Bush said or else the terrorists "will have won."

SCENARIO: There are suspicious people doing suspicious things outside your house while they speak a suspiciously foreign language.
TERROR ALERT: Call the White House and ask to talk with John Ashcroft. If you get his answering machine, demand that he call you back. To show that you're really serious about this, make vague death threats against him and his family.
NON-TERROR ALERT: Assume they are just some kids playing a juvenile prank at your expense. Grab a gun and shoot them.

SCENARIO: You are on a plane and somebody gets up and shouts, "WE HAVE EXPLOSIVE, SIT DOWN AND DO NOT RESIST!"
TERROR ALERT: Try to tackle them to the ground while muttering some catchphrase into your cellphone which your family will then attempt to trademark and profit from.
NON-TERROR ALERT: Close your tray table and put your seat in an upright position.

While these tips are incredibly useful, they do not really address the major problem that we are dealing with in this situation; the fact that the phrase "terror alert" is incredibly misleading. Now don't get me wrong, I know these people are terrorists and when they attack it can labeled a "terrorist attack." However, the term "terror attack" makes me think about terrifying attacks, and I don't think crazy Islamic fundamentalists are exactly that terrifying. Crazy Christian fundamentalists maybe, but not Islamic. When I think "terror attacks," I think of the following: 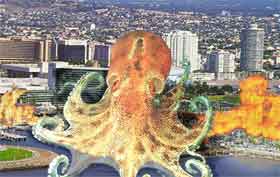 Now THIS is terror! Note its lack of beard and bombs.

I'm really quite afraid of all of that shit from the sea. Well not starfish or algae, but the creepy things like squids and sea cucumbers and octopuseuseususes. I mean, have you seen pictures of those things before? They're scary as hell! And some of them have BEAKS!!! BEAKS, for Christ's sake! The only animals that have beaks are birds and Sandra Bernhardt, not any weird fish floating around the ocean (although the thought of Sandra Bernhardt on the bottom of the Pacific Ocean does appeal to me). Add to this the fact that countless 1950's black and white sci-fi films have proved that evil people regularly dump evil radioactive waste into the ocean and you've got yourself a recipe for TERROR. As we all know, being exposed to radiation makes you grow very large and increases the output of your evil gland. So now we've got giant octopuseiseusis floating around looking for objects to do evil things to. And guess what? They hate coastal towns. So one day you'll be sitting around, minding your own business and watching people run in front of cardboard cutouts on public access television, and the next moment you'll be dead because a giant radioactive octopus just crushed your house with one of his many tentacles of concentrated terror. Then what would you tell your children and grandchildren? Nothing, because you'd be DEAD. If you're lucky enough to not live in a coastal town, don't get your hopes up either, jerk; those laser beam eyes will be able to vaporize most of your private property within seconds. I'm not sure how radiation gives you laser beam eyes but I'm sure it involves something highly scientific that I can't possibly comprehend such as isotopes or atoms or nougat.

JASON VOORHEES AND / OR MICHAEL MYERS

As popular media has shown us time and time again, you can't keep a good serial killer down. Many people have fallen prey to the clutches of wily superhuman criminals Jason Voorhees and Michael Myers, and there are many pie charts I could point out which prove my point. There's no way for you to hide from these evil undead killers as no matter where you go they'll invariably somehow materialize right behind you and proceed to ram some sort of pointy object into your chest until you stop living. If you are really lucky and manage to run away from them for roughly 90 minutes or so, the terror still won't be over because they'll come back from the grave again two years later. Don't depend on Donald Pleasance being there to save you either, as I think he's been dead for roughly half a decade and he doesn't have the power to rise from his grave because he was too bald. 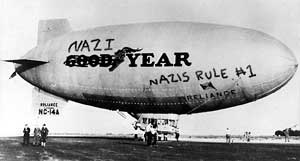 One of the dreaded Nazi Blimps getting ready for flight.

One of the most devastating tools of destruction back during the Civil War was the dreaded Nazi Blimp Attack. Nazi cyborg aliens would pilot these humongous airships over enemy cities, unloading Nazi bombs that would not only cause buildings and people to explode, but additionally spread herpes and other nefarious biological attacks. The government told its citizens to do such helpful things as "duck and cover" and "buy more war bonds" but that didn't work because let's face it, there's no possible way to destroy a Nazi Blimp. The Nazis had the best engineers in the history of engineering, allowing them to create devious and ingenious weapons like the 782mm howitzer, the UFO, and the rocketman jumpsuit. Now THAT'S terror, ladies and gents!

ZOMBIES AND MUMMIES COMING BACK FROM THE GRAVE

If the dead were to suddenly arise and start lumbering around like drunken fratboys, we'd have a national crisis on our hands. How do you kill dead people? How can you make something that's already dead even more dead? Well according to movies, the only way to repel zombies is to shoot them in the head, instantly killing them once again. With the possible exception of Texas, I don't think our states have enough bullets to kill all the dead people in the world to death once again. And what if you kill the dead person and then their dead dead corpse arises from the grave of its grave? Ever think about that? Of course you didn't, probably because you were too busy worrying about the giant octopus threat. IT'S GOT A FUCKING BEAK for crying out loud!!!

There is, however, a slight chance that when the zombies and mummies reanimate themselves they aren't totally 100% evil. Sure every zombie flick has made them out to be these slowwitted, repulsive, braindead sacks of decaying flesh (not unlike Gamespy's Sal Accardo), but I think there still remains a slim chance that a couple of these undead creatures might not be completely convinced that evil is the way to go. If we could set up governmental task forces that would spread positive zombie and mummy propaganda, I believe we could eventually win their hearts and empty minds over. Then we should enslave them and force them to perform menial chores all day like mow the lawn or paint our decks. I'm not exactly sure how I went from the subject of zombies to painting decks, but I can only assume that it had absolutely nothing to do with all the brain medications I'm currently abusing.

In conclusion, although John Ashcroft has informed us all to be on terror alert, I feel his vague and misleading advice doesn't really help you and I, the average citizen, remain vigilant to the true terrors this world spawns. Now make no mistake; these terrorists are undoubtedly big jerks who we should all be alert for. But at the same time, there are bigger, more important wads of terror we should be worrying about, terrors that are hardly ever mentioned in news media outlets that don't contain 10-page features on Batboy. Now THAT'S terror!