First of all, Michael Jackson is probably guilty of child molestation. Let's get that out of the way right now. Second, from what I have seen on the MJJForums I can only conclude that Michael Jackson's defenders do not have eyes or ears. The wierdness, the creepiness, and crap like, oh nothing, EVIDENCE, is so stacked against Jackson that there is no way that any normal human being can believe that he is innocent. He may have not done it out of malicious intent. Granted, the guy had a shitty childhood, but regardless of his past there is something going on there, something very inappropriate.

Listen, the guy needs help. If he wasn't as famous as he is he wouldn't have been given the benefit of the doubt by anyone. He would have been thrown into a mental institution a long time ago. If I was getting countless plastic surgeries and sleeping with children my dad would show up on my doorstep with a shotgun and that would be the end of me. It's as simple as that folks.

What an acrocity! If this was America the ACLU would be all over this.

Who the fuck puts their driver license in their sig? 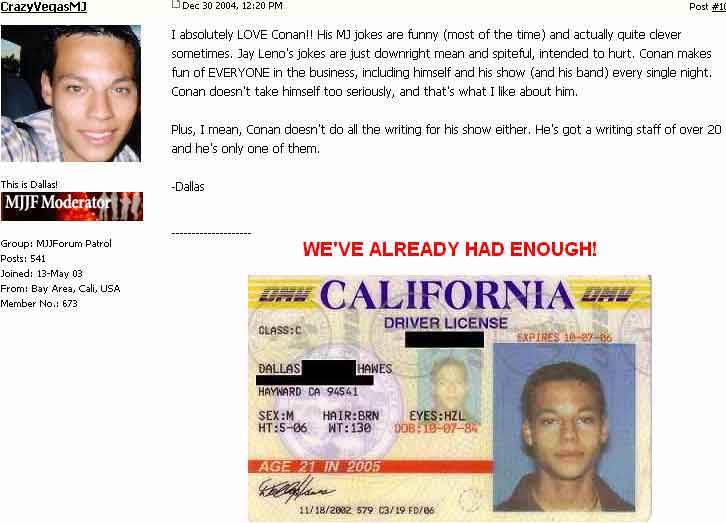 That's all well and good, but he probably molests children you know.

My nose is still firmly attached to my face. I've got that much going for me.

Your dad should have kicked your ass a long time ago.

I wish I could sleep with children and have hundreds of people defend me on the Internet.