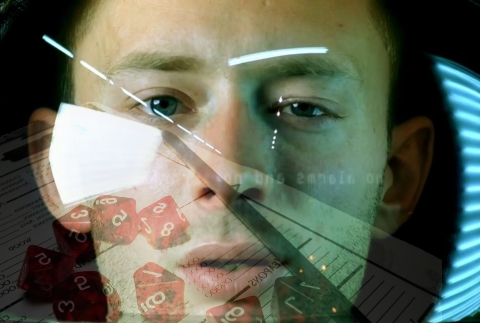 [Navigating the Labyrinth of Fog and Shadows]

[Upon returning a beloved fowl to Crod, the emotional giant quest-giver who begins crying enormous tears of joy upon the party]

"Rain down, rain down
Come on rain down on me
From a great height
Crod loves his chicken"

"Sing
Us a song
A song to heal
Our harm"

[Rolling a 20 on a perception check]

"I jumped in the river, what did I see?
Bag of Holding waiting for me."

[Pickpocketing dozens of random students in a magical college as a favor for the party's mage, who wants a Time Stop scroll]

"No alarms and no surprises please."

[The party's Wild Mage casts a spell that backfires spectacularly]

"Just 'cause you feel it
Doesn't mean it's there"

[After three days without rations, eyeing an approaching Gelatinous Cube]

[Turns a corner in the Labyrinth of Shadows and Fog, only to find the spot where the party began one week earlier]