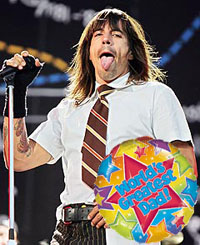 Anthony Kiedis is so inept at both singing and rapping that the listener is often hard-pressed to determine which one he’s attempting. “Dani California” is perhaps the greatest example of his utter failure as a vocalist to date, with lazy, half-sung verses, a go-nowhere chorus and Chili-Peppers-by-number lyrics that could have been transplanted from any other song in their entire catalogue. In many cases, the musical prowess of his backing band can at least hold my attention with their funkiness, but they fall far short of the mark on “Dani California,” choosing to simply perform an undisguised cover of Tom Petty’s early-Nineties hit, “Mary Jane’s Last Dance.”

But their plagiarism is old news, and it’s beside the point: it would be far too complimentary to make it seem like their Petty theft is what makes this track bad. In fact, “Dani California” is bad on its own terms and a failure on its own level. Tom Petty sucks, but let’s not besmirch his good name by implying that it’s his fault that the Red Hot Chili Peppers put out a shit single. They’ve been doing it for decades without his help, and, god help us, they’ll probably be doing it for decades to come.

Just so long as they switch up their singles between “ballad” and “funk rap,” people will never realize that they’ve been releasing the same two songs every couple of years since forever. One day, the public will catch on, and the jig will be up… actually, I suppose people never figured out that Aerosmith was doing it.

If you’re one of the people who still listens to the Chili Peppers, I have special words for you: you have no taste. You do a great disservice to rock and roll by tolerating mediocrity, either because you are lazy or because you are mediocre yourself. Maybe both.

Ugly adolescent fantasy merges with primitive Guns ‘N’ Roses pastiche in this laughable, po-faced melodrama. In classic Serious Young Man fashion, the doofs (dooves?) in Avenged Sevenfold have worked out a truly gnarly plot to show how F***CKING BAD**S they are: 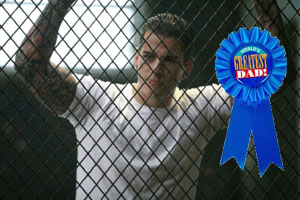 I am a very serious person.

2. Cavorting is interrupted by the other idiots in his band, who have come to lead him to his grim purpose.

3. Pregnant girlfriend clings to him, urges him not to follow his ne’er-do-well bandmates to whatever doom they have constructed for him.

5. Robbery goes even more awry when police show up; everyone escapes except singer, who is thrown in maximum security prison. His head is shaven, his piercings are popped out, and he looks only slightly less stupid than before.

6. Pregnant girlfriend visits singer, screams at him through classic glass-and-phone prison interface (from the movies).

9. Anyone who’s still watching the video at this point is a masochist, or retarded. The clip is only five minutes long, but it seems infinitely longer than Guns ‘N’ Roses’ “November Rain,” which was like two hours.

The video falls just short of being accidentally funny. In fact, it may have succeeded in unintentional comedy if not for the song, which is so abominable that it debases the whole ordeal even further than the ugly, puerile, hammy visuals could do alone. While the group has the superficial technical chops to pull off a convincing, if low-rent, parody of GNR, they might want to invest in a band member who can actually write songs; I’ve heard Henry Kissinger speeches with more coherent tunes.