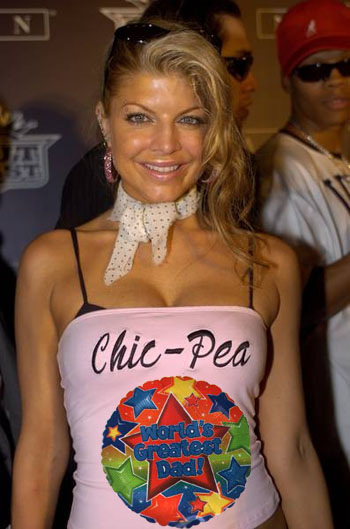 Yecch! What a visage! I couldn’t possibly handle this alone, so I flew in Zack “Geisteditor” Parsons from his Aspen chateau for a little tête-à-tête:

Zack:Fergie takes a break from romancing Linda Hamilton from her secret sewer hideout.

Dave:She looks like a wax statue of a female wrestler that's undergone severe basting. The orange sheen of her face really brings out the greasy grey streak in her hair.

Zack:I think that little handkerchief around her neck is hiding some sort of seam. Like where they attached her monstrous waxen face to the body of an alcoholic college girl paying her way through school by winning amateur nights at "Ratty's Revue"

Dave:The tube-top adds to the illusion that she is a giant orange sherbet Flintstones "Push-up" frozen treat.

Zack:Yeah, I would say a thermometer pops out of her when she's done tanning, but I'm pretty sure all of that color is courtesy DOW Corning and is applied from a cropduster.

Dave:Is that lipgloss, or did she just finish eating a candle?

Zack:Her avalanche of bleached and pounded and re-highlighted coconut hair really does a lot to remind you that she has a whole lot of denty face chiseled out of cured lard.

Dave:She needs to get some arm-handkerchiefs to cover up those needle tracks. Once she gets home from the party, she can just scoot them up to her biceps, tighten them up a couple notches, and tap out a nice vein to inject some more meth/rapid aging potion speedballs.

Zack:And then she can press the lipid mass of her face into the octagonal horror mold for the night.

Dave:She's got a jaw line like a quarterback, but I'm willing to bet she's been sacked more times than anyone in the NFL.

Zack:Have you ever seen An American Werewolf in London? Fergie looks like someone took the guy from that about ten seconds into his werewolf transformation and pressed a pair of those creepy blinky doll-eyes into his face. I look at her mouth and nose and I can hear the crackling bones on the soundtrack as she gives in to her lycanthropic lust.

Dave:Yeah, if she bites you, you turn into a giant herpes sore every full moon.

Zack:Her humps cannot be cured, but with treatment symptoms may diminish.

Dave:Even if no outward humps are visible, it may still be possible to spread stupidity to others.

And thus concludes the 2006 World’s Greatest Dad Awards… but read on!

Last year, I let the readers speak out on their least-favorite music of the year, and with spectacular results! I would be a fool not to do it again, so I’m offering the opportunity once more. In the next Your Band Sucks, I will air all the best reader grievances! Make up your own World’s Greatest Dad award categories and winners, and send me a brief write-up. You’ll get famous! Even though you’re too stupid to follow directions, here are some guidelines:

Send me an e-mail with the subject: “WGD: [Name of Award].” For example, “WGD: Worst Album by an Athlete” or “WGD: Best Musician Death.” In the body of the e-mail, write the winner of the award and a write-up of why you’ve chosen them as the winner.

Not too long, not too short! I’d like a minimum of 150 words, a maximum of 350. I’m not totally strict about these limits, but from all the hate-mail I get, I know that my readers have a tendency toward being a little long-winded.

Not too obscure! I’ll be highly unlikely to print a summary of the worst Peruvian death-metal song about Hobbits. Unless it’s hilarious.

Tell me your name, jackass! I don’t want to credit these to “JAWAGUY2035” so, you know, put “Ben Eggers” or “Debra Kraber” or “Dave and Colleen” or whatever your stupid name is at the end!

If I get enough good responses, I’ll run the thing! If not, oh well, I tried!