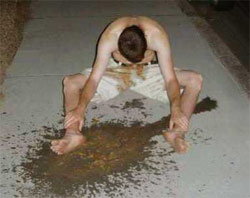 The summer puking hobo is the most vile breed. Many names and slang terms have been used to describe the police. You hear them referred to as "pigs," "the fuzz," "the man," "tony two-tone," "slick milk," "ol' barn ape," "crunchberry," "Susanne," and even "handsome." There are hundreds of epithets and nicknames for police, but I don't feel any of them are accurate. I prefer to think of police more like my collection of all-natural hairy woman magazines: they're great to have around when I need them, but if I see them in public I start feeling really uncomfortable and guilty.

When you've got a hobo making sick on your front door at three in the morning on a Tuesday a policeman is a wonderful thing. The police will come and shine some flashlights in bloodshot eyes and then load the hobo into their car so that the hobo can be released in the wild far away from civilization.

When you're driving down the street trying to text message your friend and eat a chalupa in peace, that cop car in your rearview mirror is like an accusatory finger. Even If you're innocent you feel guilty.

Having an unexpected encounter with the police can range from slightly uncomfortable to downright terrifying. However, as the years have gone by police have been getting progressively scarier.

Just about everyone in America with a security job carries a firearm. Mall cops, warehouse guards, the guy who watches the screens in a Wal*Mart; they're all packing heat. Even a security guard in an Apple store probably has a very ergonomic and trendy pistol. It may be solid white and shaped like a paperback book, but it will hurl bullets at the bad guy's face if you use the scroll wheel.

Americans get that it can be a dangerous world and that policemen need to be able to take a life in certain situations. Accidents happen and bad cops can shoot good people, sometimes they even get away with it, but the guns aren't the real problem. 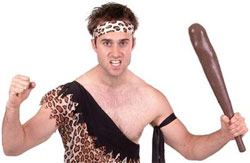 Detective Stive Uggzalez is on the case. What makes the police scarier year in and year out are the devious technologies cooked up to resolve situations through physical force without killing somebody. Until the 1980s, most cops only had one tool at their disposal: a wooden club. In use since caveman times by caveman police, this simple device has allowed cops to have a slight advantage over unarmed criminals.

With the wooden club there was an honest interplay between cops and the public. It was understood that if you try to hit a cop he is going to beat your face with the club. Sometimes he might hit you with his club once or twice if you get lippy and no one is around. Not cool, but it was what you get for mouthing off to the cop on a deserted road after he pulled you over for a busted taillight. The club was just a harder and hurtier version of a fist, and you can hardly expect a cop to go fistless.

Throughout the 20th century the wooden club was upgraded from time to time. The nightstick was in use for many years, but that was just a club with a handle. A more recent innovation is the collapsible baton, which is just a club that you can wear on your belt more easily. Despite the updates, the equation with police batons is the same: fighting a cop equals you busted upside your face with a club.

Yes, a cop could kill or injure you with that club, but it's something he has to seriously attempt. He can't just tap you in the back with his baton and you drop dead. He has to really work at it and put some effort into it. It's a project. 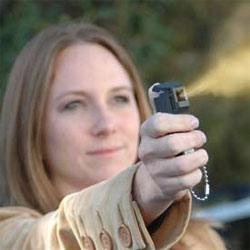 Another one of my hot dates ends unexpectedly.In the late 1980s police added a new nonlethal weapon to their arsenal. Pepper spray, or Oleoresin Capsicum, is an oily spray containing the pepper-derived chemical capsaicin. It is designed to incapacitate or deter criminals by causing burning pain and inflammation of the mucus membranes. Think of it as spray-on hell.

You know that feeling you get when you're on the toilet emptying out the contents of a particularly spicy meal? Imagine that feeling times ten in both eyes and your sinuses. Remember that in most cases the human asshole can't cry and spread the burning. The oily nature of the spray means that once you are hit the burning agent is difficult to neutralize.

Pepper spray was issued to police officials to deal with situations where lethal force might be necessary, but the threat to officers was not overwhelming. An example might be a person threatening officers with a sledgehammer or a chair leg or an icicle. In a situation like that police could shoot their attacker, but they could also save that person's life by incapacitating them with pepper spray and waiting for the icicle to melt.

It sounds sweet on paper and in practice it has no doubt saved many lives of officers and criminals. However, pepper spray has been documented as causing potentially fatal respiratory conditions and serious injury. Pepper spray has contributed or caused the deaths of at least 63 people in police custody in the United States since 1990. The effects of the capsicum can also cause permanent damage to mucus membranes, including the possibility of permanent vision loss.

Those guys were threatening the cops and they deserved it. They didn't really need their eyes or lungs, right?

I would hope, but one of the problems of supplementary nonlethal weapons like pepper spray is that the officers can become dependent on their use to subdue nonviolent offenders. A guy with an icicle deserves an eyeful of pepper spray, but what about some guy who is refusing to show his photo ID or a protestor chained to a door?

Spraying pepper spray on someone in a situation like that would not even seem to be helpful to the officer. The cop could write the person a ticket or unchain them from the door and put them in a paddy wagon instead of dealing with a screaming maniac that feels like you just set their face on fire. It would seem in those cases that the police officer is the one making the decision to escalate to violence.