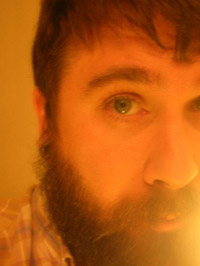 Can you believe I wrote all that BEFORE I found this magnificent picture? This guy fits so, so well.Identification Like a baby bird who has fallen from the nest, a twee twit is simply too soft and gentle for this world. He cannot abide bright colors or harsh materials, so he is usually swaddled in soft, pastel sweaters and corduroy pants. He might have a beard, because shaving is far too scary, and stubble is like sandpaper against his delicate features. He is mumbly and soft-spoken, but he doesn’t mind being unintelligible; he wouldn’t want to impose upon you unduly by putting forward an idea. He’s a cat person. He’s almost too much of a feminist to tolerate the act of sexual intercourse. He’s had the same girlfriend for eight years, and he doesn’t mind the fact that she’s gained a little weight. They throw the nicest dinner parties.

How to Tame a Twee Twit: Give him a hug, or bake him some cookies. If you meet him in a record store, say “boy, I wish all Pavement songs sounded like ‘Here.’”

Benefits of Friendship: Twee twits are pretty much guaranteed to be nice, reliable, steadily employed, and inoffensive. They don’t mind packing a little bit of a paunch, so they’ll be willing to eat greasy diner food with you at 4 in the morning without bitching about gaining an ounce.

Drawbacks of Friendship: Two words: Belle & Sebastian. There’s no escaping the fact that these guys like boring, boring music, and they’re going to get uncomfortable if you blast any crunk in your car (and why even have a car if you can’t blast crunk in it?) If his girlfriend dumps him, you will have to see him cry, and his tears and snot will get all in his beard.

Scene Legends
For this segment of the Field Guide, I have interviewed a legendary player of the bustling Houston scene, the incomparable Jonathan Williamson. 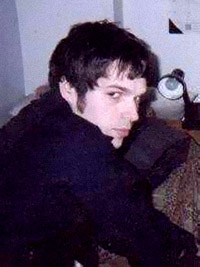 You are in the midst of greatness.Identification “Did you ever see that movie 'Saturday Night Fever'? You remember the scene when he first walks into the disco with his crew and the whole club parts for him and every single person is shaking his hand or saying hello to him? That's my life. If you see that happen, that's the guy. Except I think most LEGENDS roll solo. I do, anyway.”

“There is a very fine line between being a scene legend and being the creepy old guy that still goes to shows. As best as I can tell, that line might just be the waist line, too, because so long as that's still looking good, the 18 year old girls are still lined up.”

Musical Taste: "That's a good question. This is what I know: When I was very young I knew EVERYTHING about music. I knew the names of every individual member of every band, and which other bands they were in, what labels each record was released on, and on and on and on. But as I got older and I became more established, I quit talking about music altogether, and none of that was required anymore. I didn't care anymore. I didn't have to know shit about music or anything else, really, because my cred was beyond questioning. And not to mention, it's way cooler to hate music than to like it. We all know that."

Dave: What if you're just some dude who doesn't know anybody and you spot a scene legend at a party? Any hope of befriending him outta nowhere?

"None. Well, at least there is no chance of befriending me. I mean, I suppose there are different types; you might win over a coked out scene legend or a pothead scene legend by offering free drugs. But as for me, there is no hope unless you know somebody that knows me. Actually, I thought of another way I make friends with kids. I’ve put up out-of-town bands for years. A decade or so. So I’ve got friends in bands all over the country. Some of them are really good bands and some of them are pretty fucking terrible.”

Dave: So being in a band might be a way in?

“Yeah. But being in a band is most peoples’ way of becoming a scene legend, too. I had to get by on looks, wit, charm and force of personality!”

Benefits of Friendship: “Well, if you're with them you might get into places for free, or get to bypass lines. You might get free drinks. And girls will talk to you because they're going to assume you're really cool.”

Drawbacks of Friendship: “Your name never comes first. Like someone would say ‘did you just see Jonathan and Dave?’ Never ‘Dave and Jonathan.’ And also, then somebody might mention your name to someone who is unclear about which Dave you are, so they'll say ‘you know, he hangs out with Jonathan Williamson.’ And that has got to be fucking annoying.”