"I hope you learned your lesson. No one should have that many Shirley Temples. You're lucky you passed out on your side or I'd have a dead son instead of a soiled rug.

"You threw up on your 29 costume too. I put it in the washer, against my better judgement: I wanted to burn it."

"I know you probably think I'm a bad father, or at least naive. I'll admit I didn't get it at first, your artwork. It seemed pointless - just different 29s from different angles. It didn't tell a story or even represent anything, besides 29, whatever that meant. To me it's the number between 28 and 30. When I asked you what it meant, you'd change the subject.

"For awhile I thought it was one of those memes, like Andre the Giant. But it seemed too common; there are 29s everywhere, calenders, phone books, elevators. Then I thought it was mathematical, so I asked your calculus teacher. He said it had no significance.

"Finally, I Googled it.

"I'll admit I was shocked. I know kids are into weird stuff; I was too in my day. My dad never understood it, but he accepted it. When you were born I said I'd do the same. Whether my son was gay, a communist, a rockabilly - I'd live with his choice. But this? This violates every rule I was raised by. I can't believe it's not outlawed.

"Still, I tried to be accepting. I didn't say a word when you wore your costume to the company picnic, although my coworkers' laughter really put the knife in me. I even hung some of your art on the fridge, even though it's been giving me nightmares. 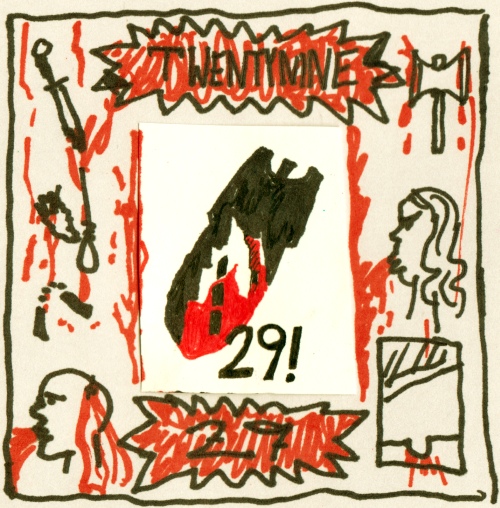 "Maybe I have been a bad father. I know your binge was in response to tonight's fight. When your mom and I divorced I vowed to stop drinking. Now I remember why. That drawing on the fridge meant a lot to you, as hard as that is for me to grasp, and I shouldn't have destroyed it.

"I just miss how it was before. Remember when I used to take you to the zoo? It wasn't much but it was something. You always loved the animals, except the crocodiles; you thought they were monsters. One day the zookeeper made a joke about throwing kids to the crocodiles and you started crying. I told him to apologize and when he didn't I punched him in the mouth. I promised that day I'd always protect you from monsters.

"What ever happened to those days? We used to talk all the time. Now you come home and go straight to your room. At night I hear you video-chatting with your online friends. They sound like people I'd like to punch, but what can I do?

"I think I know what happened. Monsters got my son after all.

"Anyway, I just want you to know I'm sorry. For tonight, for leaving your mom, for not spending more time together, but most of all, for breaking my promise.

"I guess that's it. I'm glad you're okay. And that you're still passed out, or this would be a lot harder."

He left the room. I heard a shot.