Gabriel's Homepage, submitted by DeLacey. Well, this site is a work of art all right. This dude has done a lovely job of breaking up his site into one freakish category after the other. In the section labeled "The Pack," one finds this horror: 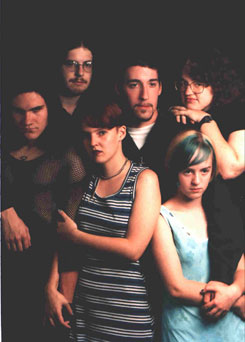 My friends and I have formed our own family. They say that you can't pick your relatives, but we have. We have sworn in blood not to abandon or turn on one another. Some of us have not been able to keep that oath, but the core five members have been steadfast for four years. Our love goes beyond friendship. Blood may be thicker than water, but blood can't fill the oceans. Each of us has suffered, each of us has been abandoned and betrayed, but none of us has given up. We have a safe place with each other.

Well that's just creepy. Judging from the picture of those people, there is a reason they stick together. They are so freakish that no one in their right mind would ever associate with them outside of their little incestuous group, anyway. The idea of their mixing bodily fluids is not a pleasant one, either. Would the person who owns the t-shirt with the wolf howling at the moon please stand up? WOAH, THEY ARE ALL STANDING!

Our pal Gabriel also has a page full of his pets, and this guy has a zoo. He owns what appears to be nine cats, four dogs, a rat, a hamster, and a bunny. That is a lot of animals to inhabit one house. He must be one of those crazy people who accumulate animals like some people collect cd's. Then one day the police come to him house and find that the animals are in horrible shape and half of them are in the process of eating the guy's face off.

WHAT A SHOCK! He plays roleplaying games. I don't know about you, but this catches me completely by surprise and I AM NOT BEING SARCASTIC AT ALL which you can tell by my CAPITALIZATION of certain WORDS.