Dirt Den Inn, submitted by Rayzak. Proving that furries can be every bit as obsessive and nerdy about their sexualized hobby as the biggest Star Trek geek is about the phaser bank power output on a Falchion class battlecruiser, Dirt Den Inn is an exhaustive and geeky read. The owner, a fatter and creepier version Rollie Fingers, has nearly as much text and nearly as many images as every other furry site I've seen combined. Being a furry and all many of the images and much of the text relates to his equally creepy alter-ego "Camstone Fox". 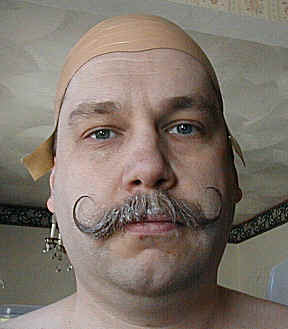 Here I am, with a soaped up mustache and a bald cap. The soap is an idea that Kamau sent me, to use soap over any exposed facial hair. I used bar soap, softened with warm water, and applied in very thick layers. Also the bald cap tabs next to the sideburns were stuck down with some medical adhesive that Boogi had. The bald cap is a thick reusable kind, that I got for $6 at a local costume shop.

AAAAAGH! He isn't just a creepy furry with a villain's handlebar mustache though, he's also a plushie. That's not enough? Well, he also writes unbelievably horrid goth poetry about being a furry.

There is a section of the site entitled "Rumble Purr's Whelpday," and so help me God I don't have any idea what that means or is, but the name of it pisses me off so much. These people need to be treated like convicted sex offenders and be forced to announce themselves whenever they move by apologizing to all of their neighbors for lowering the property value and scaring all of their children. Or, best case scenario, some weird religion rises into power and just sends inquisitors roaming across America burning them at the stake for being horrible in general. But I guess I'm just a motherfucking "mundane" and don't understand what it's like to be "fur" and "yiffy" and "fucking retarded".

PS: Be sure to check out these award-winning links on the aforementioned furry horror's website:

Instructions detailing how to make your own VERY OWN fur suit and finally realize your lifelong dream of DRESSING LIKE A RETARDED HUMANOID FOX.

Lyrics to a furry blues song! Don't worry, it's not as horrible as you think it would be; it's actually much, much worse!

PPS: Why? I mean... why? Just why? Why do these people exist? Why do they fantasize about engaging in sexual intercourse with animals? Why do they think that there's nothing wrong about this and we should embrace their humiliating lifestyle? I guess we here at Something Awful just don't understand the lure of fat, balding, bearded white guys in skunk costumes patting each other on the ass and talking about which character from "Duck Tails" they'd like the hump the most. It's a truly remarkably deviant lifestyle, one so far from reality that only the Internet is capable of bringing such freakshows together and encouraging them to promote their own idiocy on a grand scale. The whole reason we have so many furry websites as ALoDs is because so many of them are, well, really awful. We continually swear to stop showing furries as Awful Links after each day one makes the update, but then we find another site which tops the previous in sheer insanity. We sincerely apologize to all readers who are sick to death of furries; trust us, we are too. The whole furry lifestyle and mentality is just so fucked up that it's hard to resist the lure of portraying their sheer insanity whenever we come across it, which is obviously far too often.