C-P's World of Muscle, submitted by Accidental Google Result. I suppose this site is pretty damn good if you're a fan of drawings of grotesquely muscular women in provocative poses. And really, aside from humanity, who isn't into that? In this inspiring gallery of muscular women, fairly famous artists such as Boris Vallejo and Simon Bisley share the spotlight with upcoming artists like "Iczer", creator of terrible anime drawings of women with breasts the size of school buses. In science, they call this a level playing field. 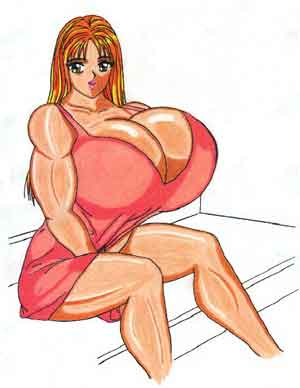 Somebody sure has a normal view of women.

If you have some modicum of taste then I'm sure you'll want to avoid this site in much the same way you would avoid looking at a woman twice the size of Arnold Schwarzenegger, especially if her clothes happened to explode off revealing muscles with muscles that somehow have larger muscles on them. That sort of stuff is just not supposed to be. 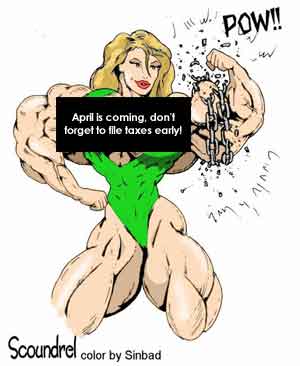 This picture took two human beings to make. TWO! Three if you count the helpful advice I added.

Given that some of these people are professional comic/fantasy artists, not all the featured art is horribly ridiculous, but that's not saying much. One need only look at the galleries for "Iczer", "Scoundrel", "Morgalla," and "Mr. Shhh" to put the fear of gay in you. As you might have guessed, some of these images would be deemed "not safe for work" in addition to already being "not safe for human viewing."