No Love for Asher Roth 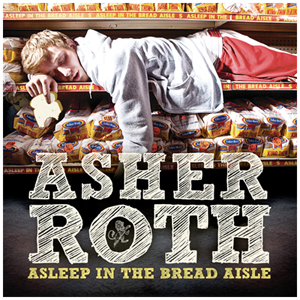 Asher Roth likes to say things like "you can't judge a book by its cover," but if I saw this image in the hip-hop section of the local Wal-Mart, I'd say "what the fuck does this asshole write about, roller-blading and beer pong?" If given enough time, I'd probably guess that he might sample Weezer and "jam" with John Mayer. Really, I don't think a cover has ever been more damningly accurate regarding an album's contents. It's like it's encoded with Braille dots reading "Warning: contains horrible suburban rap."

Asher Roth's Asleep in the Bread Aisle appears in stores on Monday, April 20. "But records usually come out on Tuesdays," astute readers might assert. Yes, but Asher is making an exception to have his album arrive on 4/20. Of course, other than children young enough to care about birthdays who were unfortunate enough to have entered the world on that date, anyone who makes special 4/20 plans is an utter fucking moron.

Thanks to the ridiculous single "I Love College," thousands of stoners will take a break from parading around in pot-leaf costumes to buy Asher Roth's 4/20 release. Unfortunately, they won't be alone. Asher raps about smoking weed during "I Love College," but he also speaks glowingly about pizza, women, keg stands - pretty much anything a generic dude-bro would consider cool. "I Love College" feels like Asher took all the lame applause-baiting banter that takes place between songs at rap concerts ("Who likes to get high?", "Where the ladies at?") and stuffed it into a pandering anthem for idiots who enjoy bonding over obvious pleasures.

While the presumption is that "I Love College" appeals largely to university students, a quick perusal of Asher's MySpace page reveals his true fanbase: High-school illiterates. Not that the campus dregs won't embrace this dopey ode to "awfully crazy" parties, but college students who like Asher Roth are as intellectually stunted as high-school students who obsess over High School Musical, or middle-school kids who still play with Elmo. 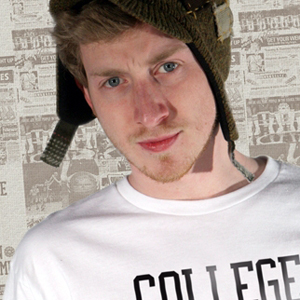 Asher Roth's Internet defenders insist he's about more than just "I Love College," much as the now-extinct fanbase of the similarly whimsical and non-threatening Skee-Lo once contended that his genius extended beyond "I Wish." Let's address a common claim made by Asher's misguided supporters.

Seriously, Asher Roth is nice on the mic! Dude is sick!

First of all, shut the fuck up. Secondly, listen to this 20-minute freestyle in its entirety. If you somehow survived it without violently deafening yourself and you still believe Asher to be an elite lyrical talent, you exist in a profound delusional state and there's no point in communicating with you. Just float away in your hover car and leave the rest of us alone.

To be more than fair, though, I'll reserve specific criticisms for other songs. I'll also demonstrate my fluency at his flawed techniques, to prove he's not that fucking special.

Asher Roth: "Spank that fanny... I am a fan of Dakota Fanning... My Sean Penn-manship is fancy."

Isolate that last line for a second; it's far gayer than Milk. No remotely listenable rapper would ever recite these embarrassing phrases. Even MC Chris thinks this guy's a pussy.

Garbage Day: "Thump that rump... I bump Patrick Stump... Rhymes are Sher-man, fat like a Klump."

Asher Roth: "Official minstrel for the Buddha/Get Rick Roll'd/I'm all about the moolah."

Hey, a thing exists on the Internet, and I've referenced it without context or comment! This qualifies as clever wordplay, in the same way that the pointless rapid-fire pop-culture references during Scary Movie and its ilk could be considered trenchant satire.

Asher uncorks the first line during his horrible aforementioned freestyle, then uses the second during the unrelated track "Throw Some Water On 'Em." So, either he resorted to quoting a previously written verse during a freestyle, or he thought his unremarkable action-figure reminiscence was important enough to preserve.

Asher Roth often rhymes words with themselves. Here, he disguises it as wackiness; during "I Love College," it's whoa-stoner-deep ("Time isn't wasted when you're getting wasted.") Either way, repetitive rhyming is the last refuge of an incompetent lyricist.

Garbage Day: "People ask me 'are you a fan of Asher?'
No, goddammit, I'm a basher of Asher."

Anything else, Asher fan?

Well, Asher Roth's bassist Chris Lewellyn is a hero: He subdued an airplane passenger who made a bomb threat and stormed the cabin.

At least he's achieved something in his life, because being Asher Roth's bassist is a complete fucking non-accomplishment. It's like being one of those old session musicians toiling in the shadows at Britney Spears concerts, but instead of playing the world's largest stages, he can look forward to 2012 gigs at - where is Afroman playing these days? - Ok, Western Kentucky University and the Frat House in New Orleans.