Tuesday, May 27, 2003 by Rich "Lowtax" Kyanka (@TwitterHasBannedAllMyAccountsEver)
Know of an awful site? Send it to us and become a hero!

The Crystal Children, submitted by Coast to Coast AM. Doreen Virtue, Ph.D., is one of the leading scholars regarding Crystal Children. Hell, she might've gotten her Ph.D. in Crystal Childrenology, although I'm guessing she received her doctorate in something much more technical and advanced such as piano tuning or interpretive dance. According to Dr. Virtue (isn't that a Marvel superhero name?), there are "Crystal Children" who are psychic geniuses with the ability to have large eyes and let people write books about them. Some Crystal Children are dubbed "Indigo Children" because they're older and when you're a Crystal Child and grow old, you naturally become indigo. Eventually you become a Teal Child when you hit the age of 90, and if you pay your Crystal Child monthly dues, you will be given the option to upgrade to a Neon Magenta Child that has 50 additional hit points and a strength bonus of +2. 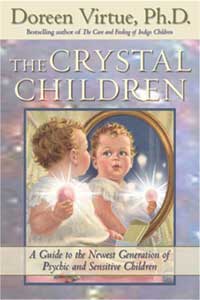 Perhaps you've noticed this special new "breed" of children rapidly populating our planet. They are happy, delightful, and forgiving. This generation of new lightworkers, roughly ages 0 through 7, are like no previous generation. Ideal in many ways, they are the pointers for where humanity is headed . . . and it's a good direction! The older children (approximately age 7 through 25), called "Indigo Children," share some characteristics with The Crystal Children. Both generations are highly sensitive and psychic, and have important life purposes. The main difference is their temperament. Indigos have a warrior spirit, because their collective purpose is to mash down old systems that no longer serve us. They are here to quash government, educational, and legal systems that lack integrity. To accomplish this end, they need tempers and firey determination.

Oh no! Wait, I mean oh good! No wait, I don't know what I mean any more. I suppose the Crystal Kids are here to help us by giving the government "integrity" somehow, like maybe they'll get elected to Congress and then fail to cheat on their wife or something. That would be pretty integritatious. Keep in mind that Crystal Children can technically be aged "0," so many non-existing people out there may just in fact be a psychic Crystal Child who is attempting to reform the government despite the fact that they have failed to be born. The site also comes with a "Crystal Children Message Board," which is about as incoherent and slow as the site's author. The topics range from the eternal debate of "is my Crystal Child an alien?" to "is my Crystal Child channeling an Indigo Child?" Both of these questions have been weighing heavily on my mind lately, as I have a 0-year old boy whom I fear is a Crystal Child channeling an Indigo Child channeling an alien. Forum member "Kubyx" makes the following exciting revelation in one of his / her / it's exciting posts:

I became a Christian when I was 7 years old, and followed it until i was about 15 and then dabbled in Wicca, and became Wiccan from 16 - 22 years old (I am 22 but will be 23 within a few months). I went to a local church about 8 months ago, and I was possed by 3 dark spirits (demons), which were all cast out of me, and I havn't been Wiccans since, for the record I am in no way saying Wicca caused the dark entities to enter me. I have no idea what they were, but my dad seen them. They took me over, I was blinded (literally), and crawled around on all 4's, my voice became that as roaring... it was so loud people in the church said it sounded as if a train was rolling through the church. I asked Yaweh to take them away from me, and they were immediately gone and I laid there as if I were dead... so now I do know spirits both good and bad DO exist!

Several years ago I had a friend who is a "starseed", I always called her nuts, but never ment it in a mean way, her and one of her other starseed friends, said I am Pleadian, but I dunno how true that is, nor do I know how to tell if I am or not.

UFO's, aliens... give me an awkward feeling... when I watch documentaries, pictures, etc on UFO's and/or aliens I tear up, i'm not sad, not mad, not scared... but I tear up... they flow really hard and my speech is really garbled... I have to force the words out, and I get this weird feeling in the pit of my stomache. What causes this?