While Vampire: The Masquerade was bringing the "new seriousness" to tabletop gaming in the United States, Kult appeared in Sweden presenting its own brand of humorless horror. It finally made the translation to the USA in 1993 where it developed a very small but devoted following. Kult was a morbid role playing game along the lines of Call of Cthulhu. It dealt with cults, demons and the supernatural and was set in present day. In Sweden, Kult was a source of public panic and outrage a lot like Dungeons and Dragons in the USA in the early 1980s. One of the reasons for its reputation was the creepy esoteric art featured throughout the book. Thanks to reader Olle Joersved for the suggestion! 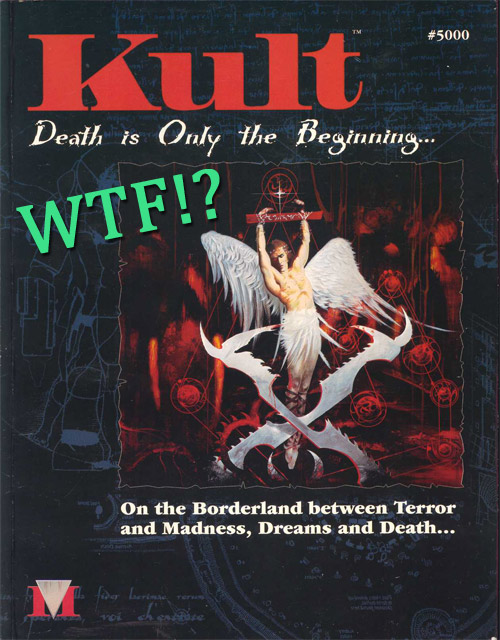 Zack: Did you ever play this game?

Steve: No, but I picked up the book many times at the hobby shop where I used to game and thumbed through it almost too afraid to do much more than look at the pictures.

Zack: It definitely announced itself as something different. I remember it had a warning label on the back. 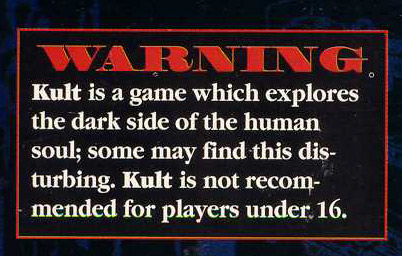 Steve: Yes! That was a big part of what made it so enticing. The other was how the artwork was so weirdly muddy. Everything was a collage and it felt like you could go crazy just reading it.

Zack: There was blood in the margins too. They did a good job for 1993 of making a worse version of Call of Cthulhu feel dangerously esoteric.

Zack: One of the chief public health threats to infants and toddlers at the time. Drop side cribs, choking hazards on action figures, and bloody hooters.

Steve: Be warned, dude. The next couple pages may feature a bloody hooter.

Zack: You know me. Always on the lookout for bloody hooters.

Steve: Where else might one find a bloody hooter?